Another Kind of Dark Cloud 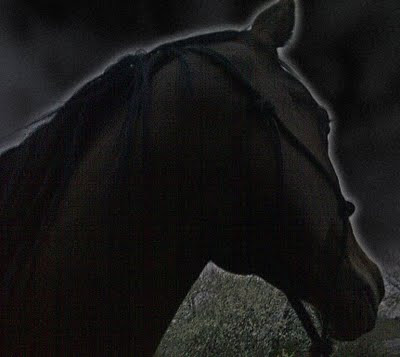 Since there are still days I am wearing a heavy coat to the barn, I believe we haven't quite broken the grasp of winter. But unfortunately, that is the last thing us horse types have to worry about right now in our world. Unless today is the first time this week you turned on your computer or looked at Facebook or other horse lists and blogs, you obviously know about the threat of Equine Herpes Virus (EHV-1).

In the past, many of us referred to EHV-1 as the rhino virus and were concerned primarily about any bred mares. Most often a respiratory disease among our herds, not pleasant, but certainly not deadly that I knew of. Today we think differently as it is neurologic, not respiratory, and it is deadly. Lest I say something medically incorrect, Google & you will find out the particulars. I found a blog post by Tanis McDonald DVM extremely helpful and written in layman's terms.

To date, no cases have been reported in Nebraska, but the Nebraska Department of Agriculture reports that five horse barns in our state are currently under quarantine. The good news is, none of the horses quarantined are exhibiting symptoms at this time and we are about at the end of the incubation period. Horses in these barns were at the Western National Championships in Ogden, Utah, April 29-May 8, where this outbreak was first reported. Since then, cases have been reported in several states, including counties in neighboring Colorado, all linked to this event. This is getting too close to home. A table of states with exposed or infected horses can be found here.

I had entered a competitive trail ride scheduled for this weekend down in Kansas. Hearing about EHV-1, I consulted a trusted vet. He was guarded about traveling out of state and exposing Windy to fifty other multi-state horses until we learned more about what kind of outbreak we were dealing with. It was an easy decision to pull from this competition. There will be other rides.

I still plan on trail riding but limiting my exposure to other horses and popular places. I'll avoid large groups and activities, riding primarily with friends who also stable at home and who aren't around a mass amount of horses. We'll take the trail less traveled. Am I eliminating risk entirely? No. I don't think that is possible. But I am managing the risk by riding with people I know who can track the whereabouts of their horses as easily as I can my own. At this point, the odds are in our favor that we will not contract this deadly disease but I am smart enough to know that no plan is fail-safe. I don't believe the sky is falling, but I do believe horse owners should be aware of what is going on with this disease and take biosecurity measures to protect your horse or herd.

It's always something, isn't it?

What about the rest of you? What, if anything, have you done to change your riding plans?