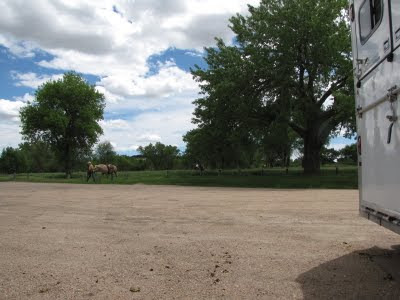 It's funny that a few of you mentioned the back story to my previous post "Back Home Again". That post started out being a longer post and then I thought it was only interesting to me or it was one of those "had to be there" moments. So I kind of left it at that. But since you asked…

Things I learned on my long weekend:

The information we received for the Peckerneck Trail said the long loop was 14 miles; about a 6 hour ride. We try to walk out about 4 mph; sometimes faster, sometimes slower, but on average. So we figured we could do this loop easily in 4 hours; even stopping for lunch. Well, by the time we 4 miles out, we knew there was no way we could come close to doing the loop in 4 hours and 6 would be pushing it! The climbs were a lot more than we anticipated and it was an early ride for a few of the horses. We did a 4 hour ride, but only covered a little over 8 miles. So yes allow at least 6 hours if you are going to do the 14 mile loop. You will need it. 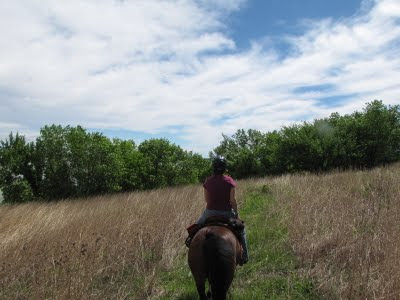 Most who know me know of my incredible fear of snakes. And it's not just an "oooh, they are icky" thing. It is a pulse-quickening, heart attack feeling, and an uncontrollable, full-blown phobia and if anyone even thinks about scaring me with one, our friendship will be over. And I'm not lying. It is that bad. I used to have nightmares about snakes; would lie in bed yelling for my mom to come turn on the light to make sure none were on my bed. (There never was.) But the fear is very real to me even today. Obviously, there are snakes on the trails. But my friends all know that if they see one, make sure I am far, far away and if they are sure I won't see it, just don't mention it. And it works just fine that way. The one time the girls saw a rattle snake, they waived me past. I was riding Ginger and we ran 28.8 mph to get out of the vicinity.

So on the Peckerneck Trail; I am the 2nd rider, following Jessica on her lovely bay mare, Babe. I notice that Babe has stepped over some driftwood and it is up around ankle high. And no sooner than I can process that, the "driftwood" is moving, looped in the air like a garden hose. It's not driftwood, it is a snake. Babe either stepped over or stepped on a frickin' snake! I scream like a bitch and holler "Run!" "Now!" I am not sure if Jessica understood what was happening at the moment, but she and Babe moved out and I was on her heels. John, who was behind me, catches up and tells me I shouldn't scream like that because the snake could get confused and scared. Did his lips really move? His wife just about had a coronary on the trail and he is worried I scared the snake? 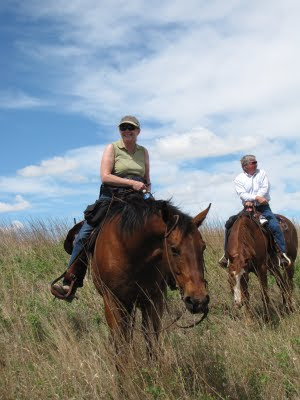 My friend, Joni, brought both of her show horses. The older one is retiring this year, the younger has seen more trail miles than show hours in the last few years. While the older one was not as sure footed on the trail as he is in a trail class, whenever we would line up for pictures, he would strike a pose as if waiting for the judge. And I am sure he thought as soon as the picture was over, the class was done and we could go back to the trailer now. I am sure he yearned to go back to the trailer!

If you think a horse fell in the trailer, you probably blew a tire

After leaving Peckerneck, I am following my friends, and John, in the chase car, is behind me. All of a sudden I feel my trailer jerk. My first thought was one of the horses fell. I put on my blinker to pull over, glanced in the mirror and saw a lot of traffic behind me, including a semi bearing down on us. There was no shoulder on the road, only dirt and a sharp drop off. I had nowhere to go. I sped up hoping the next intersection was approaching and about that time, I felt the trailer again & my chase car is zooming around me and hitting the brakes in front of me, slowing me down even more. The semi throttles down and passes me; never mind that it was on a hill. We approach an intersection and I turn off and stop. John pulls over and comes up to the window & said "did you know you blew a tire?"

Truth is known? No. I didn't. Usually, anytime we have blown out, I am the first to know it. But the feel was different and then when I saw the traffic behind me and no shoulder, I was just thinking about getting off the road and finding out what was wrong. John said he thought I was speeding up and didn't want me to ruin the rim, so he passed to slow me down. I wasn't speeding up so much as just looking where I could get off. Although I can change my own tire – just changed one on my bumper pull a couple weeks ago – I was glad my chase guy was behind me and could take care of it for me. 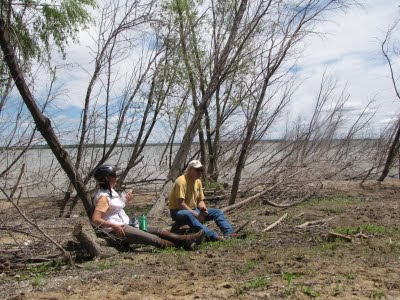 Although we were trailering and riding, we weren't really camping out, per se. Although we ate on the trail on the 4 hour ride, it was kind of fun after our rides to go hit the local bars or Mexican restaurant and eat out; wearing spurs, smelling like horse – but not having to cook. Don't get me wrong, I love camping and the whole 9 yards, but we don't get to eat out with our horse friends often enough, so this was a rarity and a pleasant change.