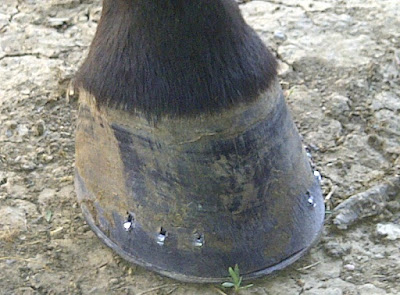 The farrier was coming tonight. Pedicures for all; but I was on the fence about shoeing Windy. I'm not anti-shoe, per se. But I like the fact that she has tough, black feet and has only been shod three times in her nine years. I have two rocky rides coming up; one that she did barefoot last year and the second that some have said they shoe their horses for that particular terrain. Others, myself included, have thought boots would work. But in the end, I decided to shoe her. Then Ginger can wear Windy's boots on the rocky road ride next week & Windy's feet will be good for both rides. Just made more sense. (Ginger won't make the 2nd ride.) 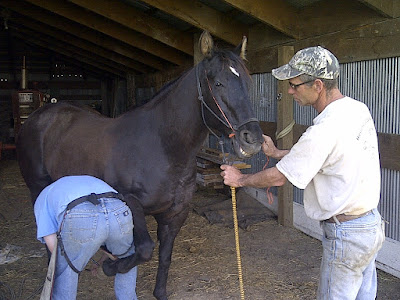 Blue has had issues with the farrier the last couple times. He has always had a "hitch in his giddy up" and I contributed his naughty behavior to soreness in his ankles. I had John bute him earlier today in hopes of alleviating any stiffness and seeing better behavior. Ah, that didn't work out so well. And I had to laugh when my farrier said, "he's not sore, he's a prick." So there you have it. He took a piece of twine and ran it over Blue's poll and into his mouth and onto his gums. John was to apply pressure when Blue misbehaved. Funny, he stopped misbehaving. 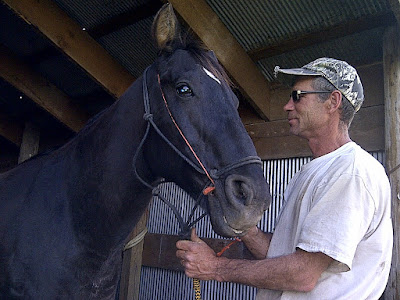 I flashed back 10 years; our first farrier had to set the ground rules using this same technique. Wanna bet Blue won't be such a "prick" next time?
- May 10, 2011