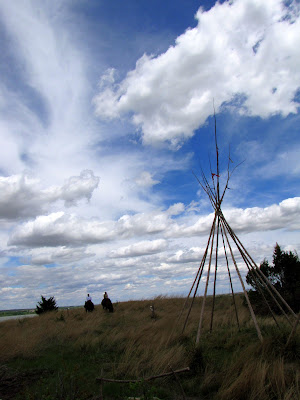 John and I got the horses loaded early Sunday morning and we were on the road to the famed Peckerneck Trail at Harlan County Lake near Alma, NE. Continuing with my 70’s theme, it’s been a weekend kind of like Smokey and the Bandit with John driving the chase car while I pulled the horses. I only wish I got the gas mileage he was getting.

Harlan County Lake is Nebraska’s second largest lake and provides a dam for the Republican River that runs along the Nebraska/Kansas line. The Peckerneck Trail is along the south side of the lake, overlooking the water and the small town of Alma. 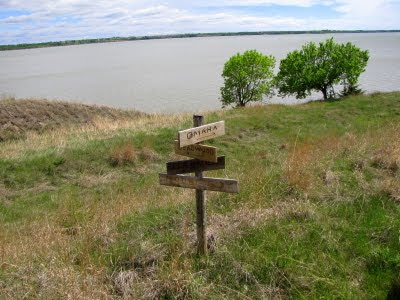 Custodians of the trail (for lack of a better word), Dave Wolf and Alan Zastrow, brought the Peckerneck Trail to life after finding the old horse trail about a decade ago. With their own funds and volunteer hours, they cleared, mowed, rode, promoted, added signage, items of interest and generally cared for this long forgotten trail so people like me can enjoy it. Nebraska Rural Living shares a wonderful story about the trail and the efforts of these two ambassadors of horse trails. 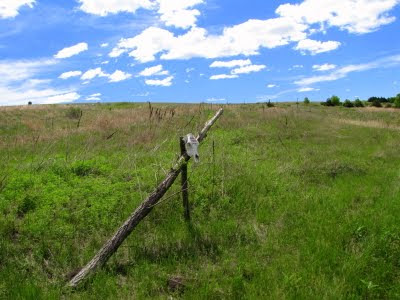 We met our friends at the trailhead; there was seven of us in our group and we were the only horses on the trail. After fitting the borrowed saddle to Ginger, packing our lunches, we headed out along the trail. It was our plan to ride the 14 mile loop; the longest. There were other loops to shorten the distance but given our early start, we had no doubt we could do the distance. 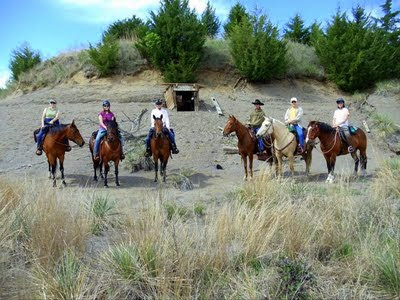 Our first stop was at the Peckerneck Mine; a creation of Dave and Alan to serve as an item of interest as well as a fundraiser for trail improvements. According to the aforementioned article, "the Origin of the Peckerneck Mining Company Legend has it that a group of raw-boned hillbillies from Tennessee came to the mining district of southwestern South Dakota in the 1880's. These men were extremely adept at running the hammers and steels (rock bits) used to drill the holes in the mine face where the blasting powder was placed in order to break up the ore. The speed and agility these men had was said to make a sound that echoed through the mine tunnels resembling that of a woodpecker. Other miners claimed that only a man with the strength and agility equaling that of the neck of a woodpecker could accomplish such a task. Thus the term "peckerneck." was given to this group of men." 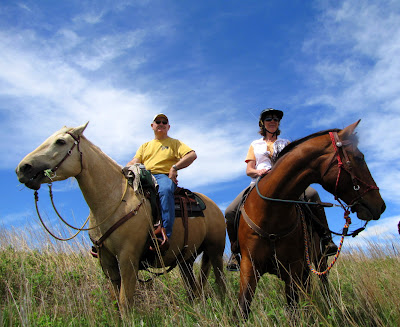 I mentioned to the Horsetales group that the view of the lake was beautiful, but it certainly played second fiddle to May's blue sky. 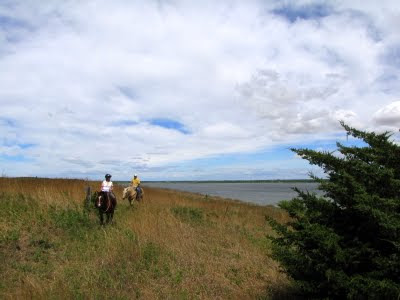 The trails, at first glance, would appear to be novice trails, through the meadows and hills above the lake. But the farther along we rode, we realized these trails were much more challenging than we originally thought. There are some big climbs to the high peaks and lots of switchbacks down to the canyons and streams. We weren't making near the time we though we would on our 14 mile ride. 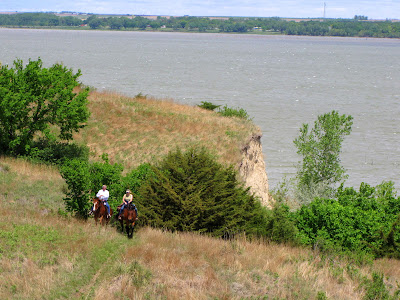 We would stop at the top of the hills, let the horses catch their breath while we took in the breathtaking views. There was plenty of time for photos; I finally just put my camera around my neck rather than keep pulling it from my saddle pack. 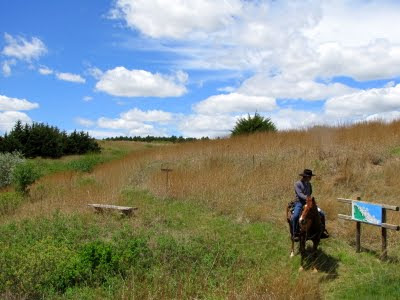 We stopped for lunch about two hours into our ride and at that time, checked the GPS and decided we probably wouldn't make it the entire 14 miles. Some of the horses hadn't been out much this spring and given the climbs, it wasn't fair to push them on. We decided to take one of the loops to shorten the ride, headed north and continued to Bailey's Pond. Again, Dave and Allen took the time to put in hitching posts and benches so riders could take a break and enjoy the view. 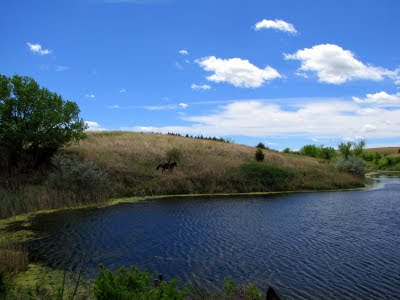 Jessica skirted Bailey's Pond to find an area to water her horse. The reflection of the sky on the water made it appear much bluer than the lake itself. I think I took ten pictures of the pond itself. 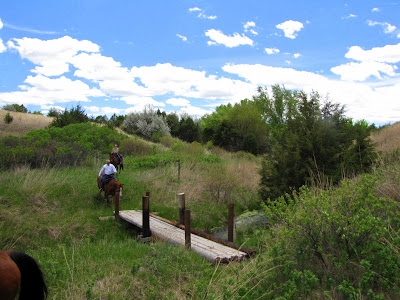 Bridges have been put in so riders can cross the more boggy areas. 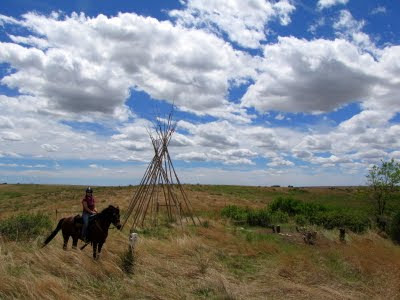 Another point of interest, the tee pees, complete with an Indian campground.

We rode just under 9 miles on the Peckerneck Trail. If duty didn't call for many of our group, we might have stayed the night and did it again the next day. I certainly would like to return and do the entire trail. Having cleared our own Oak Creek Trail, I understand and can relate to the passion and satisfaction that Dave and Alan must feel toward "their" trail.

We met Dave at the trailhead following our ride. He was mowing; are you not surprised? After visiting awhile, he mentioned he was out working on the trail one day and heard voices. He stopped and listened to the riders on the trail, laughing and enjoying the day. That is what matters the most to him; that people are having fun riding the Peckerneck Trail. We certainly did.