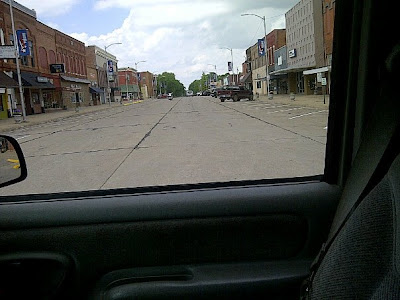 (Written on Saturday, published on Sunday... too tired to proofread.)

I packed the trailer last weekend in preparation for being at a competitive trail ride right now – today. But when we started hearing about EHV-1 earlier this week, I made the decision not to expose Windy to 50 other horses. "I don't know where you've been," sang Head East back in the late 70's. And that's how I felt about competing. Having no idea who these other horses were and what horses they may have been in contact with seemed risky at best. In hindsight, as the stats have been coming out, we most likely would have been okay. But the deal was done. I wasn't going.

"All revved up with nowhere to go!" (Meat Loaf). I wanted to go somewhere. With my horse. And not on a day ride. So I made plans to meet a friend later this weekend and ride out by her place, camp in her yard. As I mentioned my plans to John, he said he wouldn't mind heading out either and spending part of the time on the road. My oldest son had plans, so both boys stayed home and I recruited my niece to housesit and kid/dog watch.

We decided to head to my home town of Superior for the first night and then meet my friends the next day. I called my sister and brother-in-law who still live in town and ask if we can overnight with our horses in the camping area of one of the city's parks. They contacted whomever it is they needed to and permission was granted. And we arrived mid-afternoon. 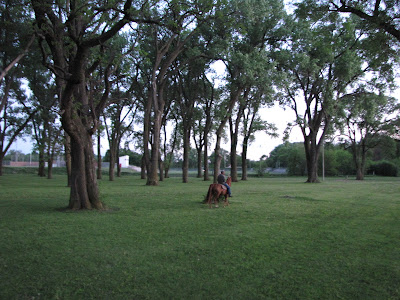 Oh, so many memories in this park. It has the best slipper slide. Tall and with one little bump that makes your stomach tickle. We used to take waxed paper and put it under our butts to make it slicker. We would fly don't that slide. I told John that I have been away from home 32 years. That slide was here when I was young. Heck, maybe even longer. I bet it is over 50 years old. I can't believe it hasn't been replaced with those cheap plastic things parks seem so fond of these days.

I plan to stay and ride through Monday, so John had brought his own wheels so he could return home tomorrow night. About halfway down here, it crossed my mind that I didn't load John's saddle. I was pretty sure he didn't either. I called him & asked. Nope. No saddle. He can borrow for Sunday, but for today he was bare backing it. 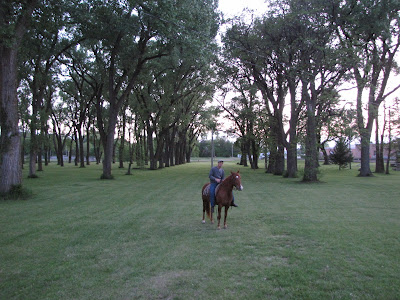 I saddled & John put the extra pad that I had in the trailer on Ginger. And we started to ride through the park. Oh, what memories. Dad used to get us these awful jobs; like once when a windstorm came through, he volunteered our family to clean up sticks in this park. We couldn't have been 10 years old and we were probably undiagnosed ADHD. Ride that slipper slide or pick up the sticks. I wonder how he ever got that job done. 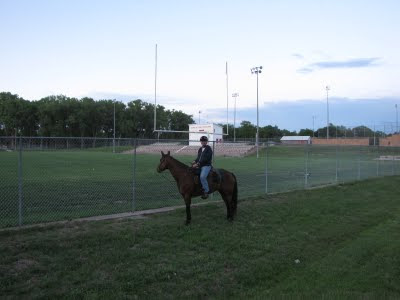 We rode down by the bridge to the football field. The creek would always flood and wash out the track around the field. I don't remember the bridge ever being washed out, but I wonder.

The cottonwood and pin oak trees are what you would call majestic. Just beautiful. I put Windy into a lope and we weaved through them like we were pole bending. We came back around the Boy Scout cabin (that girls used, too) and then made our way up by the high school. 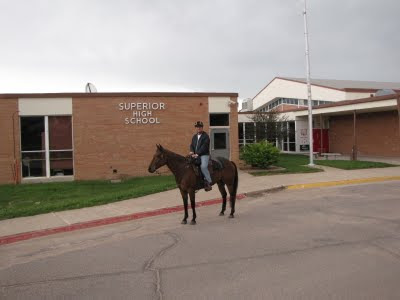 When I graduated in 1979, only the high school was in this location. Not long after, they built the adjoining Junior High. And this year, they are adding the elementary school. It was the last year for elementary classes in the buildings I attended. We rode to the front of the school and Windy stood nicely while we posed next to the entrance.

We rounded the school and came up to where the old Indian Trail used to be. I remembered the trail as up on the hillside to the north of the park. There was dirt road behind it and a trail that wove thru the hill. Not long, maybe the equivalent of two city blocks. The road was long gone. They built a new track to the north of where the road was. But there was still a mowed trail along the track fence. We followed it and then saw a mowed trail cut down into the hill. 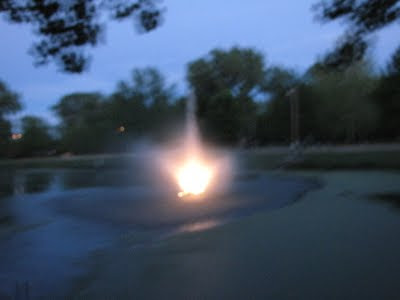 We went out again later and it was getting dark but we dropped down and followed it to the water. The pond, that used to be used for ice skating, now has a pretty lighted fountain in the middle. Our country horses gave a snort and were pretty big-eared about that fountain but kept on going. We thought we saw a trail going back up, but by now it was too dark to pursue it. We skirted the edge of the tree line back to our camp. 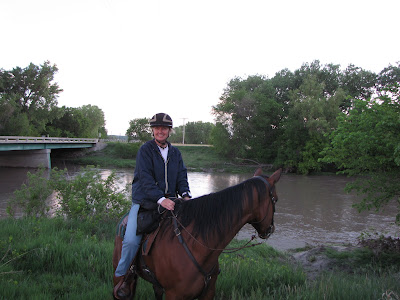 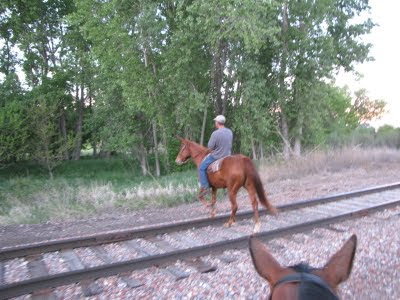 On the second ride, we headed toward the Republican River. It looks like a new highway was put in; the asphalt from the old one running parallel until it ran out right before the railroad crossing. We followed that old road and asked our horses to cross the railroad tracks and pleased that they did. We picked up an old service road and made it to the river's edge. It was up, with all the recent rain. I used to swim in this river; a scary thought today. 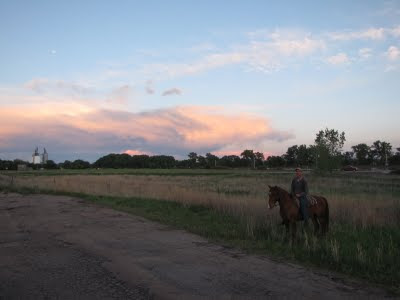 We followed another little grassy path that dead ended into a recently planted field. Then I remembered: this used to be the city dump! Remember those? Anyone could come with a truckload of trash, appliances or whatnot and just dump them on the pile. Amazing that ours was right next to the river! My, how things have changed. I couldn't help but wonder what all was compacted neatly under that corn field.

I had John shoot some pictures of me; something he rarely does. But it meant more to me that I am in the pictures than him. It was my hometown. (Bruce Springsteen).

My sister visited our campsite and had supper with us. I couldn't' convince her to throw a leg over a horse though.

My parents are both gone; when I am home I feel the void even more than I do every day.

I didn't do 25 miles today like I probably would have if I were competing. Today I traveled back in time and it was just as good.