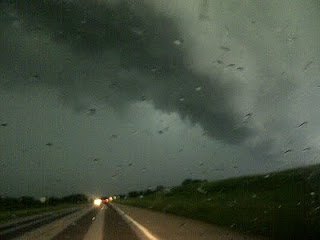 Yesterday was a Top 10 day.  The weather was mild, no wind; just perfect for camping.  We didn't plan to go camping but why not?  There are several parks/trails within 30 miles from home.  We have plenty of food in the refrigerator and freezer.  And it would just be for overnight.

I called John in the afternoon.  "Let's go camp at Two Rivers tonight," I told him.  While I waited for him to get home, I packed the cooler and ran to pick up Case's buddy who would camp with us.  We got to Two Rivers around 7:00.

We quickly set up the horse pens and then started a campfire to ward off the nasty mosquitoes.  It was getting late to ride, but figured we could get up early and go after our morning coffee.  The only other horse camper in the park was someone we knew; she shared our fire and right before we went to bed, she mentioned there was rain in the forecast.

Rain?  It was a Top 10 day!  I never even considered rain as a possibility.  My mind rewound to the weather bug on my desktop.  I seem to recall a 30% chance Saturday morning.  But that's like saying it won't rain!  I glanced at the weather app on my Blackberry.  Hmm.  40% after midnight.  Still....

I heard the crash of thunder a little after 3:00 AM.  And the rain started.  Then the hail banging against the roof of the trailer.  There was no sleeping in this tin can.  The lightning and thunder continued to roar!  An hour later, it still hadn't let up.  I imagined my poor horses standing in their makeshift pen, heads down; mindful of the lightning above them.  I imagined trying to get the truck and trailer out of the camping site.  Granted, the footing is pretty sandy, but still....

I told John we were leaving; that if he could get the truck and trailer out to the road and I would meet him there with the horses.  We put on our rain gear and stepped out into the dark.  Water was standing on the ground; it was ankle deep.  I shined the flashlight on the horses; they looked like they were standing in a small pond.  I led them over to the hitching post and John and I quickly took down the fencing.  John woke the boys and then started the truck.  He put it in 4WD and started to drive slowly across the grassy camp.  When I saw he had successfully reached the road, I led the horses over to the trailer.  We quickly loaded them and headed for home.

Note to self:  Check weather carefully before going on an impulsive camping trip!

(We weren't camped long enough to take any pictures.  The picture above was taken earlier this week.  We have had some humdingers of storms lately!)
- June 25, 2011