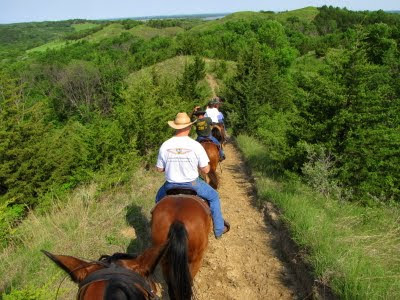 We spend a lot of time in the winter planning where to ride during the nicer months. When my friend, Jules, said she wanted to spend her birthday at Turkey Creek Ranch near Newcastle, knowing what a popular place this has become, we made reservations right away. Just a short 2 hour drive from home, I am surprised we don't get there more often than we do. The last time, you might recall I blogged about our Extreme Ride at Turkey Creek.

McCain was left to his own accord while Case stayed at a cousin's home. I liked when our boys went camping with us and miss this part of their growing up but it certainly is a lot easier having to pack for two less people and two less horses. John and I left not long after noon, hoping to get to Turkey Creek by 3:00 and for an evening ride. 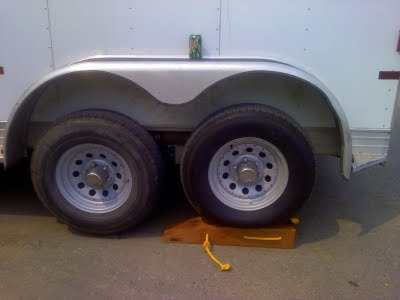 About 20 miles outside of Wayne, I knew a horse hadn't fallen in the trailer, but that we had yet another blow-out. What is up with this? Unfortunately, not only was that tire trashed, but it ripped out the break wires and compromised the tire in front of it. John put on the spare while I called ahead to find tires. We limped our way into the next town and they got us in and out quickly. Both the tires we lost in the last few weeks were the ones on the trailer when the axle was bent. After replacing the axle, we didn't replace the tires. It is possible they just had worn wrong or were aged out. I ordered another tire from our local shop and by my next trip, I'll have all new tires all the way around, so hopefully that will be the end of it. 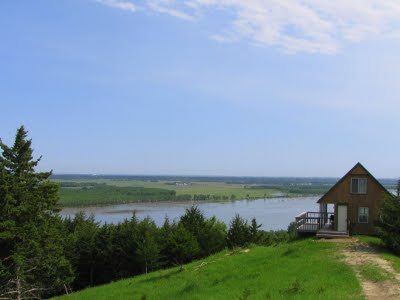 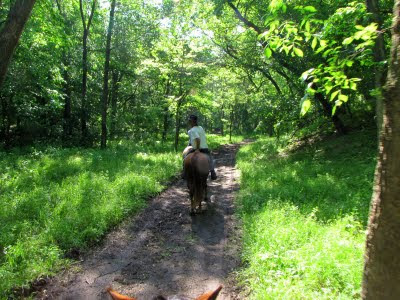 We pulled in to Turkey Creek about an hour late, the last in our small group. After unloading and setting up camp, we went for a short evening ride up to a lookout over the flood ravaged Missouri River and down through the trails we call the Enchanted Forest. The trails were as beautiful as I remembered. 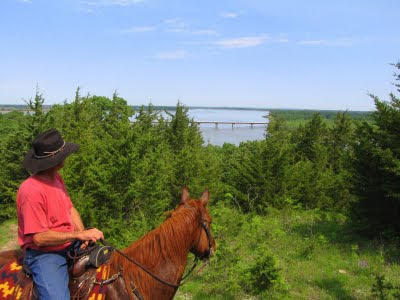 If you have been following the national news, the Missouri River is flooding and many people in Nebraska, Iowa and South Dakota are being evacuated. Some call it a man-made flood; for whatever reason water was not being released from the dam soon enough. Last Friday, Gavin's Point Dam began releasing water from the Missouri River at unprecedented levels, to release the flood waters brought on by this year's massive amounts of snow melt in the nearby mountain states. There is concern about why it wasn't released earlier but as our governor said in a recent statement, the focus right now is on protecting those affected by this disaster. Investigations of why will be addressed after the crisis. 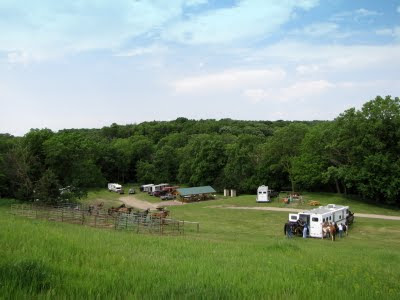 We rode again the next morning and evening, enjoying the campsites during the warmer part of the day. Turkey Creek not only offers the best trails and views in this part of the state but their campground is second to none. Full electrical hook-ups, plenty of water hydrants, pens for our horses and a picnic shelter for our group dinners. And rumor has it they want to put in showers next! Is this camping or what! If you don't have a trailer for camping or want to tent it, consider staying in one of the Turkey Creek cabins. You won't be roughing it At. All! 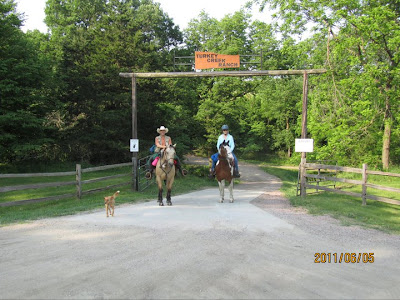 Colleen Hamer, the Nebraska Long Rider, joined us for dinner on Saturday night and departed Turkey Creek early Sunday morning. Her goal is to ride all around Nebraska, touching the adjoining states. It will be a 1,000 plus mile ride which she calls her "spiritual journey." As temperatures were predicted to hit the high nineties on Sunday, we, too, had an early morning ride and then packed up to return home. It was an uneventful trip home; we made it with all tires still up. 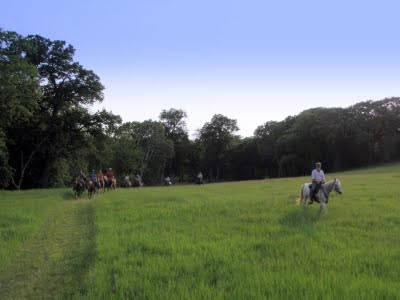 I've bragged up the trails and the campground at Turkey Creek Ranch, but I must also mention the owners of this place, Brenda and John Wortman, who share their paradise with horse riders. They are incredibly generous hosts and great folk to have around your campfire. Brenda, an accomplished equestrian in her own right, enjoys riding with her guests and can show you the good spots! Thank you, John & Brenda, for sharing your ranch with us again.

This weekend is a down weekend, recovering from being gone; buried in laundry and housework. The trailer goes to the shop for the last new tire and the brake repairs. Next week, it'll be "another tank of gas and back on the road again" (name that song).