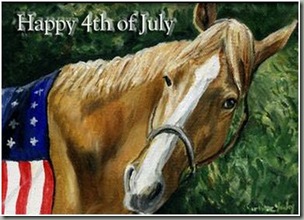 I spent a couple days with friends at a nearby horse camp.  It was the first time we were there this year; the trails were pretty overgrown.  We’ll need to take our weed eaters out there soon and do some clearing.  Luckily, only one trail was blocked and we easily cleared it with a trail saw.

After our second ride, Windy was a little off.  She had stumbled once and caught herself; I think she may have rolled her ankle a bit.  John was coming out the next day, so I told him to bring Butter along and I’d give Windy a break the rest of the weekend.  I soaked her foot and then gave her some bute.  I wasn’t overly concerned, but since I have a spare, why not use it.

Of course, it rained overnight.  Rain seems to be a theme with our camping trips lately.  It was iffy if the trails would be in good enough shape to ride.  We waited until closer to noon to ride out.  They were a little greasy in spots, but not bad.  John rode Butter and I rode Ginger.  Butter pitched a few fits early on (buddy-sour issues with Ginger) but he rode through them and she settled down. 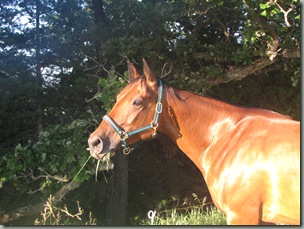 It wasn’t a long trip; rode just 24 miles, but it was nice to get away for a little while.  I didn’t even pull my camera out until everyone left.  Windy was quite aware that all the horses were gone from camp and as a result, struck some nice poses.

Backyard fireworks later (I am thrilled!) and then this loud holiday will be over.  The three day weekend was nice; the cause for the celebration noble, but I will be happy to be done with fireworks for another year.  You folks who live in states that ban them are very lucky.

This is my first post using Windows Live Writer as many of you suggested.  So far, so good.  Thank you for the recommendation.
- July 04, 2011