I mentioned awhile back that I was excited to be published in Saddle-Up Nebraska, a publication for regional horse enthusiasts.  I saw an ad in their magazine asking for readers to submit pictures.  Although I take hundreds of pictures, it seems like only a few rank as exceptional.  The one I took of Windy on the Mother's Day ride was in my opinion, a very nice shot for an amateur like me.  So I submitted it to the photo editor of Saddle-Up Nebraska.
I was thrilled when I got a note that she liked the picture and could use it.  She then asked for more information on the ride.  I shot her back an email telling her briefly about The Friday Before Mother's Day Ride, how it started and such.  I was surprised when I heard that the editor would like to use it for the magazine.  I might have spent a little more time on my email had I known.
Shortly after this story was published, my sister-in-law (married to John's brother) sent me a Facebook message teasing me about my lack of enthusiasm for the family reunion I mention in the article.  John's family is not horsey so I was surprised someone in the family saw it.  She works with a horse person who recognized the name and shared it with her.  My own sister also saw it via a horse person whom she knows.
Since the July issue has now hit the streets, I thought I would share my June story with you.  They also printed another story of mine for their July issue which I'll share with you when August comes out.  I am delighted they have given me an opportunity to submit my stories and pictures.
CLICK ON EACH PAGE TO ENLARGE TO READ 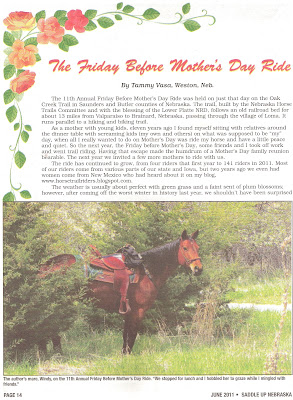 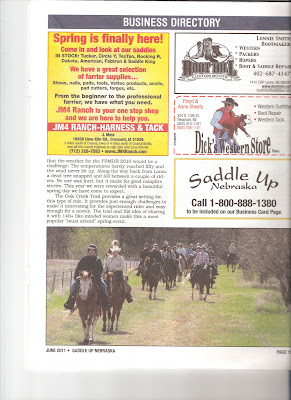