Last weekend when we were riding at Camp Moses, Windy stumbled.  She recovered without falling to her knees.  A little later when I moved her into a trot, she felt off.  After dinner that night, I trotted her in hand and we could all see there was a little hitch in her giddy-up and some puffiness in the tendon of her right leg.  I soaked her that night and gave her some bute.  Then called John to bring me another horse.  I didn’t believe it was anything dire with Windy, but enough to warrant some rest and it certainly isn’t like I haven’t anything else to ride.  I rode Ginger the following day and then took her out again when we rode on Wednesday with the Platte River Riders.  She fits easily into Windy’s tack, so the transition was effortless.


On Thursday, we had to check out the trails for the upcoming Trail Challenge.  I planned to take Butter but found her covered from head to butt in dried mud.  So I took Ginger once again.  I know I have mentioned here before that Ginger is Windy’s dam.  And luckily, my Windy is not as hot-blooded as Ginger, who has always been a pistol and has more than once scared me a wee bit.  But this particular night, she felt good under me.  At the first opportunity, I opened her up.  She is the most sure-footed horse I have ever rode; I swear she is floating above the ground as we flew down the road at 29.1 mph.  What a rush!


Saturday, there was a poker run at Two Rivers to benefit horse trails, so being that Butter had managed to clean herself up, I took her for this ride.  She copped a little attitude but for the most part, settled down for the day.  She is a fun little ride in her own right.  I am glad I have spares. 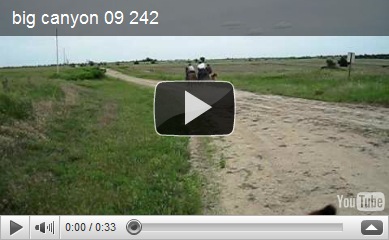 The above video was taken in 2008.  McCain was on Ginger (right), Case on Butter (left) and John on Blue (middle).  Case was wearing the GPS and at the end of the ride, it showed a max speed of 40 mph and he came in 2nd place to Ginger.

Riding Ginger is like driving a sports car.  You know the speed is there; just need to press down and go!  What’s that song?  Zero to sixty in five point two!  That’s Ginger.  Butter is more like a Gremlin.  A little wide, bucks a little bit when you give her gas, but hugs the road once you get moving.  Blue is a truck.  A little bumpy, but lock him in four wheel drive and he’ll get the job done.  Baby.  Two words:  Mack Truck.  And my Windy?  She’s just a Honda Accord, 2-door, 5-speed.  You have to learn how to gently let up on the clutch, but once you get the hang of her, it’s like driving an automatic.  Set her on cruise and go.


The swelling is down now on Windy’s leg and I planned to take her camping this coming weekend.  But once again, it looks like the weather may not be in our favor.  It’s predicted to hit almost triple digits.  Welcome to July in Nebraska.
- July 12, 2011