On the Road (Sans Trailer) 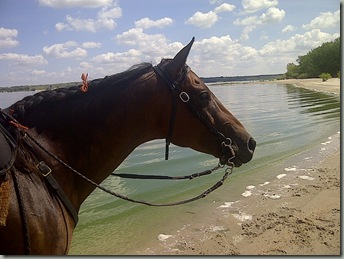 With the trailer project done and a slight break in the heat, I planned to join the Platte River Riders Central group for a ride near Calamus Lake.  Took the time off work and everything!

The day came and the weather was decent.  Loaded up Windy and hit the road.  As I was coasting down the hill from our house, I was logging in the destination on the GPS.  When I got to the corner by the highway, I went to accelerate and found my truck had died.  Hmmm.  It never dies.  It has had a lot of days when it wouldn’t start in the past few years, but to just die?

I tried to start it.  It just grinded.  Crap.  (The R-rated version in real life).  I popped the hood to see if there was anything obvious; like I would know the obvious if I saw it!  The neighbor pulled up next to me and looked, too.  We found nothing obvious.  He went to get his tractor to pull me off the road and I called my friend, Robyn – who was also going on this ride – and asked if she could swing by and get me.  And, could I sleep with her, too? 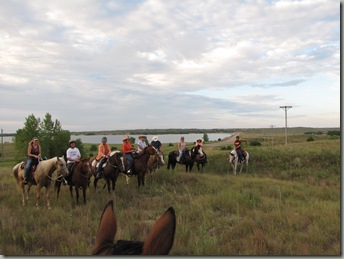 We got to Burwell about a 1/2 hour later than planned, our central friends were already there.  We set up camp at the Burwell Rodeo grounds.  After a late lunch, we headed out to the home of one of our Cowgirl Weekend friends to join the Platte River Riders. 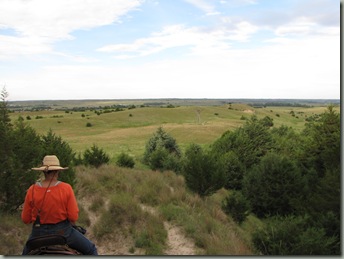 There were eleven riders that evening for a humidity free, bug free, stress free ride.  We rode on private property back behind the lake.  Where our land on the eastern side of the state consists of more cropland, the central folks have much more pasture land and riding opportunities on their own properties. 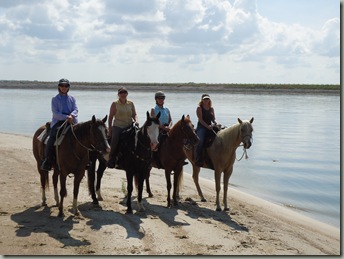 The next day, we trailered over to the wildlife area of Calamus Lake.  According to Nebraska Game and Parks, horses are allowed in wildlife areas, unless posted otherwise.  We entered the area just below the dam.  I realized after we unloaded that I had forgotten my camera back at camp and just had my Blackberry with me.  Joni had her camera so most of these photos are hers. 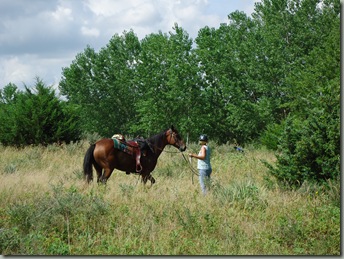 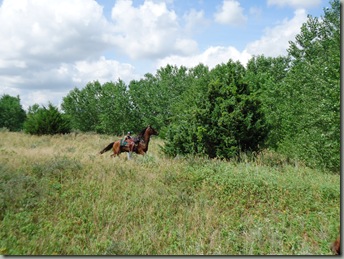 As we worked our way over to the beach area, I glanced down to what I thought was a downed electric fence.  On closer look, it was a string.  Knowing my horse couldn’t tell the difference, I dismounted to roll it up.  Come to find out, it was attached to a kite! 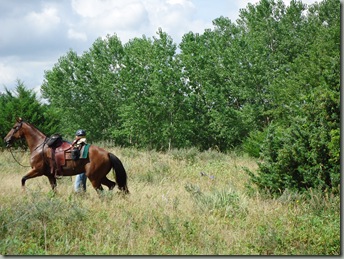 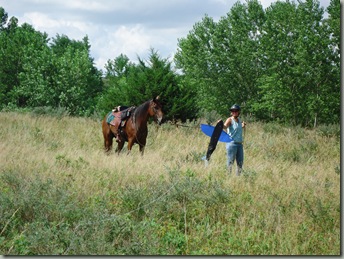 I am not sure a kite has ever been an obstacle at a competitive trail ride, but try pulling in a kite with one hand and keeping your horse still with your other hand.  All the horse sees is something big and blue with wings bouncing in and out of the weeds!  Eventually, as it got closer, Windy started to relax and eventually touched it with her nose.  I wouldn’t go as far as putting it behind me on the saddle. We made our way over to the beautiful beach, much different than the lakes in our area.  The sand hills in this part of the state really do make for white beaches; the water almost blue green against the sky.  I had forgotten my camera back at the camp so only had my Blackberry for pictures.  Luckily, my friend, Joni, had her camera with her and caught some great shots. 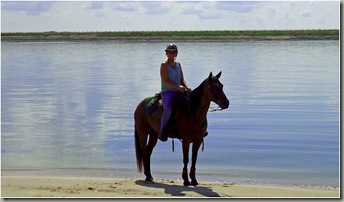 By noon, it was getting pretty hot, so we finished up our ride and headed back to the rodeo grounds.  We put the horses out while we went to lunch (seems to be a food theme going here) and then came back and broke camp.

It was a short trip, but much needed.  Not only for my mental health but to ensure Windy’s soundness.  You may recall she had some swelling after a ride in July and I was pleased to find there was no recurrence.
- August 05, 2011