I went out tonight with a sweatshirt and came back for another layer.  It was quite chilly tonight.  Almost put my ear band on.  Picked the wrong time of year to get my hair cut shorter.  They are expecting frost in some of the low-lying areas. Although I am loving this fall weather, I am not looking forward to what follows.  I won’t think about that now and just enjoy today. 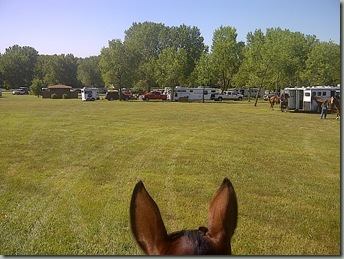 As I mentioned in a previous post, this past weekend was our 2nd Annual Trail Challenge.  We had about fifty riders come out and compete in this fun event.  Based loosely on some of the national competitions, we design a trail ride with judged obstacles along the way.  The riders are scored on their horsemanship and the horse is judged on how well it performs the challenge.  Beginner friendly and has proved successful both years we have hosted the event.

A lot of prep work goes into the ride from clearing trails, setting up obstacles and strategically placing “I Spy” items that riders are to spot along the way.  We were quite satisfied with our challenges and hoped they would appeal to all audiences. 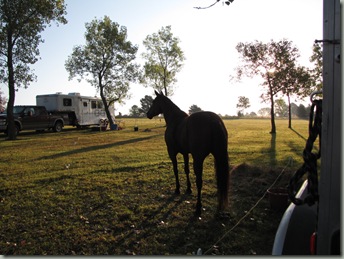 The morning of the challenge, co-chair Shari and I, went out to pre-ride the trail and make sure none of our markings were disturbed overnight.  Other volunteers placed the larger obstacles at the appropriate locations.  Windy was very nerved up when I saddled her that morning; there were field trials going on a mile or so away and she could hear the activity but not see it.  I rode her through her nervousness but she was no where the rock she had been during the set-up. 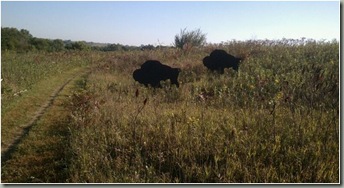 We'd been out on the trail a good hour when we came upon one of the obstacles;  two cut-out buffalo, which had just been placed by volunteers.  As designed, the rider would come out of the forest and around the corner and see these 4’ x 6’ beasts along the trail.  They would be asked to halt their horse on the trail, straddling a small stick or branch, count to 10 and move on.  But here Shari and I are on our fine trail horses – both CTR horses – and they are totally unglued by what they see on the trail.

I slowly urge Windy onto the trail toward the buffalo. I let her look at them but kept her feet moving.  She veered off the trail and made a wide half circle around them.  Once we were passed, I let her stop and turn toward them.  She watched them and seemed to relax.

Shari’s horse, Wiley, on the other hand, grew to be about 17hh and literally inflated in front of my eyes.  You would swear his ears even got taller!  Using what appeared to be a similar tactic, Shari asked Wiley to move on.  He moved, but very slowly and was very concerned.  At one point, he spun around and attempted to bolt.  Windy took that as her cue to bolt, too.  Shari and I pulled both of our horses in and she started again.  Wiley finally advanced to where Windy stood and we continued down the trail.

We were SHOCKED that our good trail horses reacted like this to inanimate objects.  And if OUR horses had this kind of problem, what would the 50 other horses do?  We MUST change the obstacle.  We’ll make it a walk-by – between two cones – instead of a stop.  Yeah, that will help the riders immensely.  We went back and told our judges we were making that change or “someone will get hurt.”

Once the ride started, Shari and I rode from point to point to make sure it was running smoothly.  When we came over the hill to where the buffalo roamed, we stopped to watch the next set of riders as they approached.  We kept a tight rein on our horses as we were sure when the riders' horses bolted, so would ours.  Imagine our surprise when horse after horse rode calmly through the “herd” of buffalo.  One.After.Another.  According to the judges, about 95% of the riders had no issues with the buffalo at all! One rider even asked the judge, "Is this all we have to do?"

Was our face red. 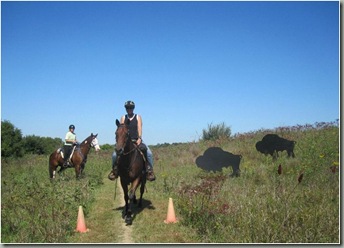 We did make our beasts go back through the challenge and try it again.  Although not entirely happy, they did make a better showing than they did earlier that day.