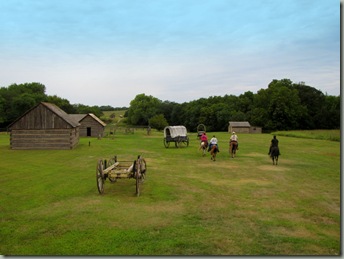 What a crazy week or so.  I can’t remember where I left off and what I did prior to last Friday, but in short,


Any other time, I would have pulled the plug on the camping trip because it was just so chaotic time wise.  Not only did we get a late start, I had plans for Sunday night so needed to get home at a decent time that afternoon.  As it turned out, some of our alfalfa must still have damp when baled and we probably lost at least a quarter of it.   Luckily we still had plenty of hay in the barn and hopefully will get a 4th cutting if we don’t get in early freeze.  The urgency for going to Rock Creek was the opportunity to ride on some private property near the park and who knows when and if we would have the chance to ride there again. 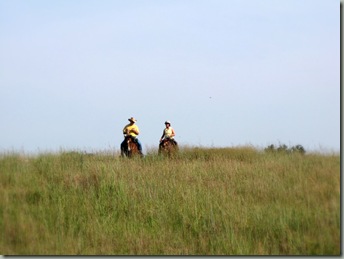 Steele City Canyon is located a few miles from Rock Creek Station.  In the past, together with land from Rock Creek Station and Rock Glen Wildlife Area, it has been used for competitive trail riding.  I heard our host mention endurance rides, too.  I don't think they have hosted many of those rides here in the last decade, if at all.  It is all private property and different owners, so we were excited for the privilege to ride there. 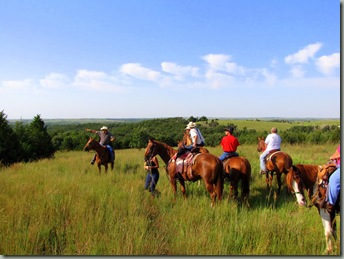 It was amazing how the terrain changed in just a few miles.  We were riding through fields and then saw a vast amount of trees lining the hills out yonder.  As if staged, a train roared down the tracks in the distance. 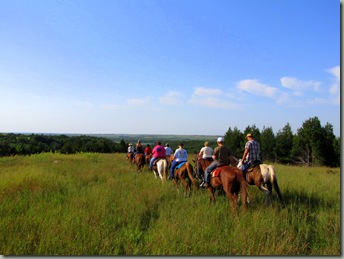 There were fourteen of us in our group, all friends who ride together frequently and all experienced riders.  Some of the trails were a little rough, but I am sure to the relief of our host, nothing this group couldn’t handle.  But it probably was not well suited for a novice rider.  There were some challenging climbs. 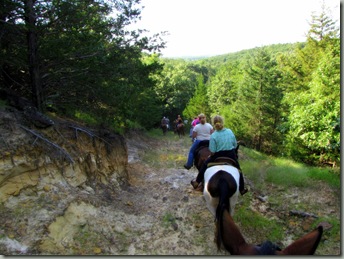 Some of the area got quite rocky.  Our horses aren’t shod right now but they seemed to pick their way along the trails just fine.  Can you imagine this view in the fall? 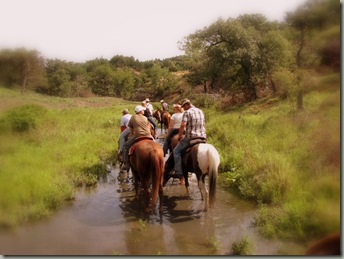 A stream ran thru the bottom of this canyon.  Most of the horses stopped for water.  Although it wasn’t extremely hot, we were starting to feel the humidity and lost the breeze once we dropped down here. 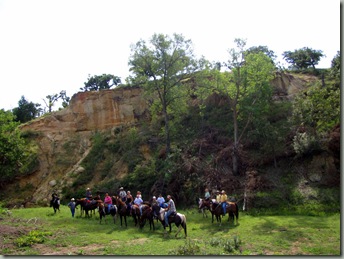 I tried to get a group shot.  What the heck?  The horses are facing another direction!  Bad photography on my part.  But it does give you a good idea of the rock canyon.  The creek runs right in front of it. 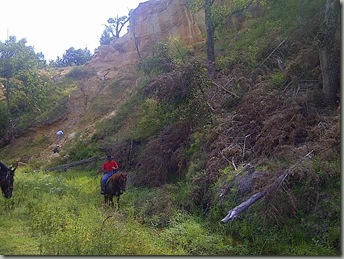 In the background, you can see one of the kids starting to climb the canyon wall and yes, he made it to the top. 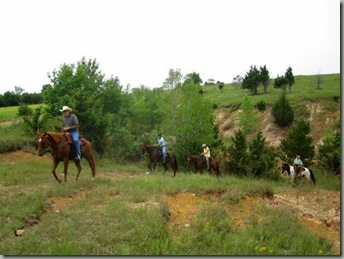 We rode about five hours and I felt it the next day!  It just goes to show how little I have ridden this season compared to most.  I don’t remember the last time I was sore after riding.  I imagine Windy felt a little bit the same way. 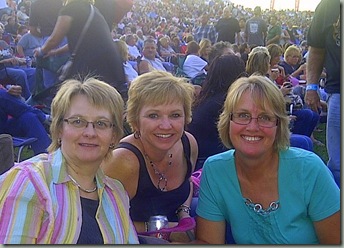 We tore down camp shortly after we got back and drove home the 100 miles less than 24 hours after we had arrived.  My sister and our childhood friend, Diane, picked me up not long after we got home and we headed to the Meatloaf concert in Omaha.  Meatloaf was one concert I missed in my youth.  I still know all the words to his songs.  It was worth trying to fit it all in this one weekend.
- September 01, 2011