My friend, Kathy Newberg, together with her friend, the late Joyce Vossler, started Cowgirl Weekend thirteen years ago as a way to make horsewomen more independent from learning to hook up and pull your own rig to exploring new trails.  I was invited to join the group nine years ago.  As it has evolved, it has become less of a learning weekend – because we are all that now – and more of a fellowship of friendship.

This year, Kathy planned the weekend in the Flint Hills of Kansas.  Following the “pre-CGW” trip I most recently blogged about, we pulled into the campground near Tuttle Creek Lake early Thursday afternoon.  A few of those invited were already here and before long, the campground was full with the twenty women attending this year’s event.  After we tended to our horses, social hour began.  It’s the first time many of us have seen each other collectively since last year. 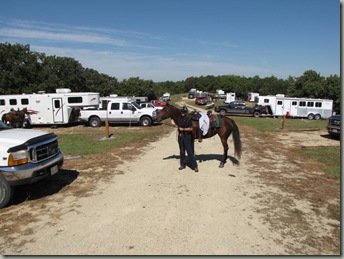 The riding is the most important part of Cowgirl Weekend and Kathy tries to find places that we may not have been before or that are unique and perhaps someplace we wouldn’t have traveled to outside of this event.  Other than a few of the competitive trail riders, none of our group has been here before.  So when we set out on the trails Friday morning, it was definitely a ride of exploration. 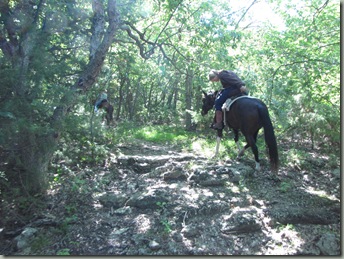 The trails wound through the woods with drastic changes of elevation.  Every now and then we would pop out of the trees for views of the lake or the trees on the next bluff just starting to show hints of fall.  The trails are very rocky with a lot of switchbacks; makes for some challenging terrain for our otherwise flatland horses.  Trust in the horse under you and you’ll find these trails breathtaking and beautiful.  I loved to feel Windy tuck her hind end under her as she descended the hills or turn beautifully on the forehand to negotiate the sometimes sharp switchbacks. 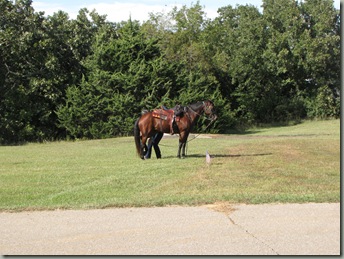 Later yesterday we had our own version of the Craig Cameron (perhaps less) Extreme Competition.  It was a great exercise for Windy and me and one I have to admit, we didn’t do to well at.  She avoided the cavelettis, would not cross the tarp and veered off when loping a circle hoping to return to the herd of waiting horses.  I was very disappointed she would not pass through a curtain of trail tape after just marking five miles of trail from the saddle a couple weeks ago.  She did however sidepassed beautifully to the mailbox, make a nice circle with a long stick positioned on a barrel and stand quietly while I dismounted and lifted her back leg to clean her hoof which was the final task.  I was very impressed with many of the other riders and it was a tough competition!

At CGW 2004, we had our meals catered.  It was the start of a wonderful tradition.  Although catered is our first option, if we are at a place where we don’t have that luxury, we come up with other food ideas.  This year, we are having a series of potluck.  Thursday night was all appetizers, last night half the group furnished traditional potluck and the last night the other half will serve  international potluck.  No dry sandwiches around here; we eat very well.

Off and on, I think about Ginger.  I brought her to Cowgirl Weekend twice and she was going to make the trip with Windy and me this time.  I am not looking forward to pulling in the driveway and seeing her gone.  It will take a long time for me to get used to her absence, even longer for the hurt to go away.  This week and CGW has been a good diversion from the pain and the time with my friends and my good mare, priceless.
- September 24, 2011