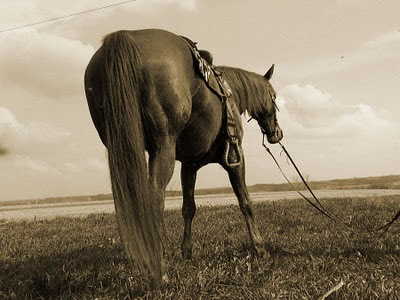 Earlier last week, a fellow horse friend’s son underwent brain surgery for an abscess.  This young man had been hospitalized off and on over the last several weeks and it wasn’t until recently that they could identify what was causing his illness.  A risky surgery, we were all glued to Facebook that day waiting for updates.  And when we received the good news of his successful surgery, there was a collective sigh of relief which went through our online equine community.  While prayers are still being offered for his strength and that of his family during this recovery, we are happy to know he is home with his family again.

The loss of a loved one is something most of us fear.  As a parent, it is particularly hard when we know someone’s child is suffering because we easily relate to the pain the parent must be feeling which is beyond what any of us want to face.  Someone posted that having a child go through this ordeal kind of puts the loss of a horse “into perspective.”

Zing.  No doubt geared toward the recent notes of sympathy that I received on the same list serv following the loss of Ginger.  And I couldn’t agree more.  Our priorities in life should focus on the people we love.  It doesn’t, however, make the loss of our pets any less real.  How do you define loss?

I have to admit that although Ginger was technically John’s horse, I felt the loss as if she were my own.  She was our first horse; the one I feared and the one who helped me overcome that fear.  She was the one I would loan to friends to ride; she was my spare.  As the mother to Windy, I recognized her traits in my own horse.  I told the girls I am camping with this week that I have not taken the loss of an animal this hard since I lost Macy, our springer spaniel, in 1998.  The support from my friends though this ordeal has been incredible and comforting.

Over the last few days as I have been working to come to grips with my grief, I worry about John.  He suffered a loss, too.  How he must feel to not have his horse out in the pasture anymore.  Has he thought about upcoming rides and his plans?  Does he look at Blue or Butter and know that even though they are there to ride, they aren’t “his horse”?  We haven’t talked about the loss of his dad in 2004, how can he articulate how he feels about the loss of something which has been recently pointed out as less consequential?  Is it any wonder that it is uncomfortable for people to share their feelings about a loss of a pet when others call you out for not putting it “in perspective”.

This blog was created to share my horse life and unfortunately, it now includes the loss of one of our best horses.  And “best” has nothing to do about how well she was trained or a pedigree; it is about how much we loved her.  It is not to make it any less than or greater than it was.  There is still human sickness, death and war going on and the death of my horse was really a blip on no one’s radar but our own and those who loved her.  I understand this, but it doesn't make the loss any easier to take.  And it does kind of piss me off when people tell me how I should or shouldn't be feeling.
- September 21, 2011