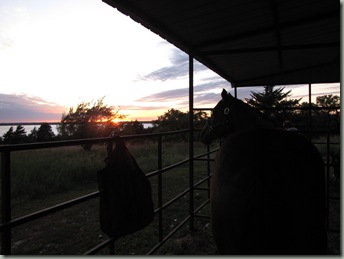 It was a little over an hours drive from Eisenhower Park to Milford Lake near Junction City, KS.  It sprinkled intermittently along the way, so it was a good travel day although annoying from a windshield wiper perspective.  By the time we reached Milford Lake, the rain had stopped, but it was still quite windy and chilly.  We had planned to give the horses the rest of the day off, so after securing them in one of the nice covered stalls provided by the park, we busied ourselves with setting up camp.  It was the first night of the trip that I used the heat strip in my trailer; quite chilly! 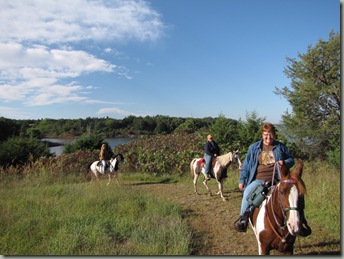 We have been blessed with beautiful riding weather and the following morning was no exception.  Definitely sweatshirt weather, but the sun was shining and once again, it was pretty much a bug free day.  The trails around Milford Lake are mowed paths with occasional views of the water.  If I were to compare it to trails at home, very much like those on the south side of Branched Oak Lake.  Not challenging, but for Day 4 of our trip, a nice easy ride for the horses and for once, no rock. 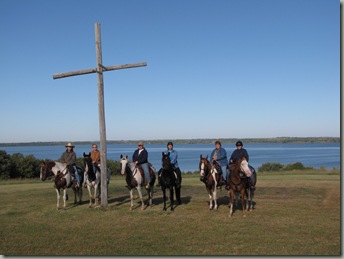 There was a river trail that looked inviting.  It went along the spillway from the dam.  We didn’t find it until three hours into our ride and didn’t have enough time to explore.  We’ll check it out next time we are in the area.

Later that day, we met up with the rest of our group to begin our annual Cowgirl Weekend in the Flint Hills of Kansas.  We’ll ride out mid-morning.  The sun has just come up and it looks like it will be another nice day.