Day 1.  I wonder how my family is going to function with me gone for a week?  I swear my cell phone didn’t stop ringing until their first period bell rang.  And finally, I could drive in peace. 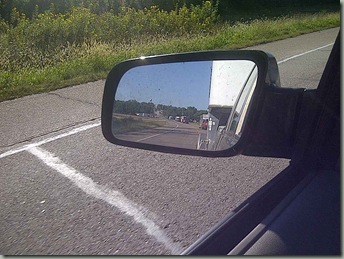 I met Mary and Sharron first and a half hour later, Kathy joined our convoy.  Another 40 minutes or so and Kelly, the fifth person in our caravan tucked in behind us.  For the most part, we stayed together.  I led the pack with occasional cars and trucks getting in between us.  It was pretty cool to look in my rearview mirror and see the trailers behind me.  We reached our first destination about noon.  We set up camp and had lunch while I horses relaxed and then headed out on the trail.

I was surprised to find the trails a little rockier than I had envisioned.  Windy is shod on the fronts but has very thin hoof walls on her rear and we have struggled with shoes in the past.  My current farrier will not put them on and I agree with his decision.  I have a pair of boots that work in a pinch.  They seemed to work okay until we got into some muddy areas.  I finally gave up and tied them to my saddle.  They won’t do much good there, but we seemed to get out of the worst of the rock and would work to avoid it the rest of the afternoon. 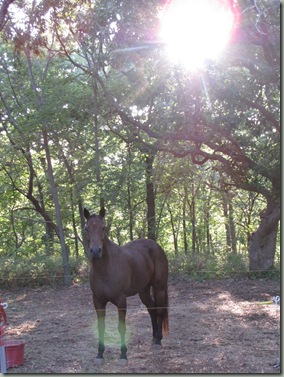 It was a nice quiet day to catch up with friends.  We talked about Ginger, shed a few tears and then moved on.  I know with this group that anytime I want to share, I can.

The only excitement today was Windy bolting.  We were second to the last on the trail and all of a sudden she shot off like a bullet; very unlike her.  I tried to pull her in with one rein and the same leg to her side when I realized THAT leg was tangled in a branch and every time I moved my leg, I pushed it further under her belly and back legs.  Zuni and Kathy heard me coming and cleared the trail.  I looked ahead at Mary and her horse, Sara, and knew Mary would take the impact if I needed her to but before we collided, I had freed my boot (spur?) of the branch and Windy stopped.  She was a bit shook up but nothing a short breather and a couple of treats wouldn’t fix.  She so rarely spooks so I’ll give her this one. 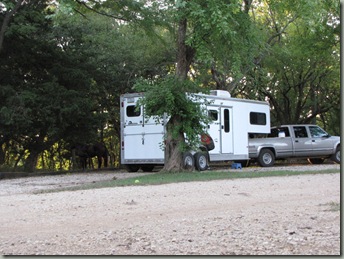 Having just finished our Trail Challenge last week and taking great care to leave the trails as we found them by removing all ribbons and other items used in competition, I am very surprised to find this trail has been left full of trail ribbon and paper plates from some sort of prior ride, based on the condition of what seems to be garbage now.  Some paper plates refer to "25 mile this way" so I wonder if it is some sort of endurance type ride.  I know there is a CTR planned here in a few weeks but I would think trail marking for that ride would be premature.

Tomorrow morning we will hit the trails again and then load up and head to our next destination, just 55 miles away.