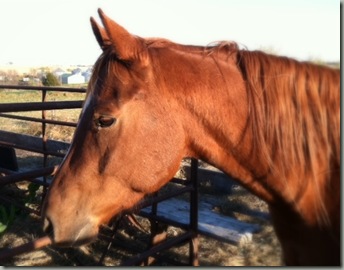 “Here’s your one chance, Fancy, don’t let me down.”

Although Lucy was a close second and Maggie May was my personal favorite, John has decided we can try the name “Fancy” on our new mare and see if it sticks.   Of course we usually end up with barn names for our barn names….

Blue’s registered name is Reggie Blue.  He came to us as Dewey and that just didn’t roll off our tongue, so we called him Blue.  But though the course of his life with us, he’s been nicknamed Edgy Reggie and Blue Boy.  Baby isn’t registered and when we got her, I named her Duch.   But she has always been our Baby.  When we got Ginger, her name was Katie.  I always wanted a horse named Ginger, so we changed it.  She had also been known as Red, Little Red and Redneck.

Butter came to us as Butterscotch.  We shortened it to Butter.  But depending on her mood, she is Butter-Butt, Butter-Ball, Butter-Nut, Butter-Rum……

I think I told you Windy was named as such because she was born on an incredibly windy day.  When we sold her as a yearling, her new owner named her some Indian name like Commanche or something like that…  Then the next owner called her Misty.  When she came back to us, so did her name:  Windy.  But her nickname is Poo or Poo-Bear.

So who knows what the Fancy mare will end up being called in a long run, but for now, Fancy it is.  And due to chilly temps and biting wind,  the above picture is the best that I could do today.  There will be better days for better pictures.