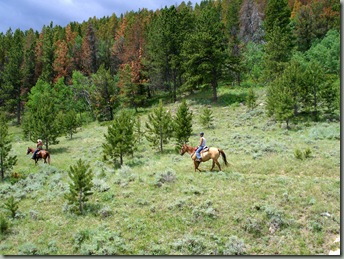 Butter has been on an extended vacation but that’s about to end.  It’s time she steps up to the plate and she has some big horse shoes to fill.  I guess for now, she’ll be John’s main ride.  And my back-up horse.  And the guest horse extraordinaire.  She’s kind of a cranky thing; I’m not sure she is going to like these extra duties. 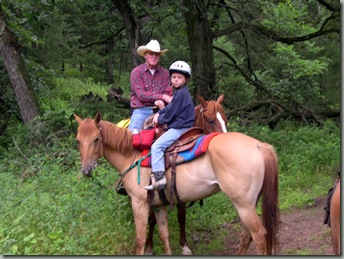 Case first rode Butter in 2004, then owned by a friend of ours.  At that time, she was just three years old - and certainly not an age for a young child - but had a nice start and was a good size for our then seven-year old boy who had been riding for almost three years.  The next year we had an opportunity to buy her and we did. 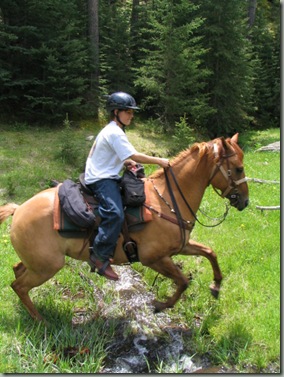 The boy and the horse grew up together.  While good parents would most often find an older horse for a child, Case and Butter did okay together.  Oh, she got away with things she shouldn’t have and as a team they probably were a little too wild, but the boy is now almost 15 and Butter is 11, and they have had a lot of fun and survived so far.


Butter isn’t a tall horse; she stands just at 14.2hh.  But she is stocky built and although short, I have never felt “too big” on her.  As Case passed me in height, I kidded him about being too tall to ride Butter, his long legs hanging well past her stomach.  He hasn’t rode much this year and she has grown more buddy and barn sour.  The last time we had Butter and Ginger out, I opted to ride Ginger and let John deal with Butter-butt. 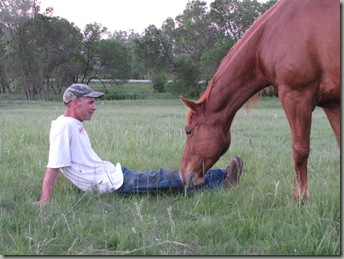 I don’t know what John will do about getting another horse.  If it were me who lost Windy, I would probably finish the season on one of our other horses but would definitely look for my own horse.  But riding isn’t as important to him as it is me.  He definitely had a bond with Ginger.  He loved her spirit and I am pretty sure he feels he can’t replace that with another horse.  It would bore the hell out of him to go look at some well broke horse that lacks the fire he felt with Ginger.  His idea of horse shopping would probably be the loose stock they run through at the end of a sale.    And that’s okay, too, if that is what he wants. 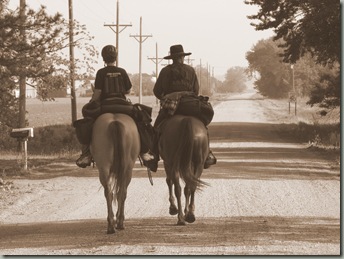 For now, if the weather holds, we have one more camping trip planned next month.  I asked if he planned to take Blue or Butter and he said Butter.  So I will start putting a little time on her so she is in some sort of shape for the trip.  Her days of leisure are over.