A Horse With No Name

I really wanted my first post about “the mare” to include some pictures that shows her really pretty face.  She has such a cute head; very soft eye (except when she unloads in a strange place at dark) and seems very kind.  I’ll toss in some cell phone pictures as the story unwinds and get you some good ones later this week. 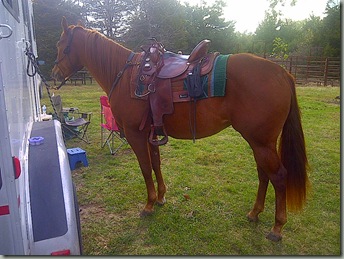 As you might imagine, in my spare time I have been searching Equine.com, Dreamhorse.com, Craig’s List and all the other sites I could find looking for that horse that fits my description in the prior post.  I would filter it to those specifications and find very little in the area I know John would travel to look;  going over 100 miles to look at a horse is just plain crazy, in his book.    So I’d expand the search to include bays, livers or blacks or maybe geldings but nothing tripped my trigger. 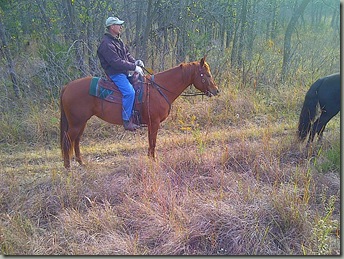 This mare was found buried in a text ad.  She fit some of my criteria but there were no pictures posted.  I can veto a horse on pictures alone and will.  So I requested photos.  In the meantime, we looked at some mares the neighbor had for sale; nice enough, but just wasn’t “the one”.  I’d gotten a few responses to my ad, but none of them really grabbed me.   Although John said he wanted a horse Ginger’s size (14.3hh), I really wanted something over 15hh. 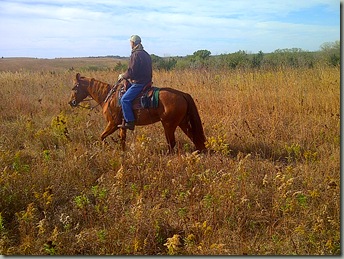 I put the above picture on Facebook & McCain commented that he thought this was an old picture of Dad on Ginger.
The ad for this mare said 16hh which John did not want, and I’ve found many (most?) are represented as being a bit bigger than they really are – not on purpose – I think we just estimate sometimes and it happens.  So I was gambling this mare wasn’t a true 16hh.  A few days later the pictures arrived.  Wow.  The pictures matched the description.  She may be the one. 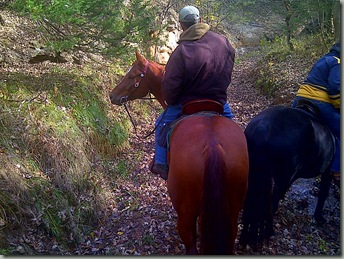 Okay, this is getting too long…. just get to the story.  She was started by the trainer who started my friend, Joni’s, show horses and who put 45 days on Windy.  And Joni knew the girl who rode her in 4H.  After 4H, she went to a trainer who I think trained Blue before I owned him.  Anyway, small world for just pulling an ad off the internet. 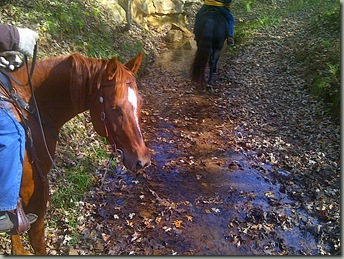 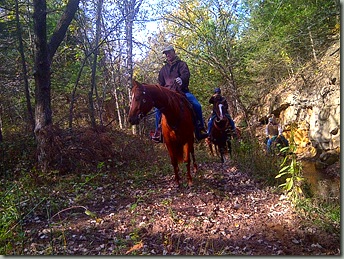 We tried, we liked, and we bought.  The loaded her up with Windy, who had made the road trip with us, and headed out to one of our favorite horse camps and trails not far from where the horse was located.  May as well break her in quickly. 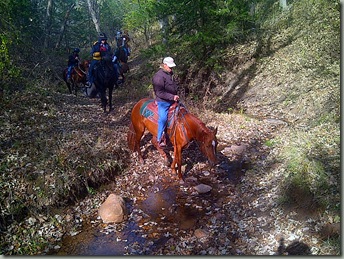 We put her in a corral at the campground next to Windy, fed and watered them and turned in for the night.  This morning, we saddled her and rode out with a half dozen or so friends.  For not being on the trails before, this mare did awesome.  She looked, but didn’t spook.  She crossed water and learned how to carry a rider down a hill.  Not that these trails were difficult, but for a young mare, her willingness was incredible. 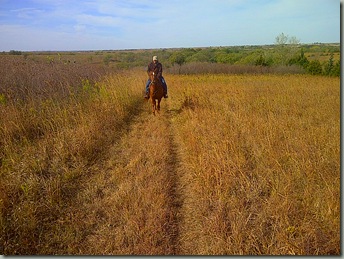 What isn’t so great is her name.  She is registered as Bartending For Money.  So I was hoping she would have a nice, cute barn name.  Nope.  They called her Bar Maid.  Bar Maid??  How could such a pretty horse have such an awful name!  Technically, since she is John’s horse, he should choose the name – but if he did, her name would be Sue or Tits.  (Don’t ask.)  So I will provide a list of names and he can have final say.  I think.  Out of all the ones I have suggested, so far only “Becky” has made the list.  And he wasn’t real keen on that.

On the top side, she is by Lose Money by Two Eyed Red Buck and out of Moneys Best Dream.  On the bottom, she is out of Bartender Button out of Miss Acey Button by Silver Bartender.  If you are familiar with Pitzer breeding, her papers pretty much include the who’s who of their stallions:  Two Eyed Bartender, Two Eyed Jack, Watch Jo Jack, Mr. Baron Red and Two Eyed Patti. 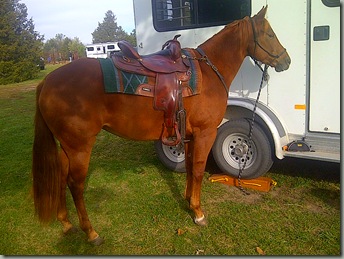 So, what would you name this pretty red mare?