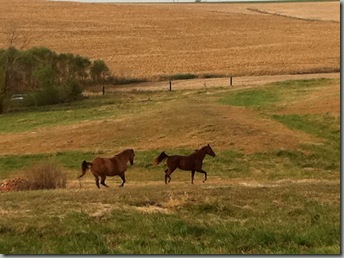 We have had a spectacular fall with sunny days and mild temperatures.  I keep thinking this will be the last one and then we are dealt one more.  This weekend is suppose to be in the sixties and we will be taking advantage of what could be the end of the riding season.

Fancy is bunking with Butter and Butter is not pleased.  But she seems to be the most benign solution right now.  Fancy has a few bite marks but nothing serious.  I let them out to pasture together last weekend and let them run it off until they called a truce. 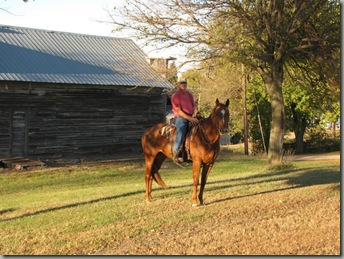 John and I took our mares out riding the Rescue Road last weekend.  Rescue was a small railroad town; abandoned after the tracks were pulled up.  The railroad bed is now a minimum maintenance dirt road, lined with trees and not much, if any, traffic. If we ride from the lake, it’s nine miles round trip, but we parked a mile up the road so only got 7 miles out of the ride.  Fancy did spectacular and encountering combines, tractors, shredders, cows and ATVs were non-issues for her. 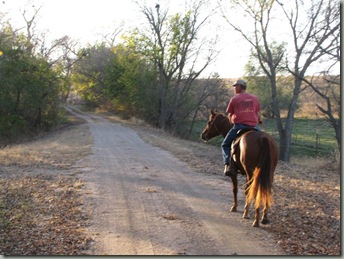 Windy was real good about leading, but I would drop back and see if Fancy would take the lead.  And she did.  She wasn’t too worried about being first or last.  She was very interested in looking at everything around her, but not spooky at all. 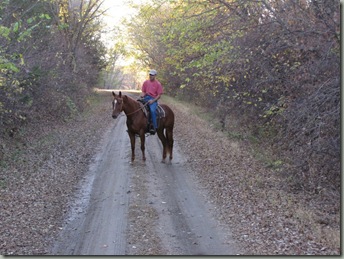 We took her to the farrier this week and it was probably the first time she didn’t behave perfectly.  Her previous owner said she had only had shoes on as a two year old, so she was a little fussy, but not bad.  Considering she has already been camping, trail riding,  moved to a new home, beaten up by a little round mare, blood drawn from vet for health papers and now had nails driven into her hooves,  I think she is due a little fit. 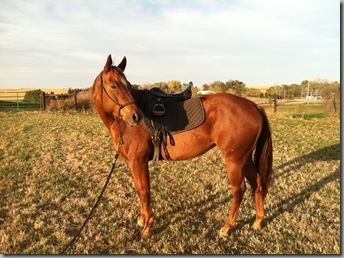 Oh, and if that wasn’t enough, we had a little English lesson, too.  You guessed it, a non-event.  A friend asked me if this mare is going to be too quiet for John.  I don’t know?  Definitely different than Ginger.  How much of Ginger’s fire was nature and how much was nurture?  John loved to hot rod on Ginger and she complied.  But it was hard for Ginger to come down and many of his rides were a challenge.  I don’t think Fancy has that much spirit and I can’t help but think John might appreciate a mellower ride; learning the buttons of this new mare.  He can pull out Butter when he has a need for speed.