If Not Drugs, A Tumor? 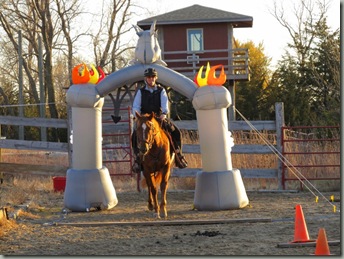 I know I have mentioned our past horse purchases.  First there was “kid-broke (three-year-old) Ginger.  And once, after purchasing a pretty paint mare at a sale, my non-horse sister-in-law called me the next day to ask if I bought a horse.  I thought it odd she call, but she went on to explain that a co-worker of hers saw me bidding and knew the horse.  It broke it’s last owners back.  That mare didn’t stay with us long.  There was the pretty black mare that broke three of John’s ribs and the pretty black gelding that was most likely navicular.   And there were others.  So by the time I bought Windy back, although she had been ridden, I was hoping she wasn’t too old to bring back from the dark side should she have one.  (The jury is still out.)

When we found ourselves horse shopping after Ginger died, although I was quite anxious to get another horse, I also knew we had time to look.  I wanted to start out looking for our ideal.  We saw a few before I stumbled across Fancy’s ad, but none had really tripped our trigger.  I consulted with a friend, a very respected horse breeder, about Fancy.  She liked her looks and breeding and pointed out that we shouldn’t disregard what training she has had.  Although I was somewhat bargain shopping, my friend pointed out that I needed to look at the horse and the training and together, it sounded like a great deal. 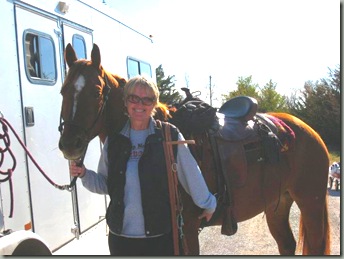 You know the rest; the first trip to Rock Creek to last weekend at Kanopolis; Fancy just takes it all in stride.  We joked initially that the drugs hadn’t worn off yet, but now long past, I tend to wonder if she has a brain tumor.  We just don’t luck out with horses of this nature.

This past weekend, there was a “Haunted Trail Rider Challenge” being held about an hour away.  A few of the Horsetalers decided to go and because I knew I’d be in good company, I decided to take Fancy.  Why not?  She has been unshakeable so far and I haven’t really had a chance to ride her outside the arena.  We didn’t have to do anything really; just soak it all in and give her more exposure.  I did invite John to come along but told him I was riding his mare. He had other plans so wasn’t interested in going.  Good thing, because he would have had to take Butter.  I don’t like him riding Windy and I sure didn’t want him competing with me on MY horse.  (Ignore the double standard, please.) 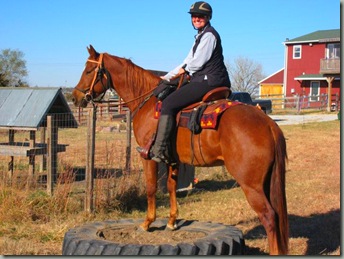 Well, we came, we went and we didn’t come home a winner as far as points are concerned, but her performance was a major success in my book.  With just a cluck, she attempted most things I asked – most without hesitation or concern.  Truly, her only angst was over hoola hoops and even that was a delayed reaction.  The following pictures were taken both during warm up and competition. 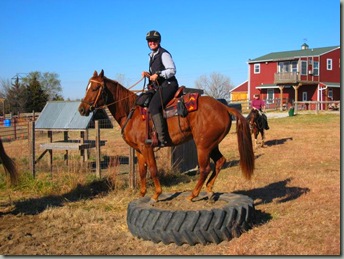 We started by playing with some of the obstacles that weren’t part of competition.  I was surprised at how easy it was to ask her to approach a challenge and see her look and act.  Don’t you just wonder what is going through her head (beside the tumor?) 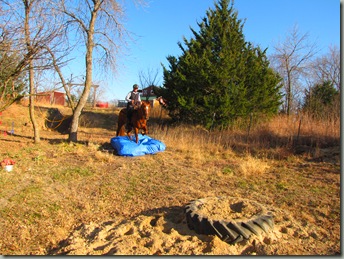 She stepped right over this tarp covered mattress.  I had my druthers: I think of all the things that can go wrong like getting one of her shoes stuck in the tarp.  There was another tarp over the ground that was covered with garden hose & once again, she stepped on it and crossed.  The tires in the foreground of this picture were “steps” which we went up and down. 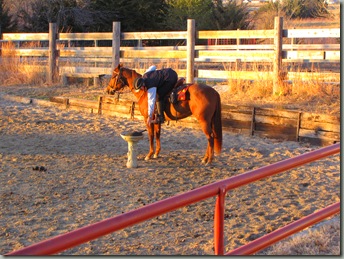 During competition, we were asked to stop at this plastic birdbath and pick up a stuffed lollipop and then trot a circle 8.  I was really impressed with how she set herself up when I asked for a stop and stood quietly while I reached for the item. 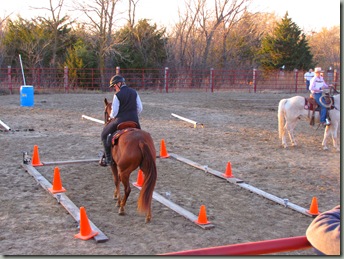 We were asked to back through the U-shaped timber.  We started on the right side and I attempted to turn her on the forehand to get over to the other side.  She had a little problem lining up, but it was really just communication – her learning what I’m asking or me learning how to ask her correctly 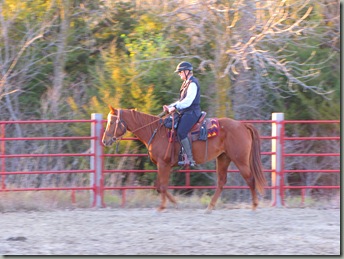 I just liked this picture.  She had a nice headset.   My posture could have been better; I look like I have a touch of scoliosis. 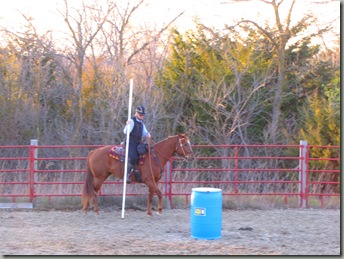 This was an interesting obstacle.  The PVC pole was left next to the fence and I was to fetch it and place the end on the barrel and then circle it.  I couldn’t get her sidled up to pole enough for me to reach it, so I asked the judge to put it in my hand.  Fancy wasn’t too startled by it, but she would attempt to walk away from it when I would lift it toward the barrel, so we just called it good by holding it. 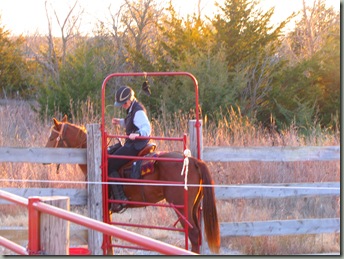 The challenge started by going in the gate which we did, but it wasn’t pretty.  And lastly, we had to go out the gate; and we nailed it.

The most important thing I learned is our mare is very willing.  (Note, I say “our” mare.)  There were some things she didn’t do, but not so much because of fear or stubbornness but more from confusion; not understanding what I was asking.  And that is reasonable.  She was trained by someone else and we have to learn to sync up with what she has been taught.  All that will take time.  Don’t tell Windy, but I am pretty sure she would have placed higher than my pretty bay mare.  Although Windy is a little more refined to my ask, she has no use for silly pet tricks.  I am not sure I would have gotten her to go under the inflatable, as shown at the top of this post.  Fancy passed through it like it wasn’t there.

My same wise friend pointed out that I shouldn’t compare the two mares but appreciate what each can teach me and what I can learn to apply to the other.  And I think that is good advice.  If there is no drugs in this mare’s system and she doesn’t have a brain tumor, I think we may have made one of our best horse purchases.

Did I mention that I had FUN?  I really, really did!