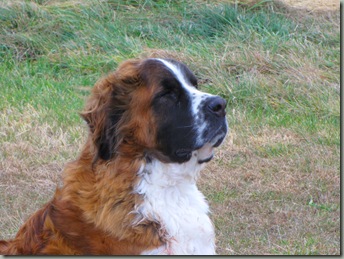 It is a crisp and chilly day here on the plains.  (Yes, sounds like my poor attempt at the first line of a bad novel!)  Just nineteen degrees.  John put the horses in the corral yesterday because he was working on the pasture fence, so the dogs and I went out to check if all is well and pleased to find no fresh bite marks on Fancy.  We have an automatic waterer, but I also like to keep a fresh tank filled in case one of the bossy mares would try to keep Fancy from it.  The fresh tank was empty and when I went to fill it, I realized I had forgotten to unfasten the hose from the faucet so a bit frozen this morning.  I unhooked it and pulled it out into the sunshine.  It shouldn’t take long to thaw.

Temps are expected to reach 50 again today (now I sound like the noon weatherman), but with strong winds which seems to be the norm lately.  I took the day off today in hopes of getting some outdoor time.  Tomorrow I am flying to Austin for the day and as luck would have it, it is predicted to be the last nice day for awhile.  The weekend looks wet and cold. 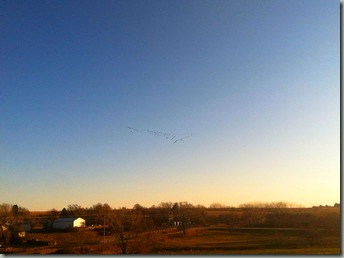 While I was outside, I heard the geese flying south, too, before I could actually see them.  We’ll see more of these flocks in days to come – we seem to be on the direct route. 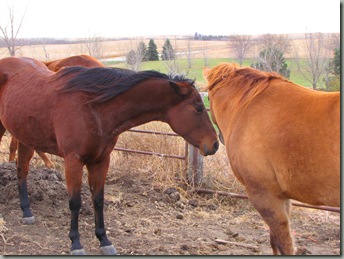 The other day when I put Fancy in with the herd, Butter had been down in the pasture by herself.  She saw some activity and came running up to the corral.  Windy was standing next to Fancy and approached Butter.  It almost looks like she is warning Butter to behave herself so they can all stay together. 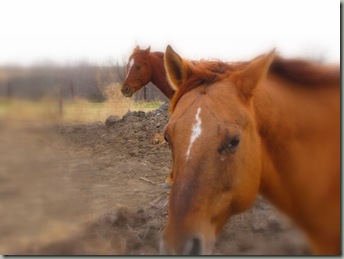 Yeah, Butter isn’t buying the plan for one minute, is she? 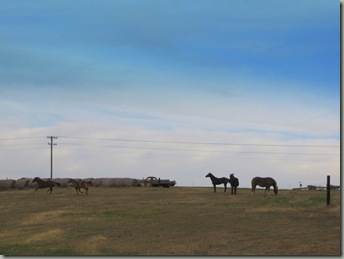 Later out in the pasture, for the most part, the horses ignored Fancy but every now and then, Butter had to give her a little run.  Once again, you can see Windy watching over like she is very disappointed in Butter.  I know, I am anthropomorphizing, but don’t all of us who have animals do a little bit of that?  Didn’t Dr. Doolittle make us all believers?