It’s been a week since I last blogged; seems life is going 100 mph and its hard to sit down and find the pieces to share on this blog.  Work is busy; its dark when I get home; certainly not much horse time. 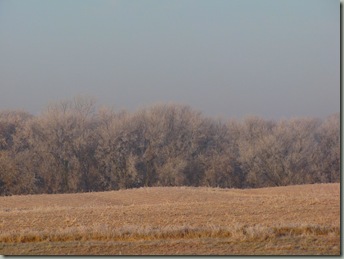 Last weekend, I took a class with The Camera Doctor from Kearney, Alan Mais.  Although I don’t use an SLR camera (yet), I do take a lot of pictures on what I learned is called a “bridge” camera.  My Canon SX10-IS has more functionality than a “pocket camera” but not up to snuff with the big guys.  I won’t bore you with my notes from class but I do hope to start taking better pictures as a result.  We just scratched the surface in our seven hour class and only yesterday morning did I get the opportunity to try out what I learned, albeit it was quick and dirty.  The sun was shining beautifully on the trees out yonder which were covered with a pretty layer of frost. 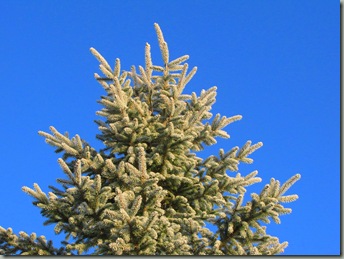 I am not ready to take the plunge to an SLR quite yet.  I think my Canon has hidden possibilities that I want to continue to discover.  And since I carry it in a saddle bag most of the time, I don’t think I would be as lackadaisical about a higher priced camera.  Since 80% of my photos are from the back of a horse, I wonder if a photography hobby might be separate from my riding hobby.  And do you know how much tack I could buy for the price of one of those lenses? 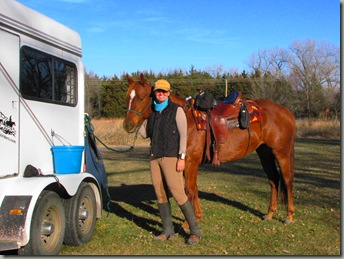 Yesterday we got a break from November as the temperatures soared into the sixties!  (That is what we Nebraskans say when it is extreme for the time of year – “the temps soared!”)  I had been watching the forecast up to ten days prior; had penciled myself out of the office in hopes it stayed true to what was being predicted and it turned out even better.  I planned to take Windy and meet my friend, Jules, at Bader Park.  She would be riding her new horse, so Windy would be the “good trail horse” setting a nice example.  When Mary decided to come, too, and usually rides her good mare, Sara, I decided to take Fancy instead.  I was surprised when Mary unloaded Rosie, her husband’s gaited Morgan.  I have never seen Mary ride Rosie and its been a long time since Rosie was out on the trails.  I thought “so much for having a leader horse among the ranks.”

Fancy started out leading at a nice clip, but did have her “Vera” shoes on.  Veered and this, veered at that, gawked here and there, spooked at a piece of plywood she spotted about the same time I unzipped the zipper to my vest.  But nothing I wouldn’t expect from a new, young horse.  She was actually really good. 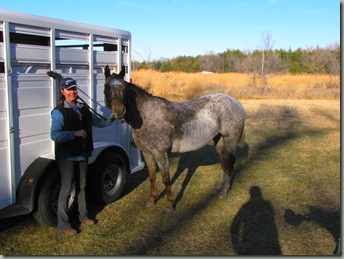 (Side note:  by the looks of this picture, I learned NOTHING in class!)  The horse is partially shaded, my shadow is in the picture.  Don’t blame Alan for this one! 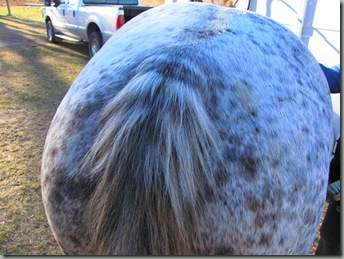 Jules’ new mare, Zeta, was a rock star for her first time out on the trails.  She is a six year old appaloosa mare, trained in reining and making her debut on the trails, as far as Jules knows.  She probably stands 14.2hh and is just as cute as a button.  For those who aren’t warm to appys, she will change your mind.  She has a darling personality, cute little bobbie socks and an interesting tail.  Look at the stripes! 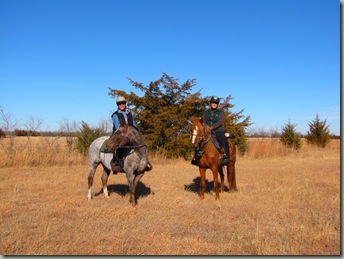 Rosie turned out to be a good lead horse and stepped up to the plate on a few occasions when our “new mares” weren’t sure it was safe to proceed.  If Rosie goes, they would be less tentative about taking the next step.  We trotted through some of the open fields, crossed a sand bridge and walked through some water that still was covered in the morning’s ice.  Both Fancy and Zeta weren’t too keen on it breaking under their feet and went for higher ground. 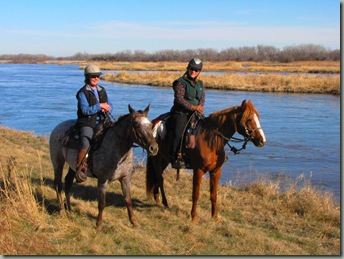 We rode out on the river and interrupted a goose hunter.  Evidently he didn’t see us or wanted to make sure we knew he was there when he fired four shots and brought down a goose not far from where we were standing.  We decided we should probably find another trail.  The same horse that spooked at plywood was unbothered by the sounds of gunfire.

I feel a little like I am cheating on Windy, but I know that every ride I can put on Fancy is important right now.  The more I can expose her to, the more she sees, the more conditioned she becomes – the better trail horse she will be.  She has some pretty big shoes to fill, and although her style is quite different, she is coming along just fine.  I know we couldn’t replace Ginger, but I’m confident Fancy will get where ever “there” is in her own way.  Tomorrow I am taking both mares out again and a friend will ride Fancy.  We’ll have her good and broke by the time John has time to start riding with us again.