Early in the week when Friday’s forecast was predicted in the fifties, a few of us with flexible Friday hours started making some ride plans.  I work from home on Friday mornings and was so confident it was going to be a slow day that I blocked my calendar and took PTO.  But Murphy’s Law kicked in and that didn’t happen.  I was worrying if I was going to make ride time at all that afternoon.  I did, but was late.  I hate being the one people are waiting on because I know how frustrating it is – especially when a day like Friday temperature wise was a gift we won’t see very often again for months. 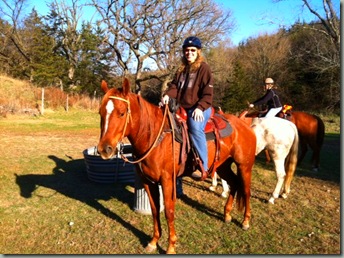 I brought both Fancy and Windy and Fancy served as a guest horse.  I wouldn’t loan her out to just anyone, but my friend, Corie, is an experienced rider albeit she is just coming off an injury.  I assumed she would ride Fancy but gave her the option of Windy.  Truth be known, Windy isn’t the easiest ride.  But from everything Corie had heard about Fancy, she was fine riding her.  We tacked up quickly and hit the trail about thirty minutes later than planned (big sigh).

Camp Moses Merrill is a private bible camp and convention center located about 20 miles north of me.  And they are kind enough to open their near 600 acres to horse trail riders for a small fee.  It is a very tough ride on the horses; lots of hills and tough on riders if you don’t know where the trails are as many are hidden among the the trees.  We’ve been riding there for over ten years, so not so tough on me except times like this after the leaves have fallen; sometimes the trails just disappear under it all. 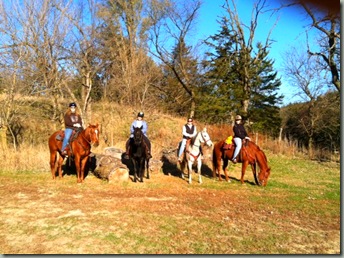 We saw an abundance of deer; they don’t hunt Camp Moses, so I like to think they are taking shelter from the season which starts today.  We were startled once by a man approaching us in camouflage. He was coming from the adjoining property and putting up No Trespassing signs in preparation of hunting season, ensuring that riders don’t get off the trail and into the warzone of high powered rifles.

One of the trails open up to a hay pasture which appeared the camp had sectioned off with electric fence for their personal herd to graze.  We continued up the field road and before my eye could catch up to the fact that the electric fence was down, Windy stepped into it.  She startled, spun and started to head back down the trail.  I could hear the fence still on her foot and while attempting a one-rein stop,  my brain was telling me to bale off.  As I was looking for a soft place to land, Windy stopped.

Now mind you, this field road was not a path but a pretty wide open space.  After the fireworks and thinking that was the only suspect part of that fencing, we continued on – all the while watching the fenceline.  I was following Mary on her horse Sara and Corie on Fancy.  We all saw at the same time the fence was down again.  I looked at the horses in front of me and saw that it was laying on the ground about an inch left of Sara’s hoof.  Fancy was to Sara’s right.

I got off Windy and gave her to Lauren who was riding behind me and started to approach Sara so I could move the downed fence.  Probably hearing Lauren leave with Windy, Fancy started to back around Sara.  Before I could get to the fence on the ground, Fancy was caught up in it.  I cringed as I saw Corie struggling to keep Fancy still while looking to step off.  And what was no time at all, Fancy was out of it and standing still enough for Corie to quickly dismount.  I am not sure who was shaking more:  the horses or Corie and me. 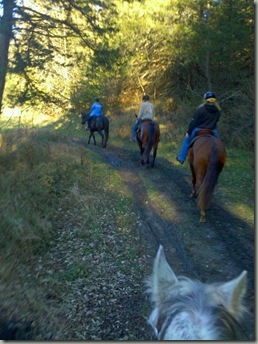 There were five riders and four mares and a gelding.  Corie said Fancy was a bit snarly at the other horses; a side of her I haven’t seen yet (Fancy, not Corie

).  I think she is starting to gain some confidence and is getting in a little bit better physical condition so perhaps we are seeing a little stronger Fancy.  John will enjoy that; he is not used to a quiet ride although I think he is starting to appreciate it.

The weather gods surprised us with temperatures that reached sixty-six degrees.  Such a gift for November 11th in Nebraska.  Although today is to be just as nice, rifle season opens for deer hunting, so being out on trails on a horse is not the place to be.  I will probably ride a bit in our arena or pasture just to take advantage of the day but won’t be dodging any bullets out and about on the trails.