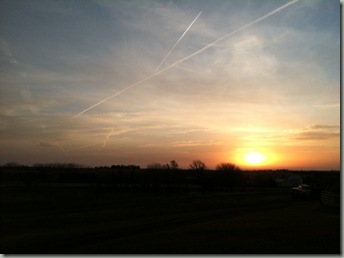 The title should not be confused with “Riding Windy”.  I rode Fancy… in the wind.

I hated to leave my housework post as my only accomplishment this weekend, albeit I did get the place a bit livable for now.  Having been gone all last weekend and having to travel twice this week for work, things were looking pretty chaotic on the home front.  Laundry is now under control and I could safely invite in guests without too much embarrassment.

Anyway, back to my windy ride. 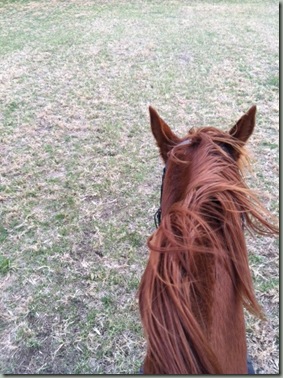 November is teasing us with near sixty degree weather, but true to Nebraska, it doesn’t come without wind.  Today it started blowing in the morning with gusts over 40 mph.  It’s hard to enjoy the warmer temps.  But, not to be discouraged – because it could be 30 degree with wind – I decided I would ride.

I had planned to ride Windy, but I’m a bit nervous about taking Fancy on an event tomorrow, so saddled her instead.  I can tell she is getting much more confident in the weeks since we had her; she lunged nicely for me and I saw enough that I was ready to ride.  After a little while in the arena, I took her off to discover the trail around the perimeter of our property. 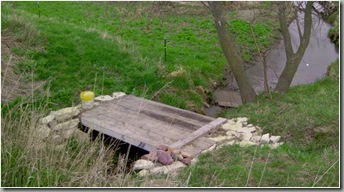 I worked her on going over the bridge quite a bit before I finally relented and led her over it.  After that, we crossed it a few more times on foot and mounted.  Same with the water crossing which is next to the highway.  I have to admit I didn’t spend a lot of time on the try on this one.  I still have nightmares over the highway scene on The Horse Whisperer.  In my mind, I could see her bolting up the hill for the highway.  In my mind, I told myself to dismount quickly and keep a hold of the reins.  The mind can play funny tricks on you.  But alas, there were no highway scenes played out.

We did gates, we opened the door to the truck, we walked over a log… we just took care of business.  I won’t say she wasn’t nervous – she was – and so was I.  But she left the barn, she left the herd and she did pretty much everything I asked, so can’t complain.

So, as I mentioned earlier – tomorrow I am stepping out of my comfort zone and taking her to an event called The Haunted Trail Rider Challenge.  From what I understand, these are obstacles set up in an arena; a competition of sorts.  I am going solo and my goal is to just expose her to new things and in the process hopefully not embarrass myself too bad.