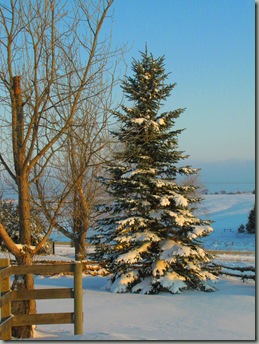 It seems I can go a week sometimes and not find anything blogworthy.  Not saying that my recent topics are necessarily so but when I get the urge to blog and have the time to blog, I should definitely blog.  Makes up for those times the ideas just dry up. 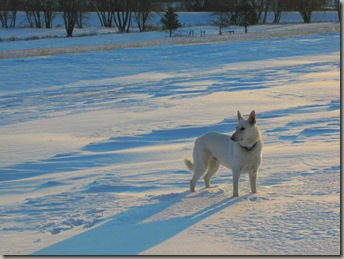 I woke up pretty early this morning but decided it was too cold and dark to do anything and went back to sleep.  It was light out when I finally got up again.  Bo had joined me on the bed and he fell off!  That’s what woke me up.  Did you ever hear a St. Bernard fall off the bed?  KerPLUNK!

John had already started a fire in the wood stove and the house was warm when I got up a second time.  After I had my coffee, I slipped on my coveralls over my flannel pajama pants and sweatshirt, put on snow boots, grabbed my camera and went out to check the horses.  There was no breeze and the sun was shining.  At 23 degrees, it didn’t feel too bad. 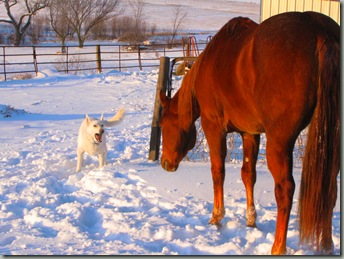 Baby met me at the fence.  That horse really needs a job.  I wish I had the interest… I just don’t.  Fancy came over next and Ritz barked at her heels.  She gave him the “what-not”.  You would think his interest in herding the horses would wane since they have no interest in being herded.  But it doesn’t. 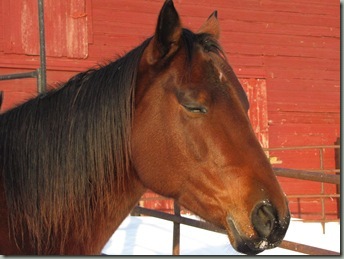 Windy was dozing in the sunshine on the other side of the barn and I could see by how she was standing that she had snowballs in her shoes.  That must be miserably uncomfortable and I once again scolded myself for not getting them off sooner.  I went and got a halter and lead and brought her over to the barn.  I ended up getting some tools and a hammer from John’s shed to get the frozen mass out of her shoes.  She stood much better. 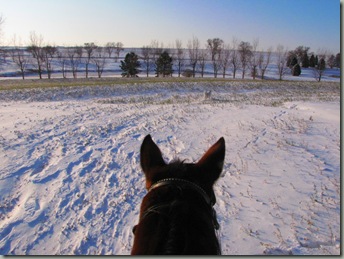 I couldn’t resist.  I grabbed a pad and my nylon Circle Y saddle and quickly tacked her up.  I held the bit in my hand for a minute to warm it up before slipping on her bridle.  I took off my coveralls and put my coat back on over my sweatshirt and rode out into the field.  I’d like to say I was dashing through the snow, but the footing was not good especially with shoes on.  So we just pondered through the field, down past the cottonwood grove and around by the lower pond. 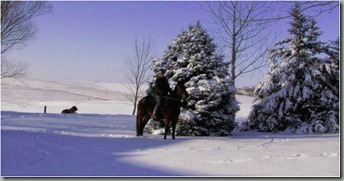 When I rode back up through the yard, John came out of one of the outbuildings.  I don’t know if he was surprised I was riding or not.  I told him about how awful the snowballs were in her shoes and mentioned we needed to get them off.  Then I asked him to take a couple pictures of us.  So seldom is anyone out when I am riding and the snow was awesome. 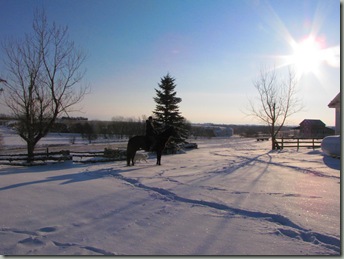 John is not the best photographer.  Actually, he holds the camera so awkward I am surprised he can take pictures at all.  I should have mentioned the zoom button, but at least he found the viewfinder.  I was hoping he wasn’t taking directly into the sun, but he did and really, the picture turned out kind of cool. 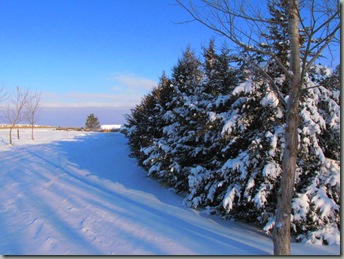 I didn’t ride long; just enough to say I did and get my fill.  The dogs enjoyed the jaunt through the field and I think Windy was glad to get out of the corral for a bit, too.  I didn’t take her out on the roads because it was too slick. 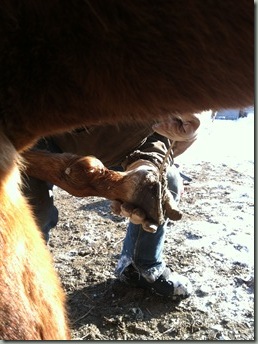 After the ride, John came over and we pulled out the necessary tools to take off her shoes.  And then we pulled Fancy out and took her shoes off as well. 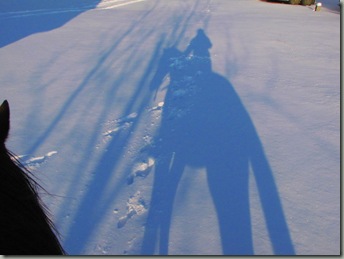 McCain and I went out and started Christmas shopping today.  Got quite a bit checked off the list; I wish it were done.  Temps will be in the low twenties this week.  I will be in Florida for three of those days.  As much as I am not looking forward to traveling, I can’t think of a better place to be.