When I went to ride yesterday, I asked John if he wanted to go with me.  He said “no” and that his horse was lame.  Huh?  Admittedly, I have been buying trucks and Christmas groceries; I have not made it to the barn all week, even though it is right out my back door.  When I went to fetch Windy, I noticed Fancy had a cut on her back leg; not a gaping wound but some puffiness. 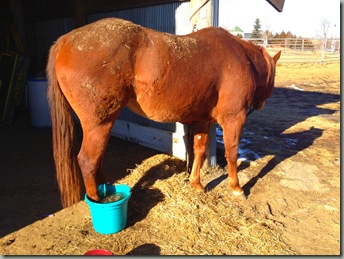 I filled a bucket of warm water and Epsom salts and brought her in to the lean-to for a soaking.  After fighting Butter-butt with soaking her foot when she had an abscess a few months ago, I was pleased that Fancy stood so nice while it soaked.  At one point, our dog, Bo, saw the cat on the other side of Fancy and sprinted under her belly to get to it.  Did I mention Bo is a 125 pound St. Bernard and if he could stand erect, he would be close to 5’8” tall (we measured).  The horse did not move or flinch.  I am not sure she knew he did it.  I was sitting on a bucket next to her foot cleaning the wound and about fell off my bucket, but Fancy didn’t flinch.  I think she must be drugged again. 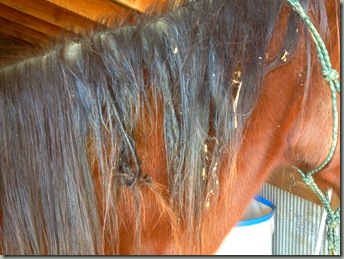 While Fancy soaked, I pulled Windy in and started to detangle her mane.  It was a knotted mess.  I started with a little Show Sheen and a good brush, but eventually had to cut some of the knotted curly locks out.  That’s okay.  She’s just a trail horse. She looked much better after her grooming and had to have felt better, too.  I even got most of the knots out of her tail. 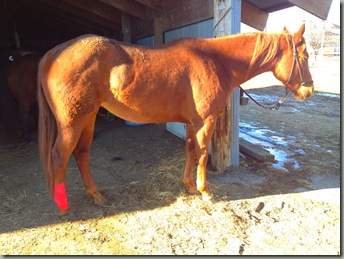 After Fancy was soaked and dried, I put medication on the wound and wrapped it up.  I put her in the front run so that she doesn’t have a lot of room to move around on it and the ground is not as choppy there.  It was probably pretty messy when it happened but it should heal up pretty well.  Unfortunately, I won’t be able to use her this upcoming week like I had planned. 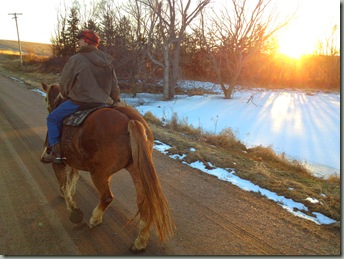 The temps reached close to 50 again today.  John and I pulled the fat mares out of the pen and decided it was time they earned their hay bale.  He saddled Baby and I rode Butter.  We initially planned to just do a quick 4 miles but the weather was so nice and even though the mares were a bit sweaty, they were traveling pretty well, so we ended up doing a little over 6 miles.  Butter got a few bucks in on me but nothing serious or much more than a crow-hop or so.  She’s a feisty one!  But I did have a great ride on her.  Baby was pretty sweated up when we got home; I’m sure riding a wide ride like her was a lot harder on John than riding Butter was on me. 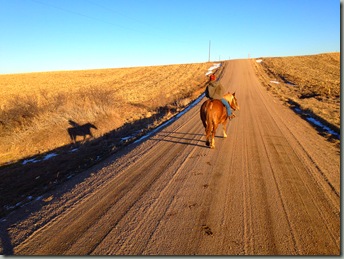 I have another week of vacation left and plan to ride as much as I can while the weather is cooperating.  I am heading toward Lincoln tomorrow to ride with some friends.  I just might make my Trail Time goal after all. 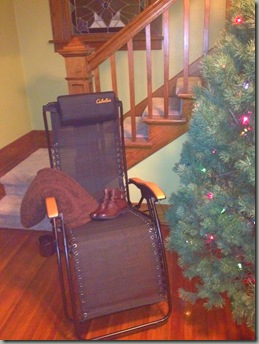 Santa continued to be good to me.  Besides the Ram and the half boots, that I picked out for myself, John and the boys got me a couple of Cabelas chaise loungers for camping and an incredibly soft throw which just might go in the trailer, too.  It was a good day.