It Didn’t Fit Under the Tree

As most of you horse folk know, buying the horse is the cheapest part of horse ownership.  It’s the toys that go with the horse that cause stress on the pocketbook.  About six months after we bought our first horse, we bought a new (to us) truck.  And then a couple months later, a stock trailer so we could haul to the trails.  We were set to go! 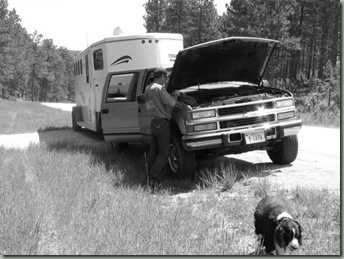 Over the years, I have upgraded trailers but never trucks.  Those diesels are suppose to drive forever, right?  Our truck become the joke among my friends, from the time it caught fire pulling into Cowgirl Weekend 2004 to driving across Nebraska 45 mph in 2008.  And don’t forget last year sitting in our lawn chairs at a truck stop in North Platte for 6 hours while John’s head was under the hood and then having to start it with a pliers the rest of that trip.

Twice this past season, it quit on me while I was hauling and I had to unload Windy and ride her home.  The final straw was when the brakes failed a few months ago and the only way I could stop the rig was using the hand brake on my trailer.  Thank goodness I was hooked up. 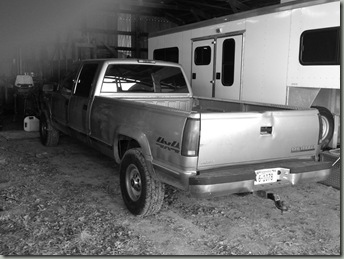 Oh, those are just a few of the stories of HiHo Silver.  There were more and they were often.  Every year I threatened to get another truck and every year John would say that whatever was fixed took care of it and he was ready to go another 100,000 miles.  Empty promises.

Yesterday, HiHo Silver officially retired.  At least from my service.  John refused to part with it so its his problem now. 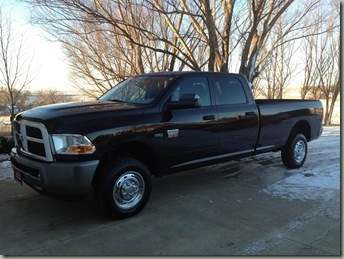 Welcome, Ram.  (And please note that in 2011, Chrysler officially removed the name Dodge from the Ram truck lines.  I don’t know why I think it’s important that you know that but it was important to Chrysler that I do, so I am passing it along.)  It’s a 2011 3/4 ton Heavy Duty long box in UPS Brown.  Okay, they didn’t call it that color – they call it Rugged Brown Pearl.  And its more sparkly than the UPS truck.  It’s big and bad and no doubt a gas guzzler but has new car smell and will hopefully get me from here to there for many, many years to come.