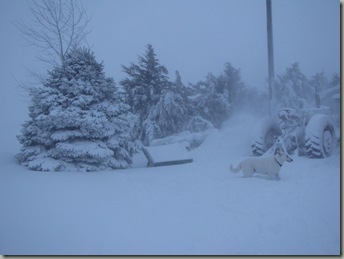 Just pinch me.  Nebraska does not have temperatures in the mid-fifties on December 28.   The above picture was taken just two years ago when we were snowed in on Christmas vacation.

There is a slight chill to the air if you try to do anything outside before noon, but come on!  This is crazy-wonderful and I am enjoying every minute of it.  I know I should probably be worrying about global warming and a possibility of a draught and I will, I promise, after I go back to work after this short vacation.

Today I went out to the corral.  I found Baby laying in the sun and sat down next to her and snuggled in her big neck.  It was that time of day when the air was still nippy, but the horses felt so warm.  Blue came up to check out my pockets and smell my gloves and nibble on my fingers.  I later found a mint in my pocket; he must have known it was there.  I didn’t. 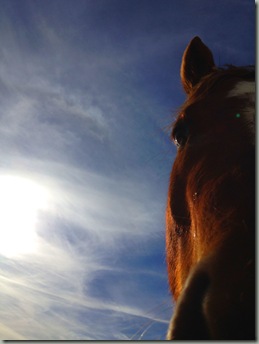 I took Fancy over to the front of the barn to treat the wound on her ankle and found that out of the wind, it felt so good.  I sat down in the corral, my back to the shed to block the wind and watched Windy as she played in the tank. 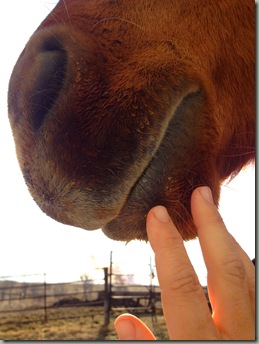 Fancy walked over next to where I was sitting and smelled my shoes, my knees, and for the longest time, nibbled softly on my fingers.  It is the most affection she has shown since we got her.

The chill of the day was over, the breeze started to warm up.  I saddled up Windy and Ritz and I took off down the road.  I needed less than an hour to make my 250 hour Trail Time goal and we breezed right past that today.  At about the middle of the third mile, Windy started picking up some speed, so I kissed her into a lope.  She settled into a nice speed to the end of the mile.  I slowed her to make the turn, expecting her to drop back to a walk and was surprised that she continued to move out.  We ran the next mile and almost 3/4 of the next one.  I was getting tired, but just decided to let her pick the pace.  I finally had to pull her in when a car was coming up behind us. 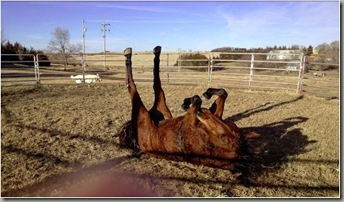 We walked quietly the rest of the way home, giving her a chance to catch her breath and cool off.  I think Ritz was even slowing; we don’t normally move as fast as he does.  I unsaddled her and put in her in the round pen to let her roll in the grass.  After she went through that ritual, I went in and brushed her out. 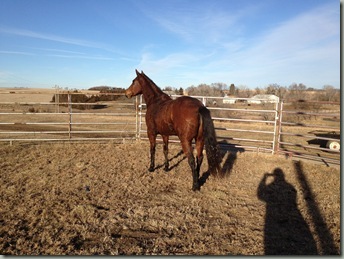 I am 50 years old and I galloped my horse down the road today in the middle of winter…   I thank God for my health and my good horse and the weather and my happiness.  There are days, it seems, my cup just runneth over.  Today was one of those days.