Flying with the Gov I drove down snowy roads to get to the airport on Monday morning and landed in Austin that afternoon to temperatures in the high 70’s.  The rental car place tried to place me in a minivan.  I wanted a convertible.  We settled on a Dodge Avenger and for the record, there was no way in hell I was going to drive a minivan no matter how much they tried to convinced me it was an upgrade.  I don’t do minivans.

This was the first trip down to Texas that I actually had some spare time away from work related activities and contacted my old roommates, Kris and Kelly, who live in the Austin area.  They moved to Texas about the time I moved to Saunders County.  We don’t see each other often anymore, but have always kept in touch.

Kris lives near Bastrop County and was in the path of the fires this past summer.  She has horses but no horse trailer.  She had a friend with a trailer on standby to evacuate and when they got the call, they had to move quickly.  She worried that her friend wouldn’t make it in time and cried as she put tags with her name and number on her horses’ halters; prepared to open the gate to let them go.  But her friend made it in time and in the end, the fire stopped about a mile from their place and it was spared.  What a scary ordeal.

Did I mention I didn’t unpack my jacket the entire time I was in Texas? 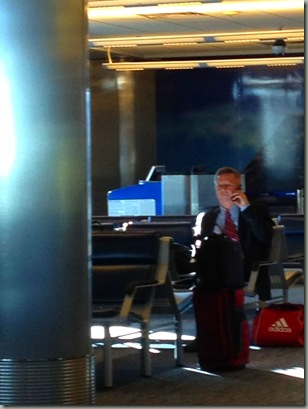 I had a layover in Denver on the way home.  I glanced up to see Nebraska Governor Dave Heineman sitting at the same gate as I was at, talking on the phone.  I took the above picture with my iPhone, totally Facebook-worthy!  I had met our Governor on another occasion and he is very approachable.  Before long, he was making the rounds visiting with those at the gate.  He stopped where I was sitting and I shook his hand and made small talk.  When we boarded, he was seated two rows in front of me, continuing to talk to other passengers traveling to our state capital as they boarded the plane.  His body guard was in the row ahead of me.  I felt safe.

The sun was shining today and it warmed up to almost fifty again.  Feeling almost 80% now, there was no excuse not to ride.  I saddled up Windy and we did a quick 4+ mile loop through the fields.  Sundown caught us quickly and it was dark when I put her up.   Snow is expected again tomorrow.