A Little Comfort for Blue 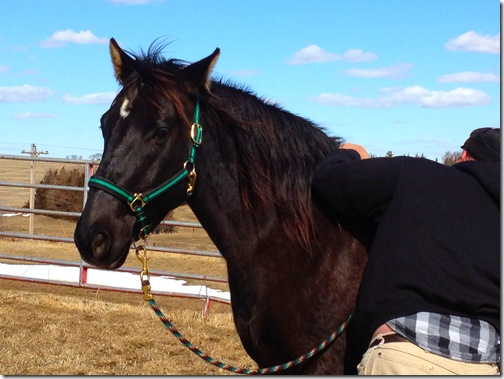 A blustery weekend.  The sun was shining but the wind was fierce.  Yesterday was spent inside at a tack sale and hanging with horse friends.  Couldn’t have picked a nicer day to do just that.  Had hoped to get a nice ride in with Mary, Dwight and John this morning, but the wind started up again early.  I had a vet coming out to look at Blue and he called as we were a few miles into our ride and none of us were disappointed to cut it short.  Out of the wind it was sweater and vest weather and in the wind; full winter gear. 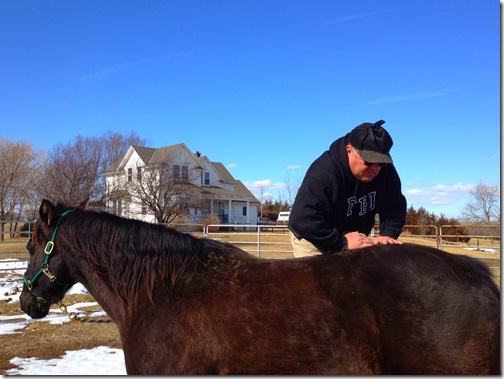 We bought Blue in the year 2000.  The first couple of years, he was primarily my ride and then the kids each took their turn with him.  A variety of riders, saddles and his terrain.  He was always soft footed, but started to be off a bit – one would say a ‘hitch in his giddy-up’.  It never seemed to be pain related; just a condition and he would work it out.  One vet said a knee problem, another stringhalt; both offering advice on shoeing options to help him stand up better.  We vacationed with Blue in 2008 and 2009 and then the kids quit riding and except for an occasional Platte River Ride, he has been semi-retired. 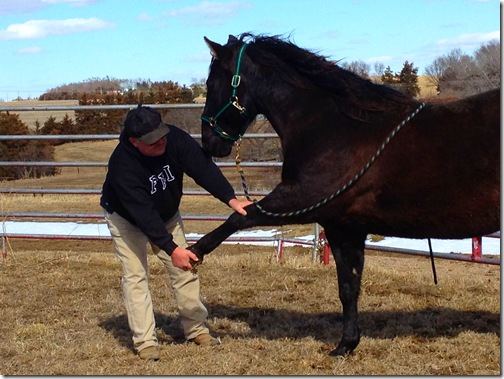 After losing Ginger last fall, we never really thought about pulling Blue out of his quasi retirement.  Anytime we have rode him recently, he seemed so rough.  But dang, he’s a good horse.  As I am putting on miles for the Distance Derby, I have wanted to include him in the rotation but his jarring trot is unbearable and when asked for a lope, I could not get him to stop cross firing.  He seems to have gotten worse.  John and I decided if we could get him back to where he was when rode regularly, we would each try to continue to put some time on him.  We decided to try a vet who does chiropractic adjustments. 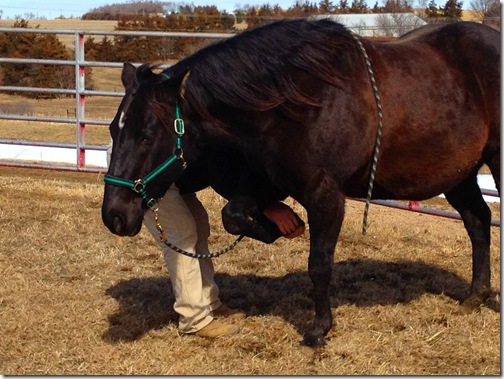 No Blue is not perfect.  As my farrier says, Blue can be a “prick”.  Since he hasn’t been in work mode, he has decided he doesn’t need to pick up his feet for the farrier and ended up with the “twine across the gums” the last time.  So I decided to set him up for success with this vet and worked with him on picking up his feet.  Using my own version of clicker training, I would pick up his foot and if he held it quiet, click with my tongue and reach behind me with a treat.  Blue is very food motivated.  After our session, he stood quietly while John trimmed him and he was ready to go for the vet today. 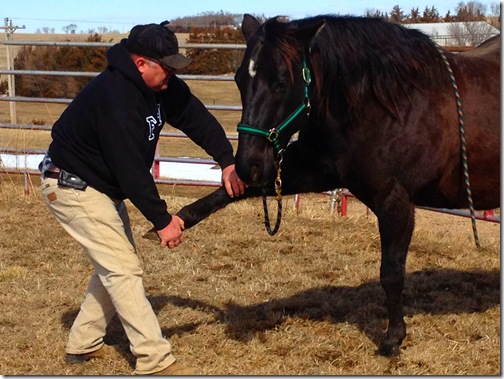 The pictures through this post were taken with his session with Dr. Zink.  I was very impressed with how Dr. Zink talked to Blue as he worked through the manipulation; at one time even hearing a “pop” from a distance away.  Blue could have very easily been a “prick”, but he wasn’t.  Perhaps whatever Dr. Zink was doing, felt good. 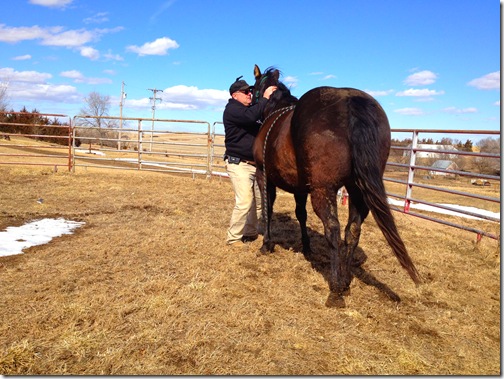 He spoke to us afterwards about areas of concern.  Unlike the human chiropractors, he did not put us on a series of manipulations, but said to work with him and look for improvements.  He felt he did relieve some of the trouble spots and that he had been out for quite awhile.  I hope we were able to provide Blue with a little relief.  He took good care of us for many, many years.