After work yesterday, I put a little over five miles on Windy.  We had a nice ride through the fields and over on the south mile road.  We had some things to do with the kids later last night and by the time I got home, I felt a killer headache coming on.  Still plagued with it this morning, I took one of my mega-headache pills, I called work to take care of some items that had to be done, moved some meetings and then took a day of PTO.

By noon, the prisms in my eyes were gone and the meds had kicked in.  I wondered out to the barn where the horses were napping in the corral.  The sun felt so good.  I had the afternoon off.  Why not ride?  Not being 100% and with the mega pill still in my system, I figured I probably shouldn’t stray from home too far.  Perhaps just get the B-team out and do some arena work.  (Big groan; I hate arena work). But if I did just two miles each on the three of them and then three miles on both Fancy and Windy, I would break my 100 mile mark in the Distance Derby.  Now that was a goal! 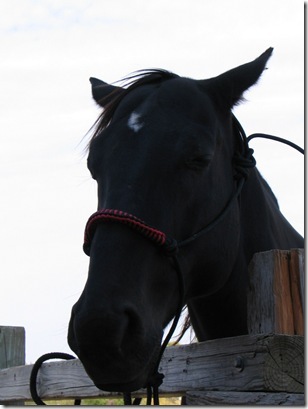 Blue was first up.  OMG, would someone put some time on that horse?   He would sneak in a crow-hop about every 3rd lap!  He was nervous and jumpy and more uncomfortable than normal.  It didn’t help that Fancy had her head over the arena fence watching him.  She’s his new love, you know.   I don’t know how, but I pulled 2.61 miles out of his butt!

Round 2 was with Butter.  I barely got a mile on her and decided she needed a time out; the pushy beyotch!   Baby was up next. 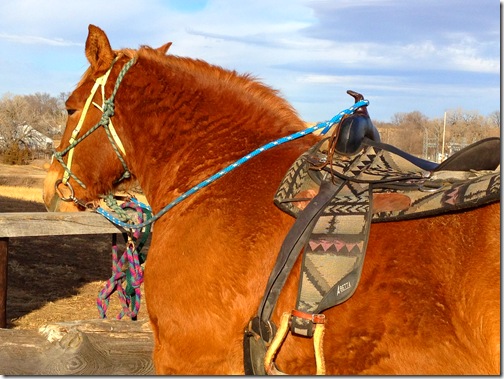 Now you all recall, Baby is a draft horse; a hay-burner.  Baby doesn’t have a job.  I saddle her up in the only saddle we have that is close enough to fitting her only because of its fiberglass tree.  And I slip the headstall on which McCain got for me for Christmas one year that didn’t come close to fitting the quarter horses.Now pretty is as pretty does.  The picture above should tell you something about how this ride goes....

Because Baby is a fat draft horse, she has no withers to speak of.  She stands close to 16hh tall and mounting from the ground, although doable, is tough.  The saddle slips or she moves…  frustration building.  I tried to sidle her up to the bucket which I use with the other horses and she would move away as soon as I would step up.  Finally, I took her to the mounting block by the barn and nine minutes later, I am in the (now very loose) saddle.  We went to the arena and I rode her about 3/4 of a mile.  That was it.  She wore me out.


Butter’s time out was over and I took her back to the arena.  She would stall by the corner with the gate and have her little fits.  So I fetched Baby and put Baby in the corner.  She does not like Butter.  The first time Butter stalled near that corner, Baby moved her big fat butt in Butter’s direction.  I then had the nicest 2 mile ride on Butterball.  She actually got a little soft.  Soft Butter.

I saved the best horses for last.  I figured if the B-team gave me fits, Fancy and Windy could make up the miles.  Since I had been resetting the GPS with each horse, my best guess was I needed about 6 more miles to hit 100 Distance Derby miles.

Fancy was good as gold.  I got some nice lopes in the arena and she was light and comfortable so I quickly moved her out to the field.  We walked, we trotted and we loped.  It was probably one of the best rides I have had on her here at home.  I put her up at 4 miles.

Windy was saddled and ready, so I fetched my dog and we headed down the road.  I figured I had about an hour until dark and I only needed a couple more miles.  It was time to enjoy the ride. 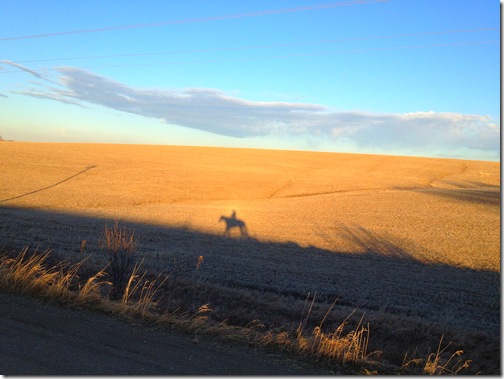 My ride on Windy was remarkable.  Not because we broke any speed records or did anything different than we normally; we just simply went down the road.  Her ears were forward, her movements steady.  She kept a pretty good 4.0 mph pace.  I read email on my phone as we moved quietly down the road and before long, we were three miles out.  I was wearing just a long sleeve t-shirt and poly vest and was getting chilly.  I started to dread the 3 miles trip back home.  I tucked my fingers under the front of her saddle pad.  She moved into a slow trot and carried us home.

I downloaded my tracks from the GPS and surprised to find I not only hit the 100 mile goal, but rode a total of 17.25 miles.  Not bad for a sunny warm day in February.

Work has been pretty overwhelming lately and I am sure the headache was brought on by tension.  There is nothing like a little horse time to cure all.