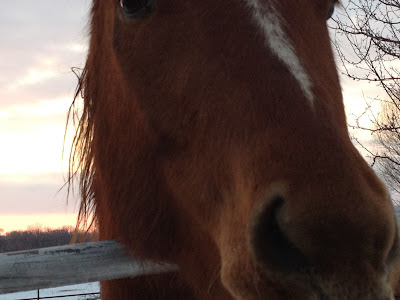 It was nice enough outside when I got home tonight but almost dusk, so really no time to ride.  From the kitchen window, I saw Windy rolling - probably just itchy - but I always worry nonetheless.  I changed clothes and went out to the barn.


By now Windy had joined the rest of the herd.  She saw me coming - no doubt waiting on me to go to her.  But the corral was muddy and this was about as far as I wanted to go.  We were at a stand-off.  While I waited, Fancy sidled up to Blue and started to play.  She is probably in heat but it was fun to watch her try to engage him.  She would rear and buck and shake her head, then prance around the corral and come back to him. 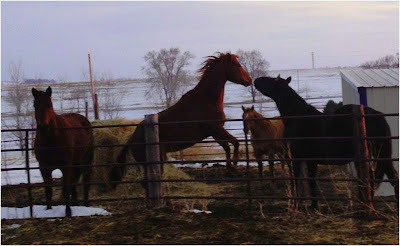 I love that it looks like she was trying to kiss him here and he was kissing back.  I worried about Blue when we lost Ginger; they were inseparable.  It broke my heart when I would see him walk by himself from the pasture to the barn as if he was looking for her.  But when we brought Fancy home, Blue was the first in our herd to accept her and they have grown quite close.  I often see the two of them standing together in the sun.  I like that. 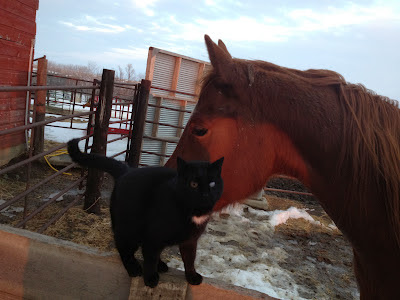 Windy couldn't stand it any longer and made her way over to see me and Fancy followed.  Mickey, the one-eyed kitty, had made his way out of the barn and was standing on the fence.  Fancy came over to check him out; neither scared of the other.  Doesn’t Fancy have a pretty face? 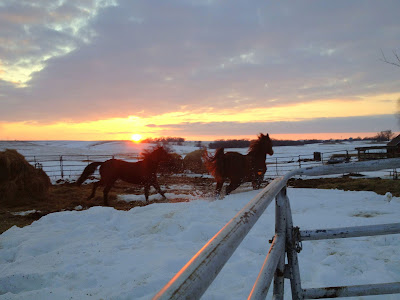 She then engaged Windy in play; running through the corral, tails flagged.  It occurred to me as they passed the last time that I should be using the video on my iPhone; hearing them tromp through the snow and listening to them snorting as they played.  I switched the camera over and videoed the next few clips.


I tried to encourage Windy to go play and she moves off and Fancy moves in next to Blue.  He quickly moves her off and if you look quick between Blue and Baby you can see Fancy "dancing" behind them.  I regret moving the camera off so quickly.
The footing is not good, and Fancy slipped in the hay and fell to her side at one point.  Not to be discouraged, and with some encouragement from Windy, she gets up and moves out again.
No, I didn't get to ride, nor did I really want to.  Too mucky and slick.  But I did enjoy the show.
.
.
- February 15, 2012