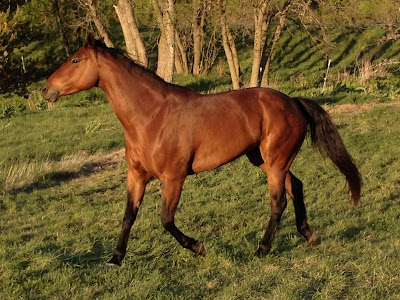 Caught this shot of Windy out in the pasture the other day.  She is completely shed out now although she could still use a good bath.  The temps have been running between the mid-60's and 90 lately; one morning there was frost in the lower pastures which normally wouldn't be unexpected in April except this year has been so different.  Our alfalfa is ready to cut; unfortunately planting season is starting, too.  I hope our neighbor who cuts the alfalafa will be able to squeeze it in soon. 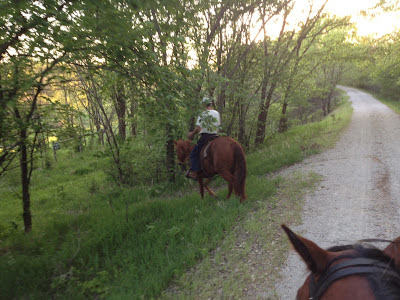 ﻿
I took some more "after" pictures of Fancy the other day but haven't been at the computer with the "before" pictures on long enough to do a compare.  I think being out on pasture has helped her weight.  Her coat is starting to look a little better but nothing like Windy's.  I'm hoping I'll see more of an improvement after a few weeks on pasture.

I have ride plans this weekend; was planning on making it a long one but storms are rolling in tomorrow.  Saturday and Sunday are suppose to be nice so hoping it can be salvaged.  Two weeks until McCain's graduation.  Lots to do to get ready but dang, I need some down time.  Horses are my therapy.