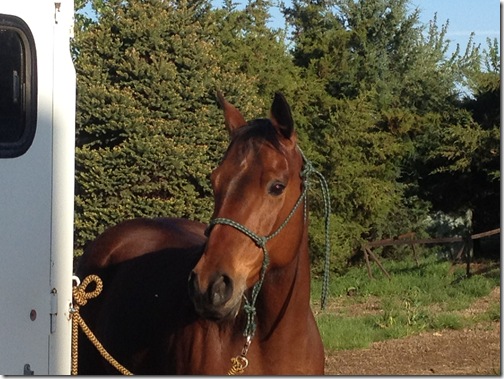 Yesterday our trails committee sponsored a trail clearing on the Oak Creek.  It was just our small group of regulars with our nippers, loppers and chain saws ready to tackle what winter left behind.  Since the truck could only drive the limestone trail, I decided to bring Windy and ride the adjacent horse trail, marking where trees had fallen for those in the truck.  I also brought nippers and loppers and would clear any overhead branches from the saddle. 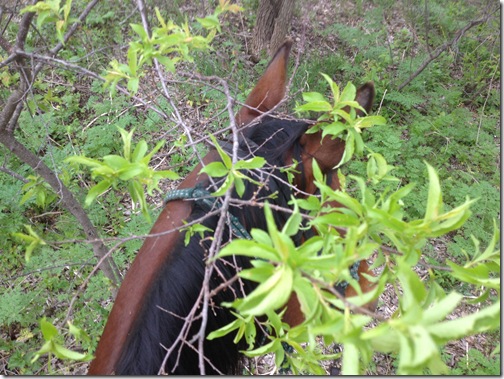 As I rode off from the group – a good mile or so ahead, we went over bridges, under branches, and around heavy equipment moving dirt for terraces.   We passed other horses in pastures next to the trail.   I would stop and trim branches above our heads, ask her to sidepass up to the tree, sometimes up into the tree, stand quietly while I reached above us both, pulled the limbs down to me snipping them with whichever clipper, and dropping brush on me and on Windy.  On her head, for goodness sake.  I would pull dead branches out of trees, drag them behind us and toss them from the saddle over to areas off the trail. 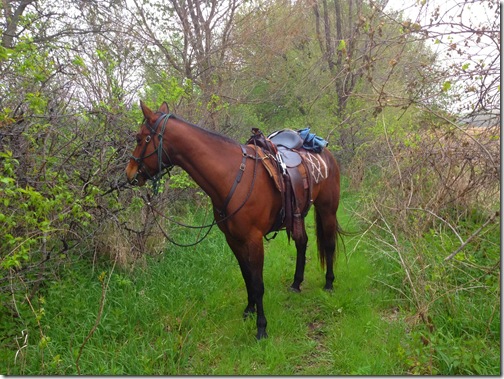 When I had to dismount, Windy would stand quietly while I worked on moving old branches off the trail.  Then I would cluck and she would follow me.  I had equipment tied to the saddle that I had to make sure didn’t poke me when I mounted and it was imperative that she stood still while I did so.  And when the storm moved in quicker than we planned with thunder and lightning overhead and rain pelting our sides, we ran almost 3 miles back to the trailer when her instinct was telling her to turn against it, drop her head and hunker down.  She did it because I asked her to.

I am sure that following Pat, Buck or (name-the-cowboy-trainer-flavor-of-the-year)  gives a rider more tools to be that much more successful with our horses, but you know?  We didn’t learn what we just did from one of those “gurus”.  We learned it from getting out there and doing it.  I couldn’t be more proud of how far we have come.   Even though she’s “just a trail horse”,  that’s alright with me.  (Name that song).