I’m cleaning.  Or I am suppose to be.  We have that pesky graduation party coming up this weekend.  Its good to entertain once or twice a decade so the house gets the long overdue once over.

But while I clean, I find things and as I put them away, my mind wonders.  This time it was my score cards for my four Competitive Trail Rides.  I know I have talked about them before on this blog and on Horsetrailriders but now, eight years after that first competition, I do have a different perspective.

I always wanted to compete.  I knew the distance wouldn’t bother me; usually up to 35 or so miles over a two-day period.  But it was everything else that had worried me.  Okay, to be really honest, just one other thing:  the obstacles.  Referred to as “observations” in some circles, it is basically being stopped along the trail and asked to perform some task; be it simply “observing” you riding up a hill or sidepassing over a log.  The whole idea made me a nervous wreck.  My horse won’t do that! 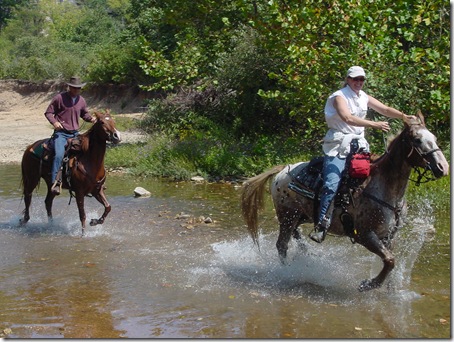 The first year I completed, back in 2004, I decided to do it only because I had a horse that might do some of that.  I had bought Jo, a seasoned appaloosa gelding, from some friends.  He knew how to sidepass and had the basics down.  Maybe we could make a reasonable showing.

A few weeks prior to the ride, he came down with a sore back.  And if that wasn’t enough, he also sunburned on those sores.  He was a mess.  Blue would never check in sound for a CTR; even at the clinic we took, one of the judge’s deemed him lame not really understanding that was just the way he traveled.  So I either forfeit my ride entry or take Ginger, John’s mare.

Ginger used to scare the bejeezes out of me.  As I got more comfortable in my riding skills, I gradually started including her in my rotation and that year, due to Jo’s issues, took her to Cowgirl Weekend.  I had a great ride there so figured, why not compete on her.  We probably wouldn’t do great at the obstacles, but Ginger loved to go-go-go.  She would do awesome as a CTR horse. 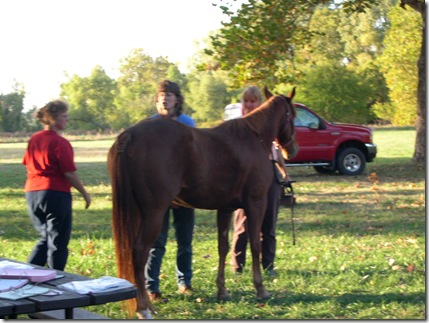 Well, it didn’t quite go as planned.  She hated the vet.  Anytime she would try to look in her mouth, I would lose control of her.  She walked off when mounting.  She forgot how to back, she rushed hills, and she was pissed!  I remember at one vet check, she was just pacing; wouldn’t hold still and I popped her on the head with an empty water bottle.  I was that pissed at her back!  When I tried to groom her after the ride, she raised her leg to kick me.  Ginger never kicked.  My saddle evidently didn’t fit well and she ended up with girth sores.  And to add insult to injury, here I was worried about the obstacles, never mind the fact that I really didn’t know how to ride and MY scorecard reflected THAT!  She was a mess, I was a mess.  I decided I tried it, did it and won’t humiliate myself ever again with this silly game! 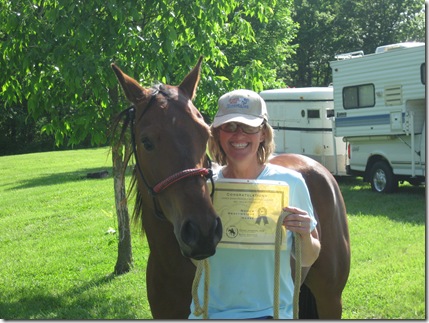 Fast forward five years.  Humiliation becomes humbleness.  And like childbirth, you kind of forget the pain.  I’m now riding Windy, Ginger’s only baby.  Far from perfect, but I am once again tempted to complete.  Not wanting to do it alone, some friends also entered as first time competitors and we made the trek to Missouri.  While my score card still reflected a lot of my same issues:  “need to be lighter in the saddle”, “landed heavy in the saddle”, “need better leg and rein aids” and “body position off”, Windy, on the other hand, surprised me.  Although she did raise her leg at the vet, it was more of a reaction to the stethoscope that she didn’t know was coming and I figured if that was the worse thing she did all weekend, we could get through it.  Imagine my surprise when my little mare ended up in 6th place.  It really did whet my appetite for another ride. 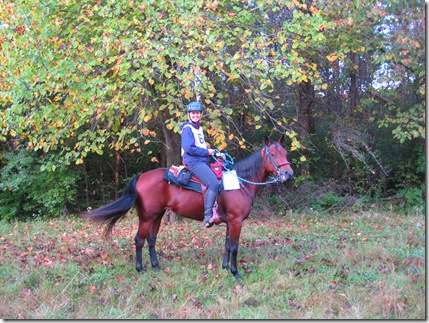 By the next ride that same year, my anxieties were over.  I knew what we had to work on and was pretty sure we wouldn’t embarrass ourselves anymore.  But when I opened my trailer to unpack tack, I found I had forgotten my best saddle pad in my other trailer.  Other riders helped out and offered up an assortment of pads, but following the first day’s ride, she had a little saddle sores where the rigging was off the pad and soreness in her loin.  Her other scores were  remarkable, but not enough to pull us into placing.  But did I have fun that ride!  Finally I was able to relax during competition and enjoy the ride. 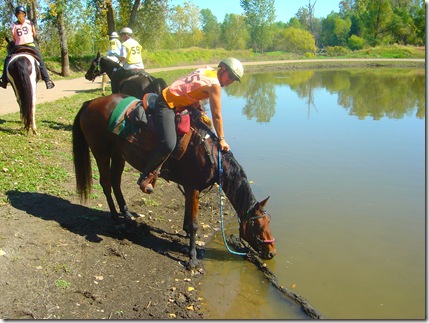 The next year, 2010, I was lured into competing in the same ride that I rode Ginger in all those years before.  The weekend was beautiful and my mare was beautifully conditioned.  When riders talk about their “zen” ride, this was mine.  The weather, the trails, the ride… it was all wonderful and if we never placed, I would have left happy.  As it turned out, Windy placed 2nd and for the first time, I came into the placings, too, earning a 4th place ribbon.  It was icing on the cake. 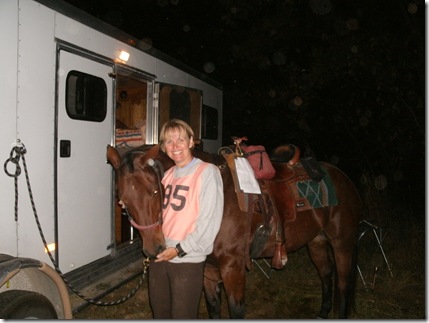 Where am I going with this?  I don’t know.  Just a walk down memory lane.  A little nostalgic.  I miss Ginger.  I wonder if we would have practiced if we could have done better.  She died too young.  She should have gotten a do-over at this.  And I wish I’d lose the weight I put back on so if I did complete, Windy wouldn’t have to lug around this added poundage.  Might be good incentive for me to consider dieting more seriously.

I do recall having a conversation with someone recently about the CTRs and their reluctance to do it because of the obstacles.  I think about where I started with Ginger and where I am at today.  Rather than letting the obstacles become an obstacle, I set out to learn to have better control of my horse so that we could make a decent showing.  With anything, it takes practice and know how and we are still working on all of that, but looking back on that first ride and the last, THIS is what the organization means about this competition helping you to become a better rider.