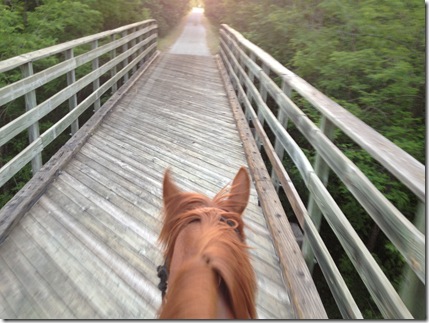 I told myself that today was the day I would get housework done.  Most notably taken down the graduation decorations.  I could say they were so pretty that I wanted to enjoy them for awhile and they were;  but truthfully, I have been so busy this week that even if I wanted to take them down, there was just not enough hours in the day.

It was the week before the Friday After Mother’s Day Ride.  I hadn’t given it too much thought just trying to get through the graduation planning.  And being the twelfth year, it does pretty much run itself.

A ride tradition, I strategically place “golden horseshoes” along the trail.  Those who find them win a gift bag, this year donated by Jane and Steve Shanahan.  I quickly painted the horseshoes and still damp with spray paint, dropped them in my saddle bag to head over to the trail.  I really didn’t want to make this a difficult job; time was limited, so I planned to ride Windy.  As I was putting on her halter, I looked up at Fancy standing next to her and thought, “why not?”  I took the halter off Windy and put it on Fancy.

I am sure I have mentioned here before that while I don’t have any issues taking Fancy out on the trail when I ride with friends, I have been pretty apprehensive about riding her solo since our parting of ways this past winter.  Something about the slight angst she demonstrates when I try to ride her away from the barn and the herd gives me a bit more angst.  I know I could and should ride her through it.  But frankly, I’m chicken.

But taking her out alone on the Oak Creek Trail is a good compromise.  It is not riding her away from the barn but it still is a solo ride so should count for something, huh?  John planned to cut up some downed trees at the end of the trail, so he dropped Fancy and me off at the end of the first mile and I’d meet him at the end of the 4th mile.  I made some notion about walking her until I got past the guinea chickens and the dog at the first farm and John quickly scolded me.  He told me I just needed to get on and ride or I was going to scare her.  Sometimes we need that little kick in the butt…. 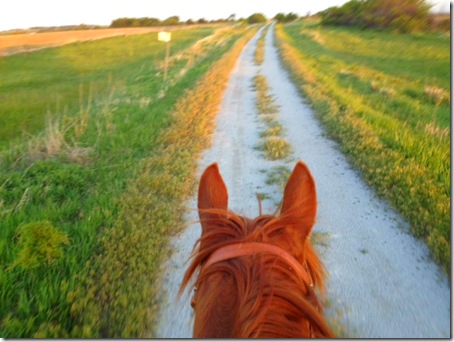 I took a deep breath, got on and headed into the trail that I know better than any other trail around these parts.   Immediately I started to relax.  She had a nice, easy trot going.  Curious as usual, looking left and right but hey, as long as we were moving forward I was happy.  We crossed bridges, we crossed the trickling creek, we went over the scary culvert and watched four deer run through the trail in front of us.  We even loped across the open pasture.  The only thing she would not pass were some purple flowers along the trail.  I am not sure if she didn’t think they belonged there or what.  I fooled her, though.  I turned her around and backed her toward them.  When her hip was even with the flowers, we did a turn on the haunches the other direction and went on down the trail.  Cheating?  Yeah.  But whatever works.

Fancy stood quietly while I placed the horseshoes; evidence of her good training.  We popped out of the trail at what we call the short mile and found John waiting with the trailer.  This busy ride week was off to a good start.