Dinosaurs on the Trail

Well, they can’t all be good rides.  You have to have a few of those not-so-good ones mixed in to really make you appreciate those that are effortless.  That hasn’t been the case this weekend.

Yesterday’s ride was okay.  Not fabulous but not bad.  Just okay.  I slept later than I normally do; my 5:20 AM internal clock did not go off and ended up getting out of bed around 7:00 AM.  I lost an hour of the best part of the day; the humidity had already started to make itself known.  I saddled quickly and did a ten mile loop.  It was a slow ten; averaging barely 4 mph, if even that.  It was just too humid to push her (or me) and there was no breeze to provide relief.   Although I put a heavy dose of Swat between her ears and used the fly spray generously, once she started sweating, those deer flies came calling.  I thought I should pack her fly mask next time, but didn’t. 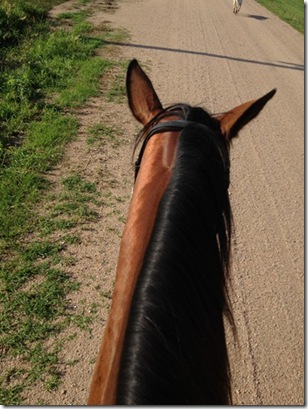 This morning I got up earlier and although still humid, it had the makings of being a nicer day.  (Relatively speaking).  This time I slathered the Swat on her ears, around her eyes and on her jowls.   We headed east instead of our normal west.  The first mile is not my favorite mile – a couple places you can’t get off the road when a couple of twenty year olds who live on that stretch come flying over the hill.  So I usually don’t relax until I get past that danger zone.  And we did. 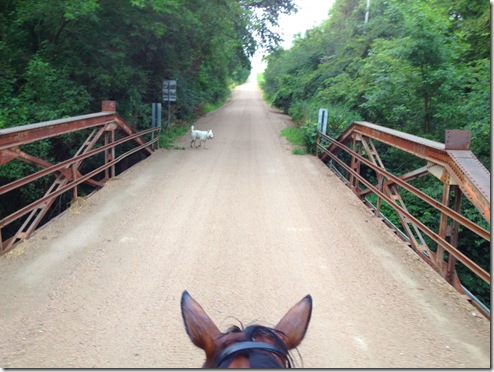 I only had time for a short ride and the route would be an up-there-and-back on the same road.  After the scary mile was the pretty mile;  a tree lined dirt road with an old bridge at the bottom and dozens of mulberry trees on the way back up.  As soon as we got into the shade, the deer flies started their pursuit.  The swat held them back but didn’t stop them from swarming.  I don’t know if Windy or I was more irritated. 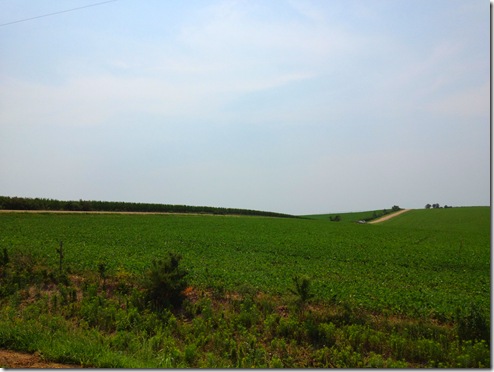 The next mile is kind of boring; corn to the left of me, beans to the right… here I am…. (name that song). 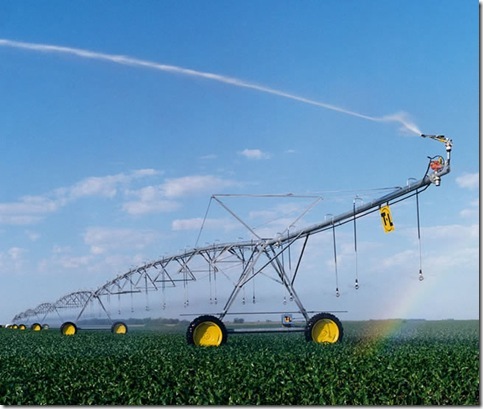 (Sample:  not our dinosaur)
Do you know about pivot irrigation?  They are big pipe-like sprinklers that are placed in fields.  I remember when the the kids were young, they used to think they were dinosaurs.  I’ve ridden Windy through baron fields in the winter, under the pivot units without even thinking about it.  Before we even got close to the cornfield, I could hear the pivots.  Didn’t think anything of it At. All.

Windy saw the sprinkler on the pivot before me.  I felt my 15.1hh mare grow another inch.  She still had forward motion but she could see the water shooting out above the corn field.  At first I tried to move her to the other side of the road so that it was out of her line of vision but she didn’t think that was a good idea.  As long as her feet were moving, we were going to be fine.  I tried to collect her but she had nothing doing with that, she kept her eyes pinned on that sprinkler.

And then her feet quit moving.  She locked up.

Now I’ve learned in my years of riding that I perhaps don’t have all the skills I need to handle everything that a horse can possibly do to the rider.  There is very little Windy does that scares me and I know her well enough that I can usually get us both out of a situation.  Where I used to quickly dismount, I most often can handle her from the saddle if the situation gets uncomfortable and this didn’t seem like one that was going south particularly.

But I still kept an eye out for the softest place to land.

The goal here was to get her feet moving again.  But she would not proceed.  To turn her left – toward the pivot – would have been the smart thing to do as she could have kept her eye on it, but thinking only of myself, if there were to be a situation, that leaves us on gravel.  Road rash does not become me. 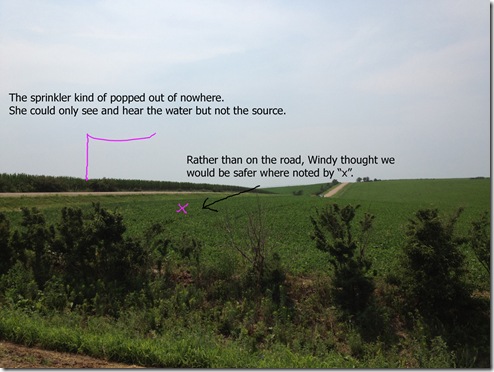 Although I hesitated on asking her to go right – away from the dinosaur spitting venom – it would take us to the soft grass on the side of the road and the beanfield beyond.  I decided to take that option and she liked it. 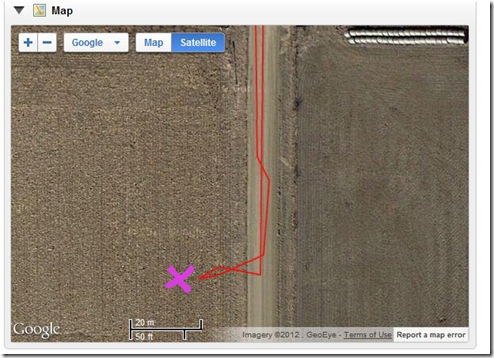 (GPS tracks that show our off road adventure today) 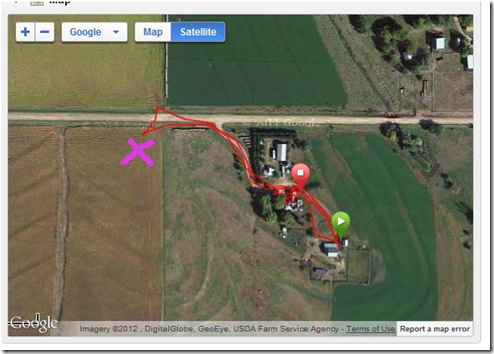 Reminiscent of my ride and subsequent parting of ways on Fancy on a frozen beanfield last January, I found myself in the same situation.  And yes, one rein stops are your friend.  But I caution that while they can stop forward motion, it doesn’t necessarily stop all motion and when horse and rider are a gear higher than norm, they are probably not implementing the procedure as one would do under the watchful eye of a trainer in a controlled environment.

But I did get her stopped and luckily did NOT find myself sprawled out among the beans this time.  I quickly dismounted.  I felt really small as I walked her out of the beanfield as I am sure she had grown to a good 17 hh now as she knew the dinosaur was still there.  But as we started to walk away from it, she started to relax.  We stopped and I fed her some mulberries and when she shrunk enough for me to mount, I did and we went on home.

This is our 8th year on the trail together.  Windy is not spooky by nature although things bug her like piles of weeds the road grader leaves behind that wasn’t there the day before or wagons that sneak up behind her or donkeys that unexpectedly bray in her face.  But most of the time after she gets a good look at these things, they are a non-issue.  She couldn’t get a close enough look at the pivot to really understand what it was; a better rider probably would have worked her through it differently.  But then they wouldn’t have had as good of a story to tell.