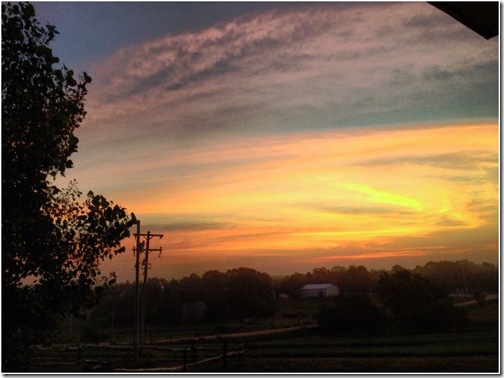 Madeline, my senior spring spaniel, woke me this morning around the time I normally get up.  She didn’t want to sleep in; it was time.  I only cussed her momentarily because when I swung out of bed I caught a glimpse of the sunrise that I would have missed had nature not been calling for Maddie.  I took a few shots with my iPhone Instagram app and although all the photos captured the magnificent colors, I liked everything about this particular picture above:  the notch in the top right hand corner is the porch roof, the “fort” pasture with fencing made of cedar tree trunks just under the power poles.   I caught a glimpse of the cottonwood tree to the left and the gravel road going down the hill kind of lights up.  I probably won’t go out and have this picture blown up and framed, but definitely Facebook-worthy.

My Facebook friends are so kind.  There were a lot of “likes” and many positive comments.  One person mentioned if I removed the power poles from the picture, it would “be a classic.”  I didn’t take that as a backhanded compliment because I agree, that in many cases, power poles can “pollute” a picture.    Believe me, there are times I am taking pictures that I am trying to avoid them or dumpsters or my big pet peeve, a picture taken with people around the table with half-eaten food and empty bottles.  (Shudders!)  But in this picture, the power poles didn’t bother me.  It captured what is the rural morning from my front porch. 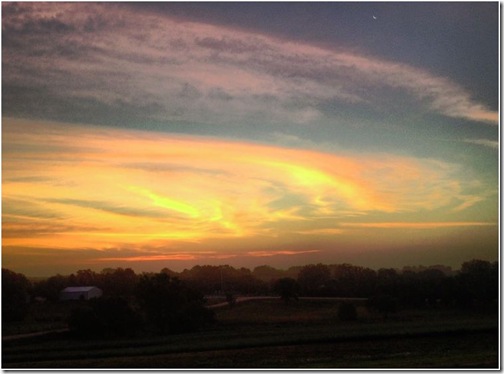 I looked back at those pictures for one taken this morning that did NOT include the power lines and it is shown above.  I didn’t notice until now that I caught the waning crescent moon at the top of the picture off to the right.  The sky is also brilliant; perhaps captured even more in this shot than the other.  And the highway lights up down yonder.  It’s a nice picture, too.  But I still like the first one better. 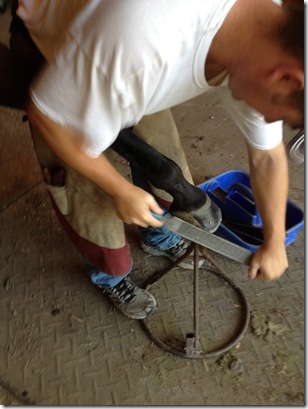 This weekend, I had the horses shod for our upcoming trip.  I measured and ordered the Plastic Horseshoes (www.plastichorseshoes.com).  They are made of polyurethane and there is some flex to them.  I have been wanting to try them and granted, it may not have been the wisest choice to try something new right before vacation but sometimes I don’t think before I do. 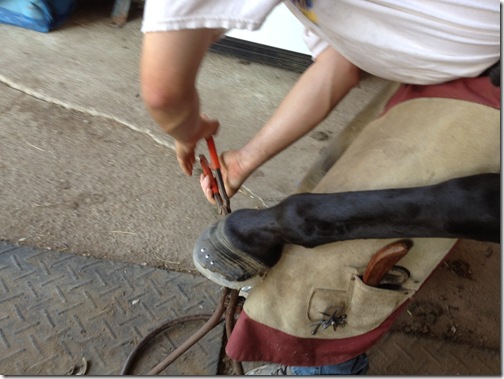 I had measured both Windy and Fancy’s feet as per the instructions.  But I really think it is hard to get a good size.  Dan, my farrier, chose the larger of the set for Windy but still had to cut a lot off.  It took him probably 3 times longer to put on than it would a traditional shoe – mainly just trying to get a good fit. 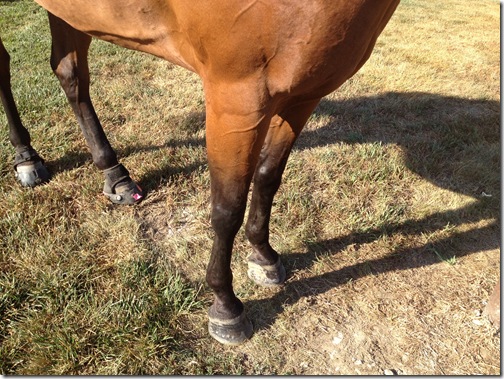 I like that there is some give to them.  I like that they might provide a little more traction than metal shoes.  I like that they cover most of the sole of the foot but I do worry about dirt and mud packing up under it.  I also worry about her overreaching – there is nothing to prevent if from pulling other than the give to the plastic.  The nails seem a long way away from the back of the foot.   I really, really want to like these shoes.  I’ll let you know in a month if my worries were warranted.  (Note:  Windy does not have sufficient hoofwall to successfully wear shoes on the back.  I have her feet trimmed so that Easy Boot Gloves will fit her hind feet should I get in areas that I think she needs hoof protection.) 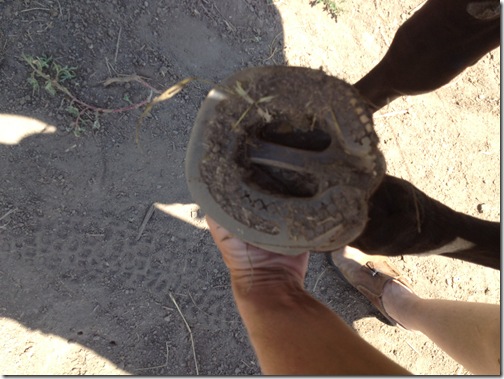 I forgot to take a picture of the bottom of the shoe until she had been back home in the corral for awhile.  But this gives you a pretty good idea.  We’ll see how it goes. 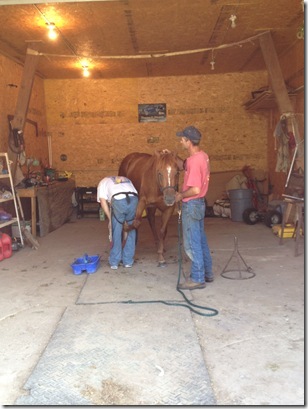 The plastic shoes I ordered for Fancy would not work.  She has a smaller hoof than Windy and although I ordered a size down, it was still not small enough.  So we just went with traditional shoeing for her. 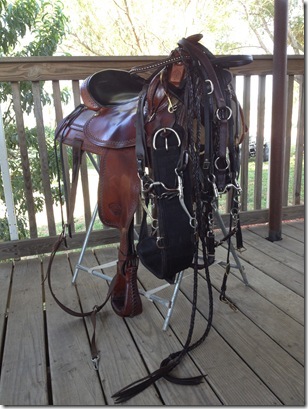 Spent today cleaning tack.  I love how it looks, feels and smells after a little (a lot) of elbow grease.

No riding this weekend.  The heat wave returnth…