Then there is the boring stuff.  Really, getting the horses ready for a trip is much more exciting than getting ourselves ready.  Packing clothes for temperatures ranging from 45 – 85 degrees, packing food for two people but in true camp fashion, sharing with our friends and we always pack too much.  Making sure we have enough propane, paper plates, trash bags and all that jazz.  Really, I try to get the trailer ready at the beginning of the season when I am still excited about getting the trailer ready.  Then when I have to pack for a trip like this, it is only filling in what I am missing. 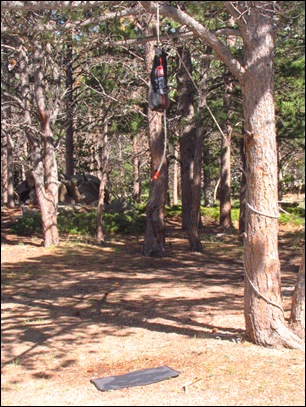 Addressing Mindy’s concern (in the comments on the prior Traveling with Horses post), a daily shower would be nice.  Our old trailer had a shower and a water heater.  And I hate to admit this, but it didn’t get used that much.  I just take on a cowboy state-of-mind when hanging out in the wilderness.  I do have a sink with running water in my trailer for washing up and would do the morning sponge bath and head wash just to revive myself.  And if the sun was shining, our solar bag would warm up nicely and we could have a “real” shower under the tree.  Swimsuits optional. 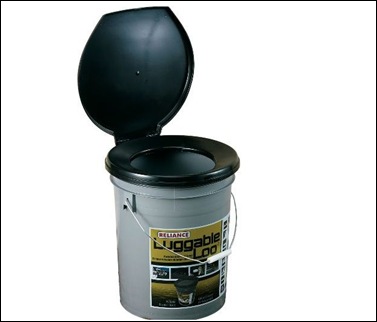 Our trailer does not have a bathroom but I have a Luggable Loo.  It comes with liners and I use shavings in it that I use in the trailer for the horses.  I keep it in the back part of the trailer where the horses travel, after cleaning it out of course.  I put down rugs and have a little night light.  No, not the Ritz but better than the woods.

Planning food for a week can be a challenge but since the kids no longer camp with us, I have to say, it is a lot easier.  I am not a big snacker so I just plan meals.  John can bring his own junk food. 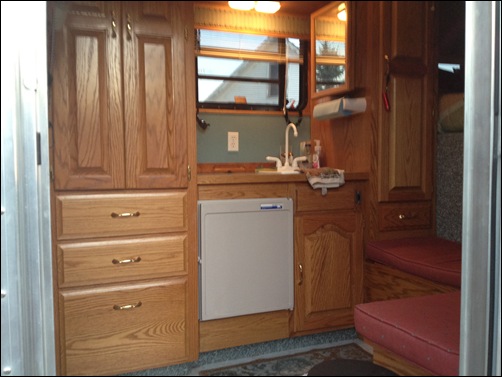 I do have a refrigerator in my trailer which runs on propane but it is not big enough to hold a week’s worth of food.  I buy salads at the deli to store in here as well as butter, mayo, etc.  I also try to save room for dinner leftovers because that is a lot of times lunch the next day.

I freeze as much of the meat as I can before we leave and do not pack it until the morning we depart.  My meat cooler is my “do not open” cooler.  I do not put pop or anything else in it so that it is only opened once or twice a day when a meal is being prepared.  I have a coffee can that I filled with water and froze and it goes in the cooler that way with the lid on.  That way I don’t have water in the cooler.  I also freeze water bottles and put them in this cooler as well as artificial ice.  By week’s end, some of the water bottles still showed some evidence of ice.  You wouldn’t be able to go much longer than a week this way.

We keep drinks in ice coolers and yes, do make ice runs if we are close enough to town to do so.  John said someone should start a business of driving through campgrounds with an ice truck every day. 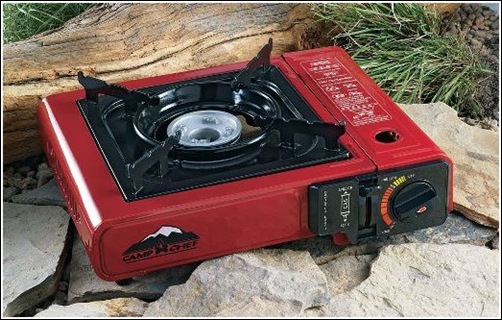 There were no open fires or charcoal grills allowed at Medicine Bow due to the drought.  You were only allowed to use gas grills, stoves or burners.  We took our propane grill and our butane burner.  This little burner is great for fixing coffee in the morning or warming up a side dish.  I found they don’t carry butane in the obvious places like Walmart but you can order it through Cabelas.  We have a similar burner which uses propane, but this one is very handy. 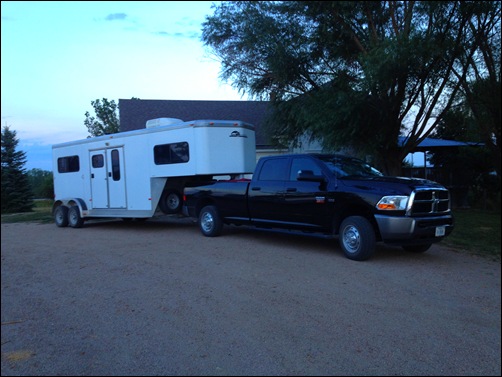 In our trailer, we keep our lawn chairs and tables.  We brought along saddle stands since our tack room was full of hay.  With the trailer packed and hooked to the truck, we fueled up the night before and then drove over the scale at the local elevator to get our weight.  After numerous breakdowns over the years, even having to ride Windy home twice last year, I finally bought a new truck this past winter and this was the first time we were really fully loaded for a long trip.  The empty weight of the truck and trailer with no tack, hay or horses is 12,700 lbs. (trailer only 4,300 lbs).   With everything packed except the coolers and horses, the entire rig weighed 14,520 lbs.  Loading horses, we would weigh in around 16,500 lbs.

The GCWR for my Ram 2500 Heavy Duty truck is 18,500 lbs., so I had about a  ton to spare.  It is important to know what the GCWR is for your truck.  That is the total weight of your truck and your trailer.  I think we pushed it over the limit too much with our last truck and trailer which probably contributed to my prior truck problems.   When I was truck shopping this time, I thought maybe I could get by with a 1/2 ton but doing my homework and considering the kind of travel we do, it would not have been an option.  Study the GCWR very carefully when making a purchase – don’t just listen to a salesman, they like to sell those 1/2 tons - and know what your total rig weighs when fully loaded.

I didn’t go with a diesel engine this time because a majority of my driving is on flatlands and torque is not as important.  The price for a diesel engine and associated service and the cost per gallon of diesel fuel compared to gas steered me toward the hemi.  I know I would get better mileage with the diesel and it would probably outlast this truck, but all things considered, including what I wanted to spend and how long I typically keep a vehicle, I am satisfied with my purchase.

Even having a new truck, it is important to belong to a motor club such as US Rider or at the very least, carry along a jumper cable.  You never know when something might suck down your battery or what other problems you could have when towing.

So that’s it.  That’s how we roll.  Others may do it different and have even better tips to share.

Have horses?  Travel!  What a way to see the country.