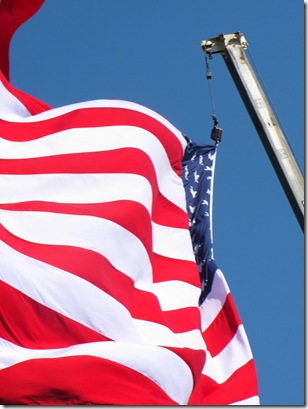 In the morning, I went and fetched Windy from the pasture.  It was already starting to get uncomfortably hot and I wanted to get her groomed and dried.  I lightly shampooed her coat; disappointed that her rich color is starting to fade.  That happens mid-summer and I won’t see it return until her winter coat starts to thicken up.  After conditioning her mane and tail, I combed them out; they dried in the hot wind almost immediately.  I put her in the round pen, which is grass, as I knew she would roll.  She did.  Then combed her mane again and put it in a long braid.  She was ready.  My friend, Mike, picked us up a little after 1 and we drove to York for the funeral procession of Lance Corporal Hunter Hogan. 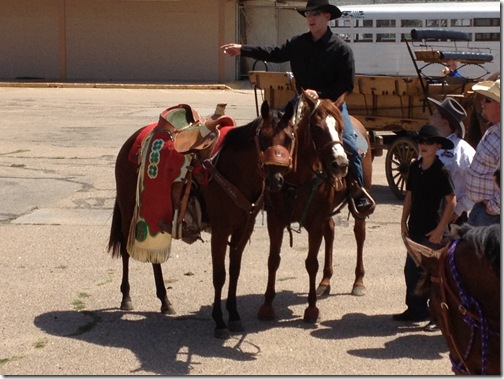 There ended up being about thirty riders, give or take.  Not as many as they hoped, but with temperatures nearing 100, I was not surprised.  After a brief meeting about the expectations, we rode over to the church where the service was still taking place.  The Riderless Horse carried the rodeo gear of Lance Cpl. Hogan. 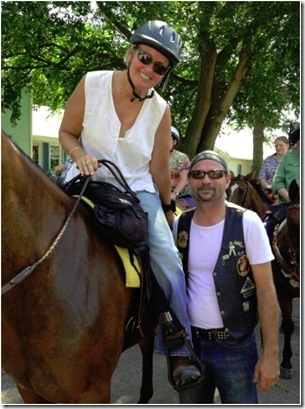 The Patriot Guard were already there; we waited in the shade along the road.  These men and women, many of them veterans themselves, continue to carry on this tradition.  Please link over to their webpage and read their mission statement.  I was privileged to be among them. 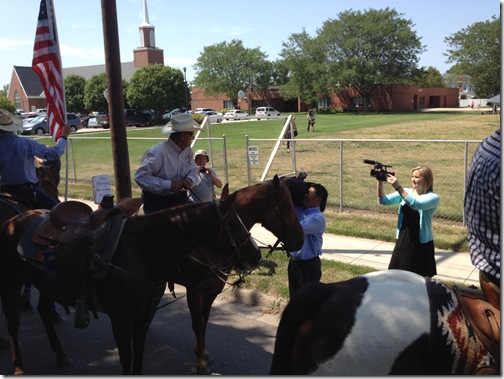 The news crews from several television stations and newspapers were there, too. 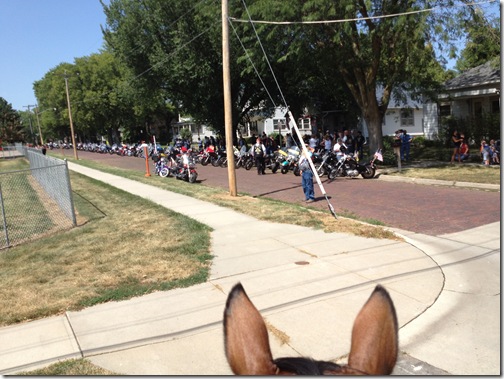 The Patriot Guard soon fired up their engines and the 200 bikes made their way out to the cemetery; they would be waiting there to begin the graveside services.  I thought about dismounting when I heard the first Harley, but Windy didn’t seem to notice, so I didn’t.  The bikes moved away from us and the horses didn’t pay any mind. 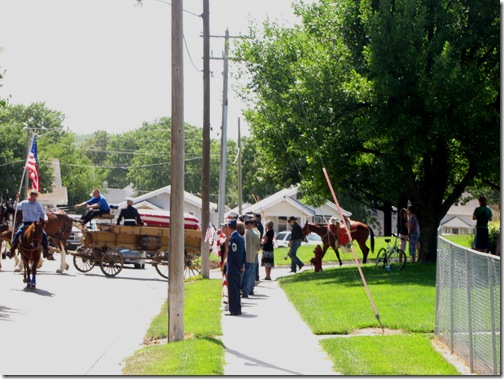 The caisson driven by a team of Clydesdales picked up the casket carried by the Marines.  From what I could see, one Marine accompanied the fallen and the others loaded up in SUVs and drove to the cemetery.  Those of us riding horses were the escorts and we followed a police cruiser down the city streets and out into the rural area where he would be laid to rest. 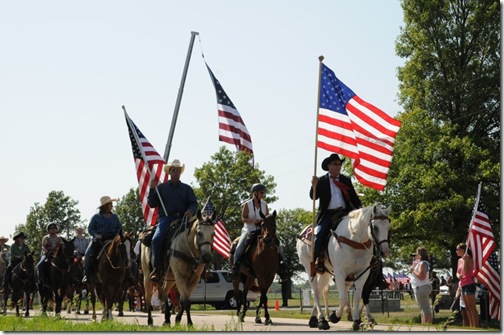 I am inserting pictures in this post so you can see what I saw along the way.  Its hard to find the words to express how I felt.  Honored, proud, sad…  lots of emotions.  People along the way would mouth “thank you” as we rode by.  I’d smile and tell them “thank you”, too, as they were paying tribute, too, standing on the roadside honoring this young man they, too, didn’t know. 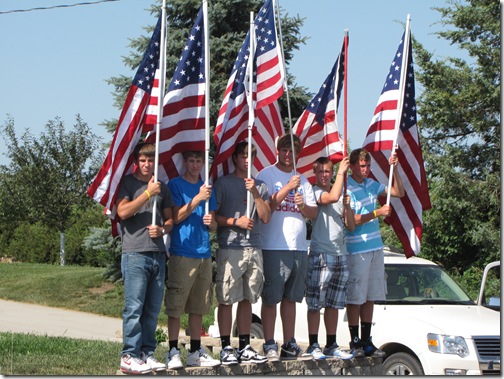 Do the young men in the picture above not take your breath away?  They are wise beyond their years. 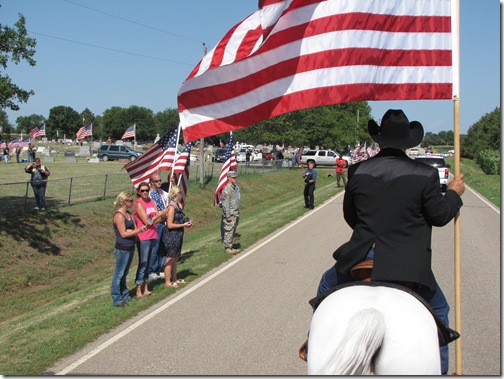 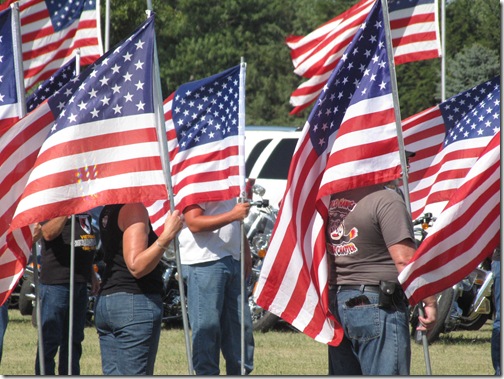 I can’t tell you how many flags I saw this day; more than I’ve seen in my life. I can’t explain how they made me feel.  Once again, honored, proud, sad?  All of the above.  Perhaps because of what they represented on this day. 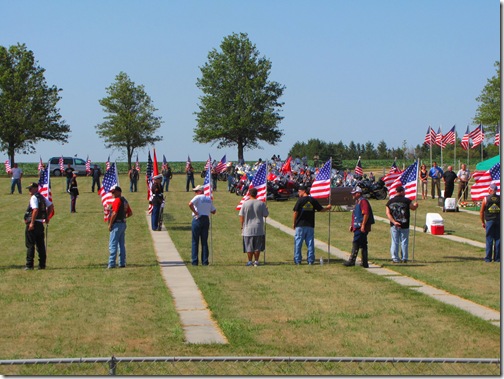 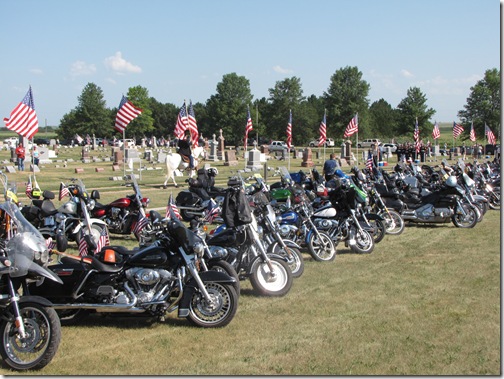 As we got closer to the cemetery, we could see the bikes of the Patriot Guard, all the riders standing near, holding American flags.  Did I mention there were so many flags. 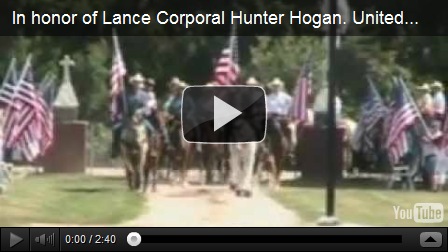 This video was taken by Hannah Birt and posted on Facebook.  It was a little shaky as she steadied her camera but does level out.  I am following the buckskin horse with the flag, wearing a white sleeveless blouse and yes, wearing my helmet. 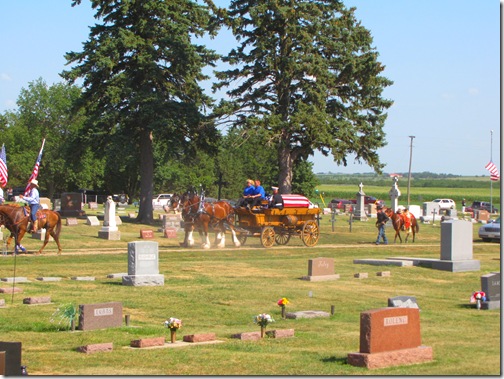 The riders circled the burial site and then stopped to watch as the caisson and the riderless horse were escorted to where the family waits.  I was told that when the call for riders was broadcast locally, this driver team came forward and asked if they could carry the soldier to his resting place. 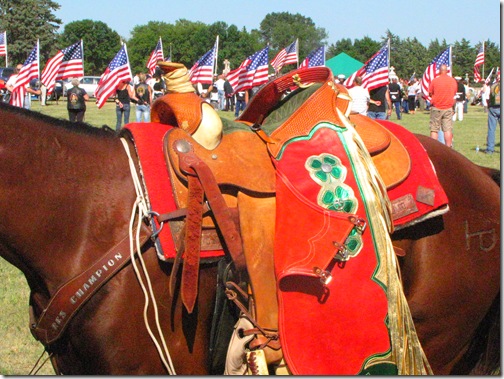 The Riderless Horse was lead by the best friend of the deceased, his chaps laid across the saddle, his boots in the stirrups.  I was initially told the horse did not belong to Lance Cpl. Hogan, but someone else believed it was his horse.  Either way, it was a touching tribute. 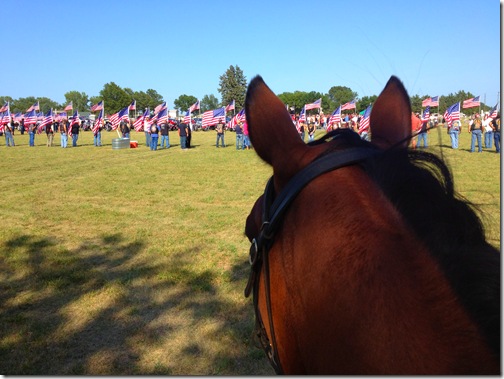 As we entered the cemetery, it was very quiet except for one bell that would toll.  The core group of riders were asked to ride to the other side of the Patriot Guard; a nice place in the shade. 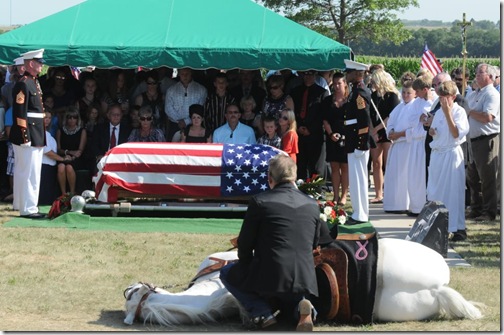 The gentleman on the white horse is Taylor Rudd from Lubbock, Texas.  He is retired and volunteers his time to honor fallen serviceman.  He and his horse, named appropriately The White Horse honor the dead by laying down at the burial.  We couldn’t hear the words and I couldn’t get a good picture, but the one above was taken by an area newspaper. 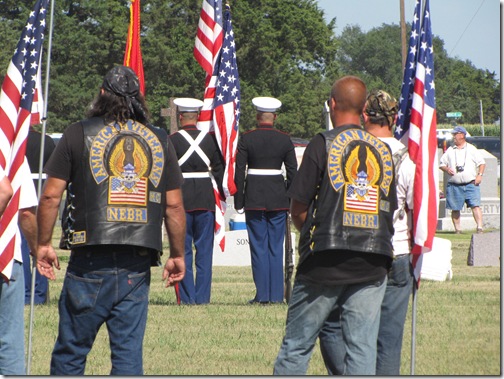 There was a 21-gun salute and a plane flew over.  The service ended shortly afterwards. 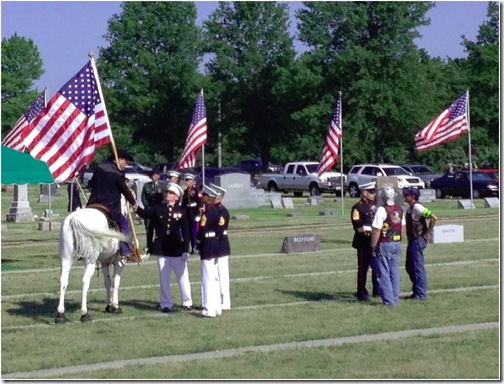 We watered the horses from one of the many water tanks left in the cemetery for our purpose.  The water was cold and fresh and welcome.  I scanned the crowds leaving; many of the bikers starting their engines and drove away while others shook the hands of our Marines who were proudly represented this day.  Thanking them is not enough. 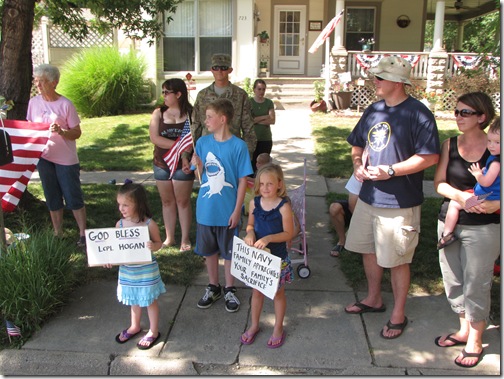 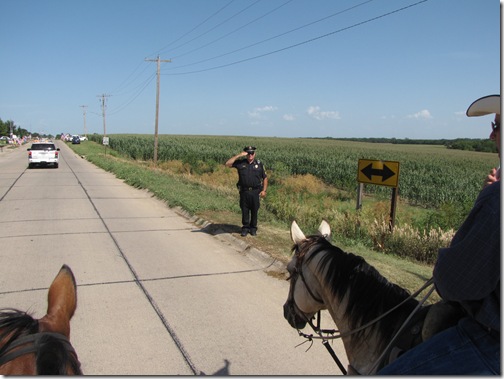 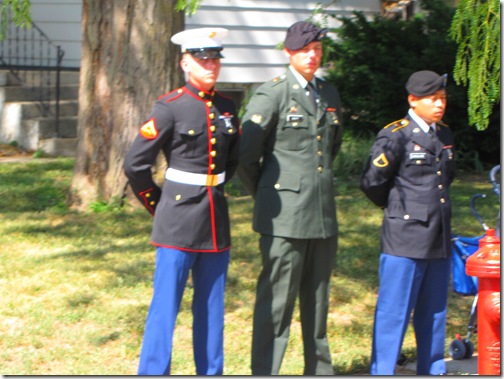 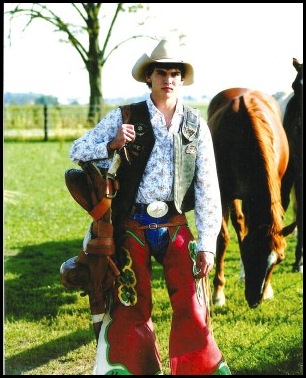 It was our way of saying thank you to one person, Lance Corporal Hunter Hogan, who most of us had never heard of one week ago today.  It was our thank you to him for dying for our country.