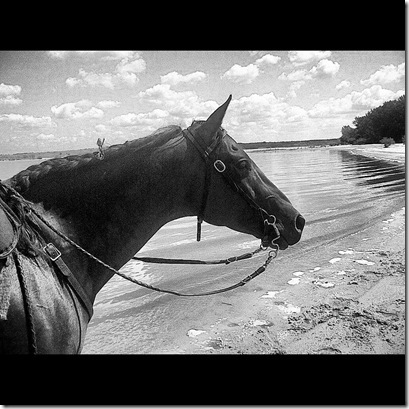 I’ll put braids in her mane to keep her neck cool, like we do when we compete in CTR.  She’ll wear her lightweight black saddle with the yellow-gold show pad.  It will be cooler than her trail saddle and thick pad.  The black and gold against her mahogany bay coat will look very sharp.

As requested, I’ll go in as “western attire” as I can get.  My style has always been rather eclectic; Ariat terrains with western spurs, a pair of Case’s light cotton jeans because they will be cooler than those of mine with spandex.  In my closet, I found a white sleeveless button-up blouse with an embroidered yoke.  I don’t think anyone will mind that I wear a helmet instead of a cowboy hat.  He wore one, too.

Tomorrow they are burying Lance Corporal Hunter Hogan, a 21-year-old Marine that was killed in Afghanistan on Saturday, June 23rd.  He had Nebraska roots and he was a cowboy.   Organizers have asked that horse and riders – as many as can come – accompany him to his final resting place.  I didn’t know him or his family but I am honored to be asked.

The soaring temperatures waned my enthusiasm; heat indexes predicted to be 103 or more.  But then I remembered that this is a small sacrifice for such a big one.  My horse is well conditioned; she is parade ready.  We will escort him home.  My dad would be proud.