And Then She Bucked Me Off!

I used this title on the last two posts and then changed it before publishing because I never got to this story.  There was just so many other things I wanted to share.  Having an opportunity to go through my pictures and present them here has been like showing off vacation pictures to a captive audience.  But most of all, I enjoyed reliving them. 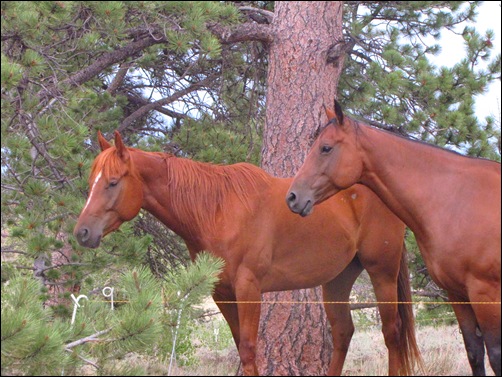 On Friday morning, John fixed an early breakfast.  We still had so much food left over from the week and there is nothing like bacon when you are camping.  After breakfast we fetched the horses to head out for a morning ride.  When I saddled up Windy, I could tell she was still listening for the horses she knew were out there but couldn't see. 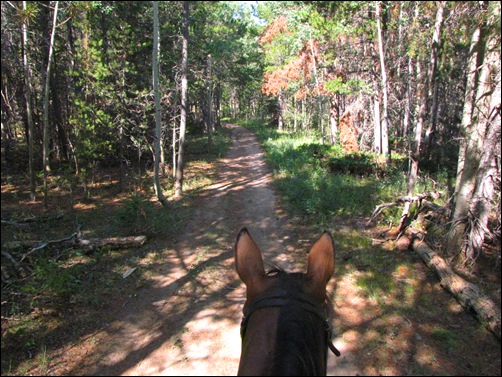 Since we inadvertently climbed the mountain the night before and would be leaving the next day for the long trip home, we decided to stay in the lowlands and give the horses a much needed break.  Perhaps we would go moose hunting in the aspens?  Do moose travel far?  As I lead out on Windy, she was pre-occupied.  She was sure we should go in the other direction to where she heard the other horses.  I told John she was quite pissy and “would probably throw my ass today.” 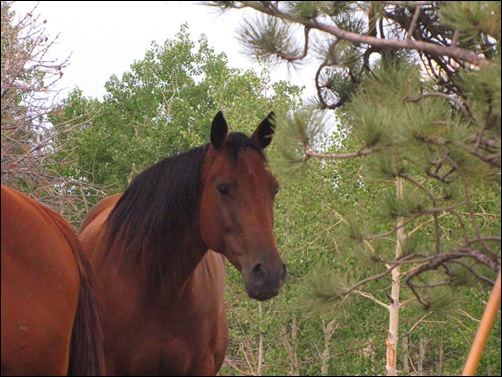 I’ve been riding Windy for eight seasons now and really, I can only remember one time that I involuntarily came off her.  That time, some donkeys in a pasture next to the trail came up to the fence as we passed by.  No one thought there would be a problem until one brayed in the face of our horses.  I swear to God that Ginger sat down!  Windy took the lead from her mama and did a squat and spin and I found myself standing on the ground while she high tailed it down the trail.  I literally went off her backend.  When she realized she was flying solo, she stopped and looked back.  Seeing me standing there, she came trotting back as if to say, “let’s go, come on!”  I’ve done some stop and drops on her when I got unseated and knew I couldn’t right myself and slid down as a save.  But that is really the only time I recall that she “threw me.” 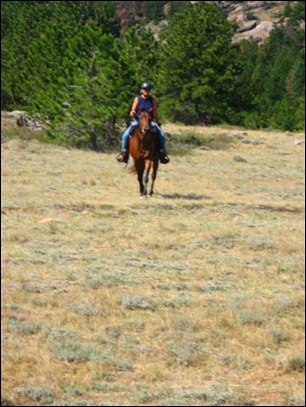 So we work our way over to the trail that starts to go up a little hill.  She is a bit sticky footed so I thought perhaps if we loped up this hill, she would move out better.  I kissed her into the lope and she didn’t go.  If I gently pop her with the end of my reins and she will usually reward me with a slight crow-hop to tell me that she didn’t like that but then will lope out.  This time after the crow-hop, she didn’t level out.  Instead, she did it again.  And again.  John said we parted ways on the third buck.  He also said I didn’t try to save myself; I wasn’t even hanging on.  Well I wouldn’t be – she usually doesn’t go for two let alone three!  As predicted, I landed on my ass on the trail next to her.  She stopped and looked at me as if to say, “Wasn’t my fault! You should have hung on!” 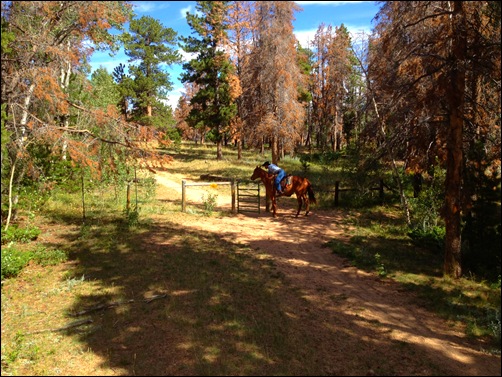 We rode about ten miles that day but both of us could tell the horses were done.  They had been going for seven days straight and covered over 80 miles.  Although holding up well, they are flatlanders.  They were tired.  We put them up when we got back to camp and as we had lunch, decided we may as well break camp and put a few miles behind us so the horses didn’t have such a long day in the trailer on Saturday. 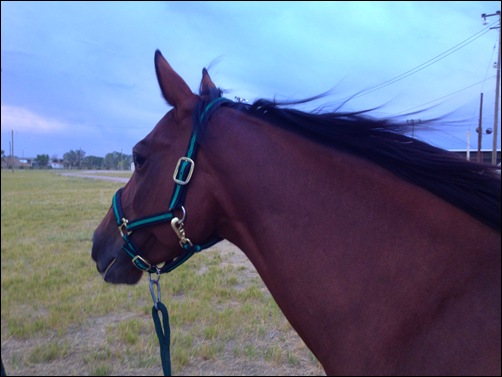 We drove about 170 miles that afternoon to Julesburg, Colorado.  I had found they had a fairground and was very close to the interstate.  We visited with some volunteers about stabling for the night and put the mares in a nice big, fenced pasture while we pulled out our lawn chairs and watched them roll and run and watch whatever they saw in the distance. 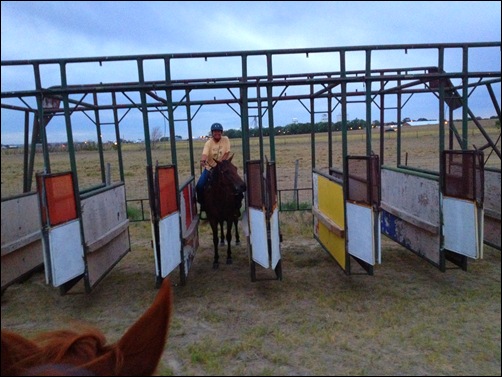 Right before dusk, we saddled them up and rode around the fairgrounds.  They must do some sort of quarter horse racing there as we found the gate at the end of what looked like a track.  We rode by the pig barn and the arena as the sun set.  We put the mares up and went to bed.  The next day we loaded up early and hustled across the state.  The temperature in Nebraska was in the high nineties again and the sooner we could get the horses home and out of the trailer, the better.  We pulled into our yard a little after noon. 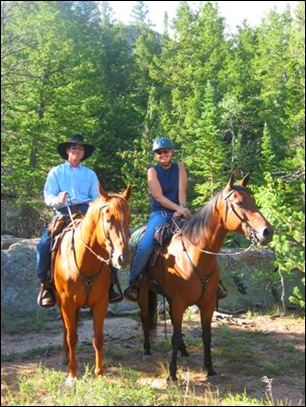 I mentioned here or to friends, don’t recall for sure, that the trip was wonderful, but bittersweet because our boys weren’t with us.  A sure sign that they are growing up and with other interests.  But on the flip side, it was good for John and I to do something together that we like to do without the stress of parenting all week.  It had been years since we could escape like this and we were due time.


It was also the first big trip we took since Ginger died.  I thought about her a lot and missed her more. 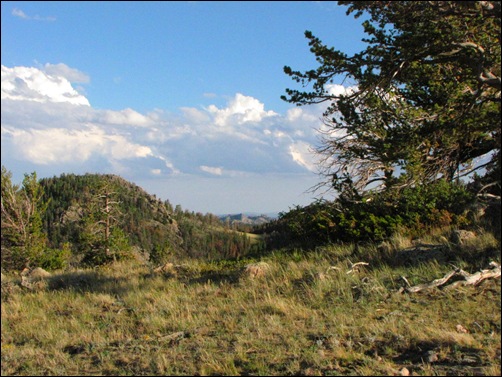 Song of Wyoming
Well, I’m weary and tired, I’ve done my days ridin
Nighttime is rollin my way
The sky’s all on fire and the lights slowly fading
Peaceful and still ends the day
Out on the trail night birds are callin
Singin their wild melody
Down in the canyon cottonwood whispers
A Song of Wyoming for me
Well, I’ve wandered around the town and the city
Tried to figure the how and the why
Well, I’ve stopped all my schemin
I’m just driftin and dreamin
Watching the river roll by
Here comes that big ole prairie moon risin
Shinin down bright as can be
Up on the hill there’s a coyote singin
A Song of Wyoming for me
Now its whiskey and tobacco and bitter black coffee
A lonesome old dogie am I
But wakin up on the range
Lord I feel like an angel
Free like I almost could fly
Drift like a cloud out over the badlands
Sing like a bird in the tree
The wind in the sage sounds like heaven singin
A Song of Wyoming for me
A Song of Wyoming for me
~~~~~~~
.
- August 09, 2012