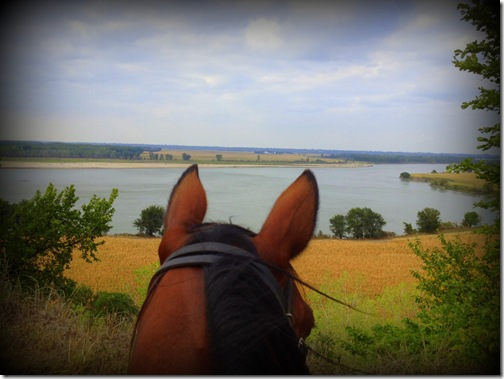 I just came home from a lovely mid-week ride at Turkey Creek Ranch near Newcastle, Nebraska.  A couple hour drive north of me, Turkey Creek is nestled on the Nebraska side of the South Dakota/Nebraska border.  I've tried to visit at least once a season, never tiring of the outstanding views of the tri-state region and the mighty Missouri River. 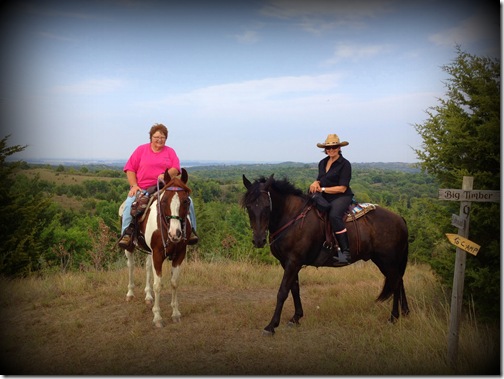 I traveled up by myself and met my friends Kathy and Trudy, who had arrived a day earlier.  Dare I say how much easier it is traveling solo with just one horse?  I stopped at the HyVee deli before I left and picked up some healthy food choices for myself (Gasp!  Healthy food & camping?  Who’d of thunk?), grabbed a bale of hay for Windy (well, two bales -- just in case I convinced myself I needed another day at Turkey Creek),  a change of clothes, and my boots.  With Pandora on the iPhone (until I lost connection in the boondocks), it was an easy drive. 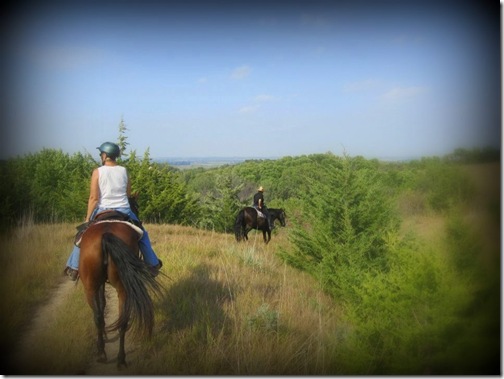 I have been reading the book But It Wasn't The Horse's Fault written by famed endurance rider, Julie Suhr.  In the chapter, My Flighty Fanny, she talks of falling off horses from the time she started riding until it wasn't fun anymore.  She then mentioned making a conscious decision not to ride a horse beyond a trot; that her galloping days were over.  And she didn't.  That is until the right horse came along.  Which reminded me of myself while at Turkey Creek.

When I got Windy back in 2005, I made the decision that she was "the one".  We bred her mama, she was foaled on our place... besides having a brain fart and accidently selling her, it all ended well when she came back to me.  And as I mentioned in the post about My Dream Horse, I was going to do right by her by having her trained and really learning to ride.  She is the first horse that I have owned that I can ride off the property alone without fear or anxiety or trouble.  I can haul her anywhere and pretty much ride her anyplace.  Our only angst comes from wagons, buggies and mules.  And now pivot irrigation, it would seem.  But all manageable. 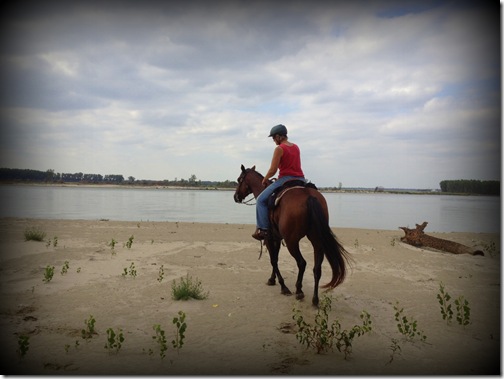 I have ridden Windy alone on a nearby trail but very seldom haul out to ride solo; usually I meet up with friends.  So when Trudy and Kathy planned to leave after our morning ride on Friday, I wasn't concerned about staying a little longer and having that last ride; just Windy and me, one hundred miles from home.

As I saddled up after lunch, a group of women arrived from Minnesota with the owner of Turkey Creek, Brenda, following to check them in.  I've known Brenda for years and after she finished the paperwork for the new campers, I told her I planned to ride and asked if she wanted to join me. She said she would head back home to get her horse and would meet me in the woods.  That gave me a little time to head over to one of the trails behind camp, do a big loop and then ride over to meet Brenda. 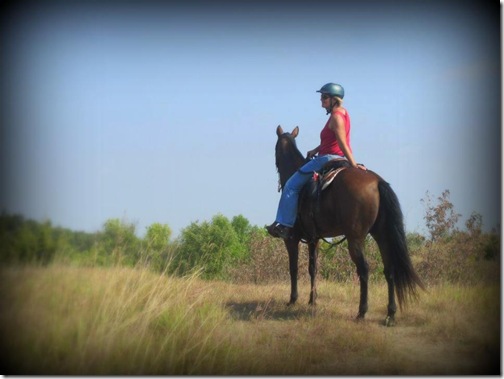 I put my helmet on and positioned Windy next to a small stump to mount.  With the camp now busy with other horses and women, I was so hoping Windy would stand quietly for mounting, walk out nicely and not make a fool out of me.  She was picture perfect as I swung a leg over, waiting for me to ask her to move toward the trail.  She glanced at the other horses briefly and headed where I pointed her.  I have to tell you, I felt pretty darn cool on my pretty mare.  I bet those girls were Impressed.  Even more so when I glanced down and noticed my reins were criss-crossed underneath her head.  I quickly leaned down and tried to make a quick fix without being noticed, only to criss-cross them another time. Oh for goodness sake!  One more try and thankfully I got them untangled without having to dismount.  What an amateur! 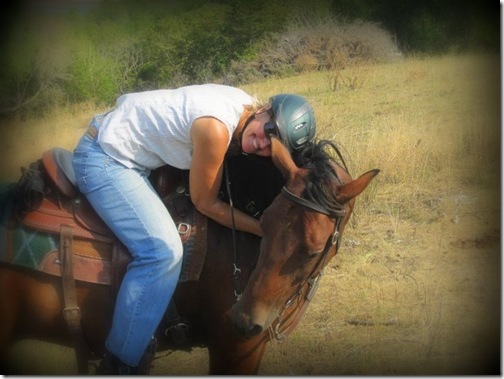 With our tack all sorted out, we continued to ride away from camp and cross the bridge.  I moved her into a nice trot and before long we were loping along the trails of Turkey Creek, just my mare and me.  Julie Suhr, in her book, said after galloping her horse Bravo for the first time, "I was Rocky at the top of the steps in Philadelphia.  I was Neil Armstrong landing on the moon taking that 'one giant step'."  And then, including a quote from Doreen Harlow, she wrote:  "My arms wrapped around Bravo's thin neck and I thanked him for making me 'bigger, stronger, prettier, faster, braver' ."   Yes, Julie.  I can so relate.  Bravo!