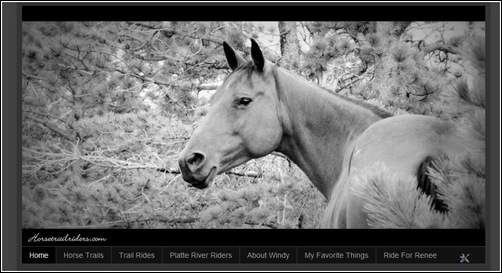 I don’t normally choose dark colors for the background of my blog because I don’t like reading “print” that is typed in white.  It always hurts my eyes.  But I do like to change up the look of my page occasionally and really liked this gray on gray.  I played around with the font to make it a little easier on the eyes; it is on mine so I hope it is on yours.  But I still didn’t like something about it and finally today it hit me.  Windy needed to be black and white, not color.  I think I like that better.  But I have to look at it a few more days to make sure.  Maybe I’ll just blow the whole gray on gray look and start over! 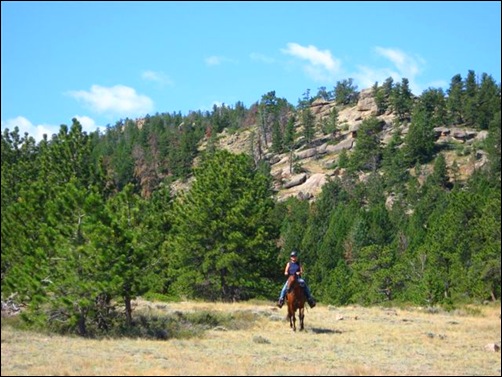 Back to Wyoming.  Wow.  I’ve been home a week; I’ve worked a week!  But my mind is still in Wyoming.  Where did I leave off? 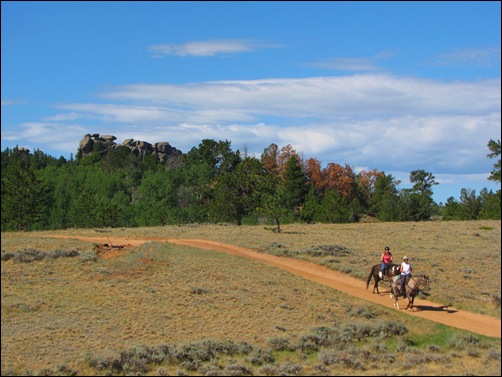 Rather than do day long rides, I prefer to ride out in the morning for a longer ride and then let the horses have down time in the afternoon and get a shorter ride in before sundown.  This seemed to be working.  One morning we left before breakfast and planned to be back from brunch, but it was long after lunch when we returned so the next morning we ate before we rode out.  A couple of evenings it rained, but we still got more than enough riding in. 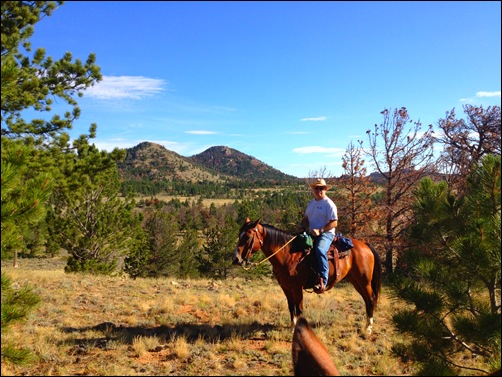 A dehydrated biker stopped at our camp one day to ask for some water.  He underestimated his ride and ran out of fluids.  As we filled his pack, we quizzed him on where to ride and he mentioned the Twin Mountains had nice trails.  He motioned in the general area and Jules and I saw what could be “twin” mountains so made that the next destination. 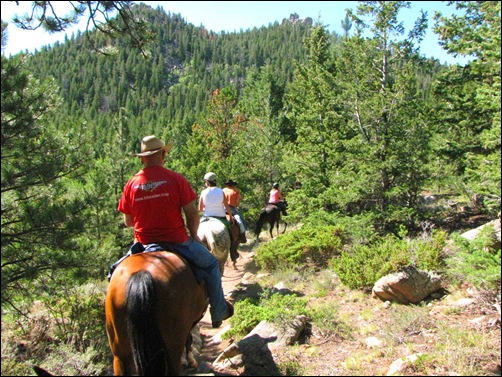 The next morning, we followed some jeep trails up along the side of the mountain but they would eventually peter out.  We couldn’t find anything that looked like a bike or horse trail.  We’d go up and come back down.  Not that it wasn’t an interesting ride; any new ride is a nice ride, but we hoped to find a real trail.  We finally found it and had a nice ride around the base of what we think was the last twin.  It wasn’t as long as we hoped, but will remember it and try again another time. 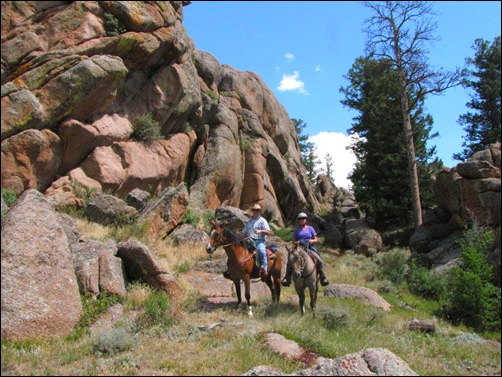 The next day, we trailered over to Vedauwoo Park.  We rode here on our last trip and it was worthy of a return.  This is when I really missed my traveling buddy, Kathy.  She does all the research to find where to go in, where to park and all that jazz and I just follow along.  So we were under my directions this time which pretty much had us on our own.  We did remember from last time that she said horses were NOT allowed in the public camp or parking areas.  We meandered down a dirt road until we found where we believed we parked the last time and saddled up and rode in. 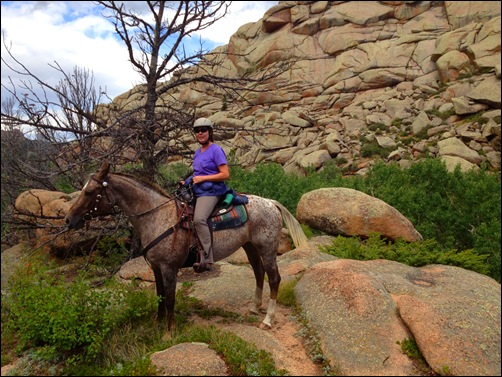 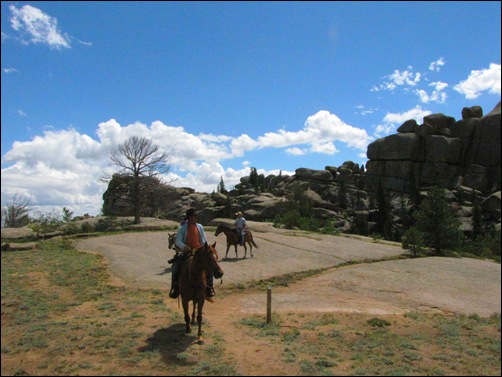 The trails looked the same and they looked different.  It’s hard to remember from two years ago but whether we were seeing them for the first time or a repeat visit, we were overcome with their awesomeness.  (Is that a word?)  How did the rock get like this?  When was the last time they moved?  If a rock moves in the forest does anyone hear it? 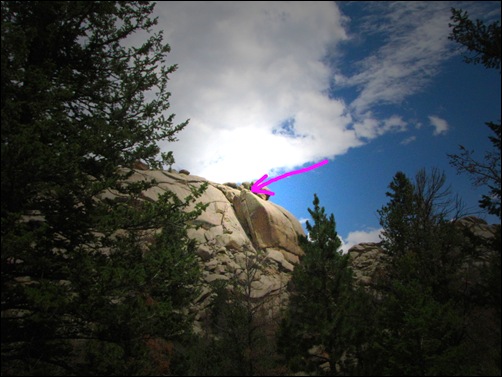 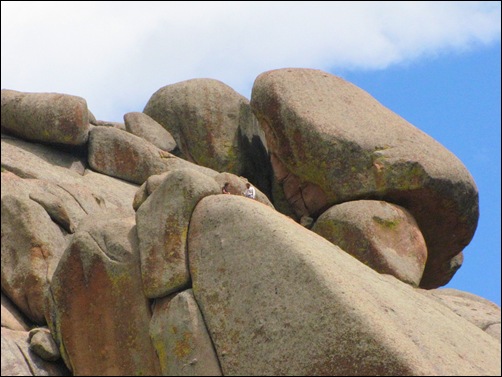 It’s fascinating to watch the rock climbers at Vedauwoo.  Look closely in the pictures above to spot those adrenalin junkies.  Although John has been a steeplejack all his life and is quite used to tower climbing, he did admit it is getting harder and harder for him and a lot more scary.  (I don’t know if I wanted to hear that or not!) 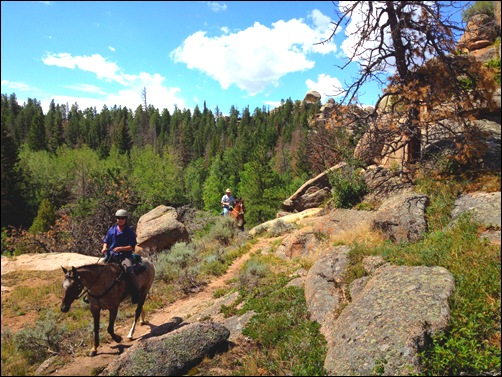 We didn’t see their entire descent as we found ourselves in the area we weren’t suppose to be in …. again.  Luckily for us, two different rangers had spotted us so far and we weren’t thrown out or ticketed.  (Note to Vedauwoo:  Maps would be nice.  : ) 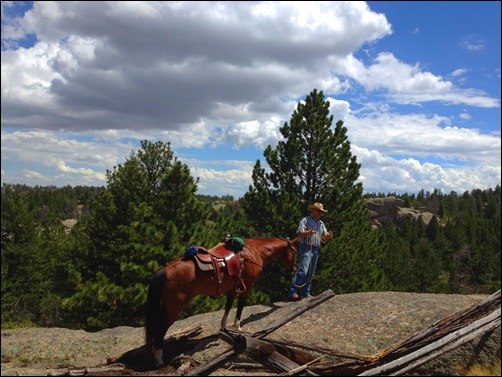 We did manage to get ourselves a little bit lost.  Lets just say I had a GPS error.  If we would have listened to our horses, the ride would have been a few miles shorter. 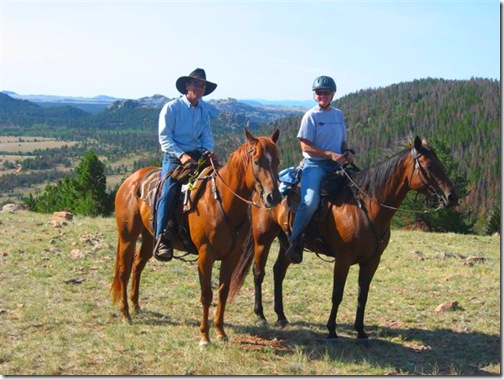 Coming soon:  our last two days.  Are you bored yet?  Golly, I want to go back.