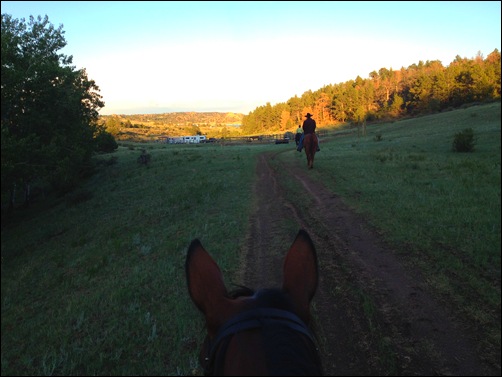 After spending a good part of the day at Vedauwoo Park, we trailered over to Curt Gowdy State Park which was in the same general vicinity as where we had been riding.  Our friends were leaving in the morning and this would give us an opportunity to try a new trail and the equestrian campground with most amenities, including corrals, would give them a faster departure the following day. 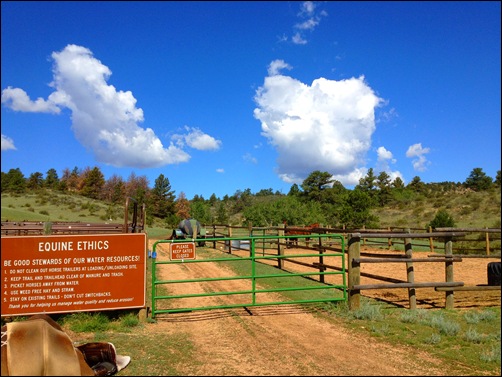 Coming into a modern campground was a bit like coming out of the forest in the movie, The Village.  I wouldn’t say we were necessarily roughing it, but we were back in the woods a bit.  Seeing boats on the lake and registering to camp at a kiosk was a snap back into reality.  While I was feeding the horses, a ranger came to our campground and seeing that we were from out of state, asked if we had traveling papers on our horses.  John told him he was sure we did but he would have to wait until I came back down to camp since I took care of all that.  He told John he would stop back later.  I was so excited!  All my years of traveling across state lines with horses, I have never been asked to show my papers.  Please, someone ask to see them!  He never came back (shrug & rolling my eyes).  No one asked to see my recently certified hay either.  Figures…. After a brief light rain, we saddled up to go explore what we believed to be well marked and mapped trails.  Or so we thought.  Now let me explain.  In the years that we have been riding, I have been in the middle of the trail string or the end.  And I like it that way!  I have never been the guide or the leader or, for heaven sake, the map person.  That was John and Ginger’s job.  Although Fancy does pretty darn well on the trails, she just hasn’t stepped up to being the lead horse yet.  So for this trip, Windy and I lead out most of the time.  And we did alright in Medicine Bow and pretty good at Veduawoo.  How hard can this be here?  We have a map! 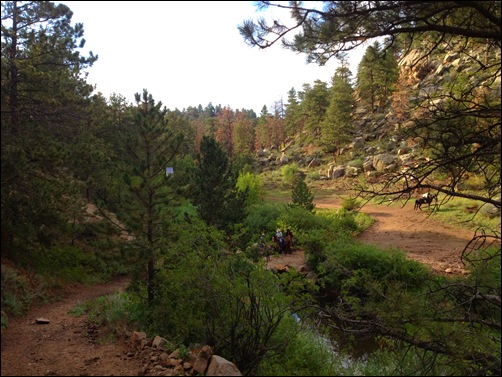 Well, it seems I couldn’t even get us on the right trail out of camp.  It was pretty; but we would probably get spanked if we were caught riding here.  Admittedly, this was day six; I was getting tired of being Chief First-in-Line and apologize to my fellow braves for getting cranky as we retraced our trails from the Stone Temple Circuit Trail (I think) to the Lariat Trail. 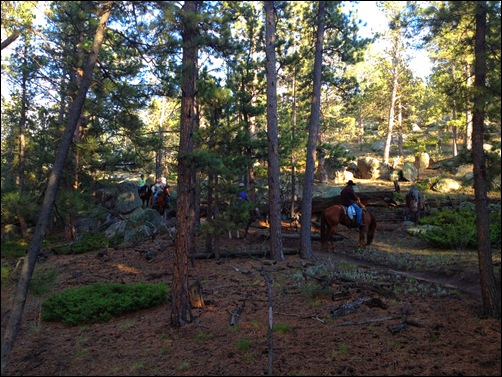 From that point on, the map continued to be passed around among us like a hot potato.  No one wanted to be the one to provide the wrong directions.  How hard can this be?   I will tell you that what we saw of the Curt Gowdy trails was pretty awesome and we may or may not have been on Lariat.  The jury is still out. 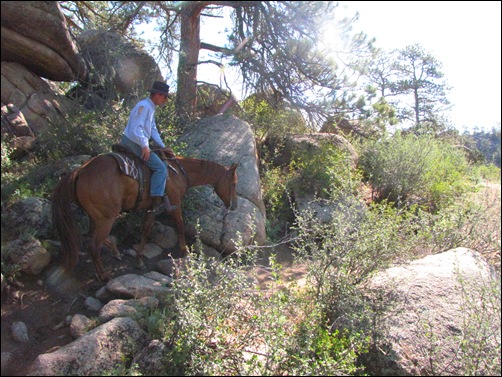 After our friends left the next morning, John and I went back out on the trails and made another loop.  Really, I am a good trail user.  I try to follow maps when they are provided.  I really don’t want to upset the bikers.  But seriously, those little horse shoes on the map above just weren’t lining up.  We never did find Mustang Trail and we looked!  We may have been closer to Lariat than the night before, or not.  The (worthless) trail map said the Lariat Trail was just shy of 3 miles.  My GPS sais we rode 7.8 miles.  Maybe we rode them twice around.  Or not.  We didn’t get arrested anyway.


We quietly packed up and headed back to Medicine Bow.