Recently I had a reader mention that they are getting ready for their first big trail ride which includes overnighting with their horse and she was looking for tips for a successful weekend.

First, if anyone told me twenty years ago that I would enjoy camping, I would have doubted it.  Although as teenagers, we used to sleep in our cars or in someone’s boat at the lake, it was only because we didn’t want to drive home and go back the next day; camping for convenience.  But when we got our horses and then started really trail riding, camping just seemed to be the next step and there was no turning back.  I really love to camp – with my horses. 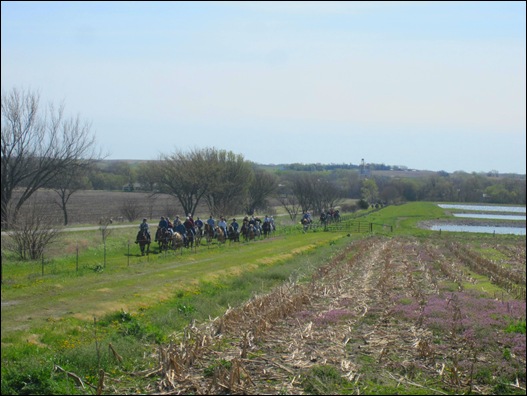 As a rule, I don’t usually go on the “big rides”.  My first attempt was pretty unsuccessful – not because of the ride but because neither our horses nor I was ready for it.  Hosting the Friday Before Mother’s Day Ride is about as big as I get anymore but I do love hearing about the other rides and they are quite popular among riders in this area. 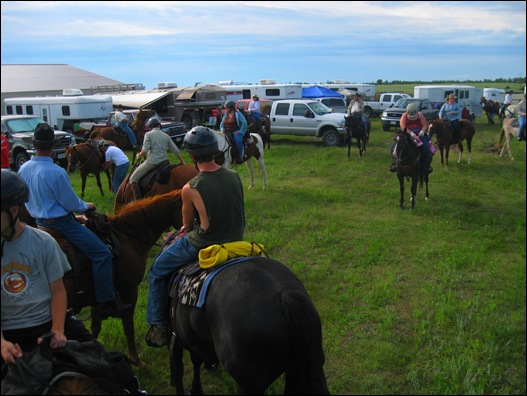 At the big rides, most of the time meals are included.  So I won’t spend a lot of time talking about food except that you should try to have a snack in your saddle bag.  I’ve gotten low on blood sugar before when riding and a stale granola bar from my friend’s saddle bag held me over until we could get back to the trailer.  But otherwise, I hear the meals on these rides are wonderful. 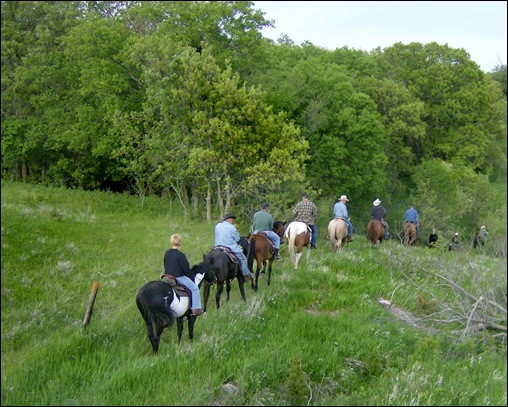 If it is the first time you are getting your horse out in a group, I would suggest you ride with a smaller group a time or two just so you know how your horse will behave (and even then, there are no guarantees.)  Some have no issues at all with group size, while others may go bonkers. If you know where your horse likes to be, try to jockey for that position.  You can’t pass the trail boss but if your horse likes to be up front, head in that direction.   John’s mare, Ginger, always wanted to be the lead horse and at times could be quite a handful if she found herself in the middle or the end.    In my opinion, riding with 200 other people is not a good environment for a training opportunity.

Red ribbons on the trail of a horse tells you the horse is a known kicker.  Stay away from those horses.  A yellow ribbon will sometimes be worn by stallions.  I’ve ridden with stallions that behaved as well as a gelding but I’ve also heard horror stories of them mounting mares on the trail.  Just know what the ribbons mean and keep your distance. 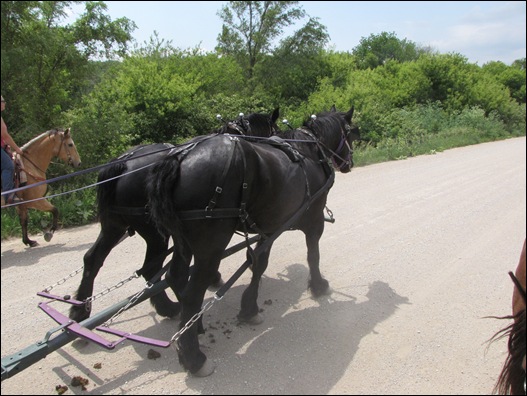 The rides are generally not fast rides.  Many times there are wagons going with the groups and going through cow paths may slow them down.  Be prepared to wait.  When riding my first big ride, those wagons were my downfall.  The horse I was riding spooked terribly, reared up, fell over and left me on the ground while he high tailed it for safer ground.  Windy is a little high headed over wagons today and I always start her out behind them so she can watch.  It usually doesn’t take much for her to calm down and if one comes up behind us, I do pull her over and turn her around so she can see what is coming before it passes us.

Most of the time it is frowned upon if people are running in the group.  Some rides may allow riders to leave the group to stretch their legs a bit, but changing your gait among a crowd of horses is usually a no-no. 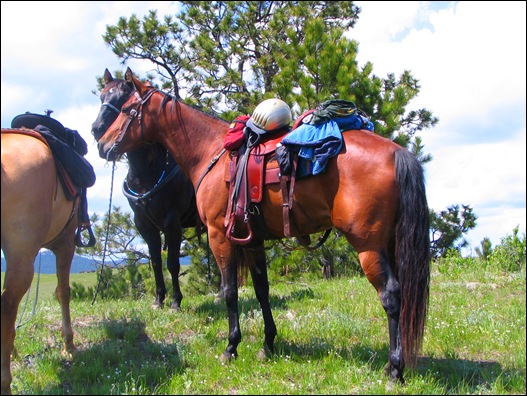 It goes without saying to make sure your tack fits nicely on your horse.  There is nothing worse than finishing a ride and finding your horse has a girth rub or a sore back.  Place saddle bags firmly on the saddle so they aren’t banging around.  The picture above is probably a good example of what all I bring on a ride but not necessarily how I pack it.  Before taking off, I would roll up that denim coat a little more snuggly under the cantle of the saddle.  I will also tighten my rear cinch a bit more; they tend to loosen up as riding.  But I did want to illustrate the gear and this one shows it nicely. 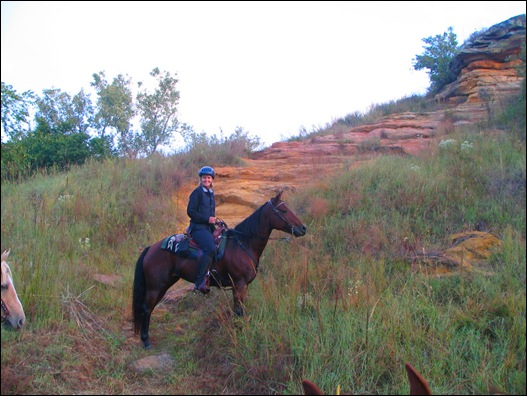 Sunscreen, comfortable jeans or riding pants and a rain slicker are all things you should carry on your saddle as well as plenty of hydration.  Water or tea is much more refreshing than soda or beer – at least until you dismount and find that camp chair.  Pack as much water as you can fit in your saddle bag.  There is nothing worse than running out.  I also like to carry a sweatshirt.  This time of year, the weather can change quickly and slipping a fleece jacket on when chilly can make a world of difference those last few miles of your ride. 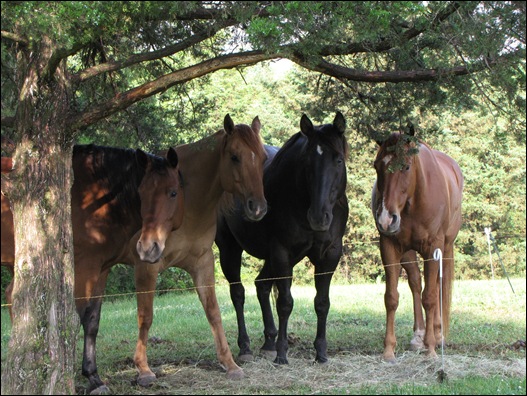 Figure out in advance how you plan to stable your horse.  Leaving it in the trailer overnight is usually not a good option.  You will want to tie to the trailer outside or set up fencing of some sort.  We most often use electric fencing set up close to our trailer.  Once again, you should try your set up at home before coming to a large ride to make sure your horse is comfortable.  Bring a good sized bucket for water and his own hay and grain.  In the fall, I usually will bring a waterproof stable blanket.  One, to take the chill off at night as the horse won’t be moving around in his makeshift corral like he usually will and secondly, if it does rain, I won’t have to saddle a wet horse come morning. 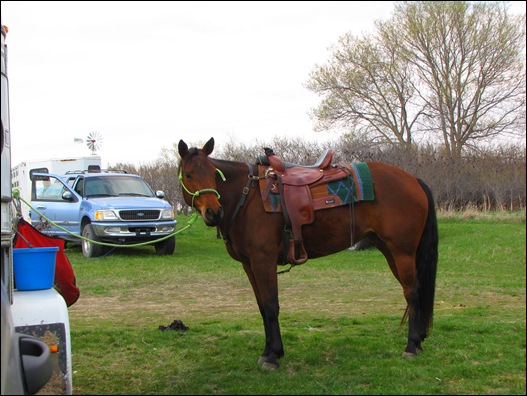 If you tie to the trailer, measure the rope so when tied, the hook is about 10” off the ground.  That will give him enough room to eat and drink and lay down, but most often, not enough rope “to hang himself”.   Tie a hay bag near the horse to he can easily reach it or place hay at his feet.  Also include a bucket of water and if possible, secure it where he is tied.  (My rope is a little long in the above picture but it does show placement of feed bags and water bucket.)

Before you leave, start a list of items you need for your horse, from hay to tack.  And then do the same for yourself.  Don’t worry about forgetting something; at rides like this, someone always has a spare something!  Just relax and have fun.