Both vets assured me if she were their horse, they would have made the same decision.  My friends rode off, the P & R crew drove off and I waited in a parking lot with some mountain bikers for a volunteer to fetch a trailer to take us back to ride camp.

Windy was still quite anxious when I tied her back at my trailer.  Since the vet had said she was a bit gassy, I took her for a walk and let her graze.  This seemed to settle her.  I was high enough now that I could get a weak signal and Googled “heart arrhythmia in horses”.  I learned that it is not necessarily uncommon and is usually determined by poor performance.  That was somewhat reassuring because Windy has never had problems conditioning and I always have more horse left at the end of a ride.  We have done four CTRs and this has never been detected before so while its possible she could have some sort of condition, I will probably just chalk it up as one of those things. 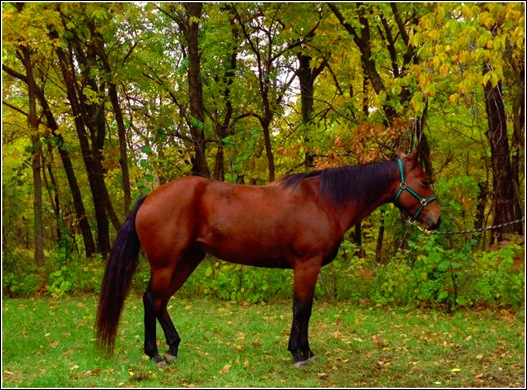 She finally quieted and I tied her back up to my trailer and she rested while I packed to leave.  Later I sat with the timers as some of the novice riders started to come back in.  Many were close to going over time; some did.  Only a couple of open riders made time; most were late.  I was told the trail conditions did not improve; only worsened.  For the first time since we pulled, I was glad I wasn’t in the mix of it.

When the vet made her trailer rounds later in the day, she checked Windy thoroughly.  Her heart rate was normal as was her heart beat.  Her gut sounds were fine and she was well hydrated and had good color.  She suggested that before rides like this to consider use of electrolytes to keep her blood levels normal.  Now that I know what to listen for, check her heart occasionally for any abnormalities in heart rate.

When a horse sustains some superficial injury, I flippantly say “it’s a long ways from the heart.”  In this case, it was the heart:  her heart and mine.