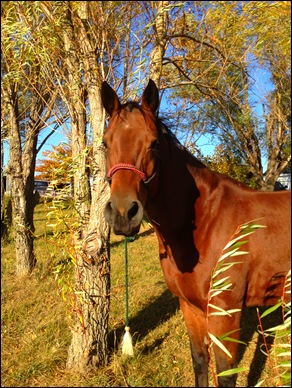 It’s the time of year where I try to chug down the last taste of great fall weather; savoring every drop.  We’ll have a few good days and then a preview to gray November.  Yesterday was 81 degrees and sunny; today its hovering in the 50’s with strong gusty winds.  Before long we will have more gray days than nice ones; not to mention the end of Daylight Saving Time.  I tell you, if one of those candidates wanted to seal my vote, he should campaign for leaving Daylight Saving Time all year long.  Or better yet, “fall ahead” another hour!  Getting home from work when it is dark is so utterly depressing.

Just when I think I had the last camping trip of the season, the weather changes and there is an opportunity for just one more!  A friend is coming back to Nebraska for a visit this coming weekend and the weather is promising 70 degrees and sunny so it’s a last hurrah camp trip and ride with some girlfriends.  My friend will ride Fancy.

I needed to use my horse trailer to go pick up a golf cart and took out the dividers so that it was completely open.  My trailer is a two-horse straight load, but is very roomy.  We often wondered if we could get a third horse in there if necessary so decided to give it a try. 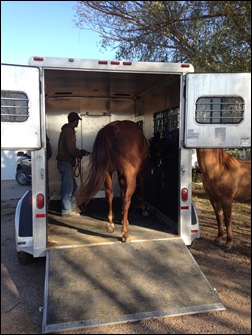 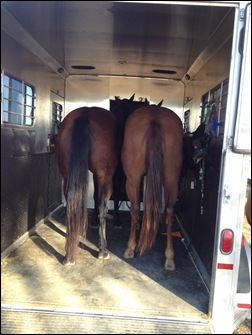 We loaded Fancy first and then Windy.  Although in the herd, Windy is higher in rank than Fancy, they get along well and wouldn’t be bothered by the other.  Either one of these mares could have been loaded first but the goal was to have Windy in the middle. 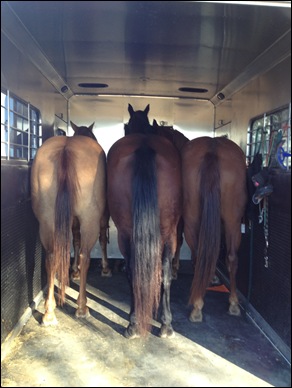 We brought Butter in last.  Windy is boss mare over Butter but not assertive.  Butter and Fancy could not be next to each other because Butter is quite aggressive toward Fancy.  This configuration seems to be peaceful.  There are tie hooks to the left of Butter and to the right of Fancy and in front of Windy.  So all of them could be secured so they do not jockey for another position.  I had envisioned that they would go in at a slant, but this seemed to work better.  I don’t foresee us traveling this way but its nice to know that if we needed to in a pinch, it could be done.  Since we also have a bumper pull 2-horse trailer, we now know that we could get all five horses off the property at one time should we need to, albeit the fat-butts (Blue & Baby) would be in the smallest trailer. 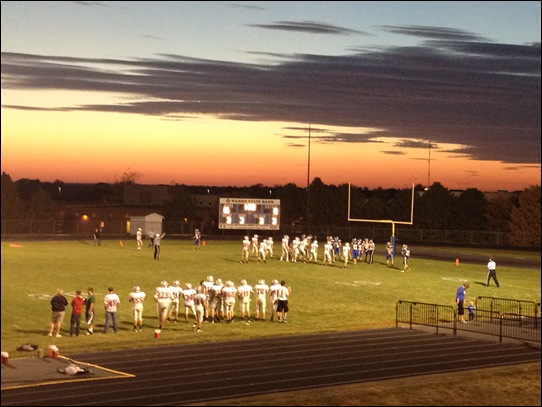 On another subject, tomorrow is most likely our last football game of the season.  It was a rebuilding year of sorts for Case’s team as 20 players graduated last spring.  This year’s team probably will not make it into the playoffs, the first time in many, many years.  The weather at the Monday night game was just about as perfect as this picture – which I think seems almost nostalgic; a slice of life shot.  Tomorrow’s weather is to be one of the gray days; windy and cold.  It will be a miserable time on the bleachers.